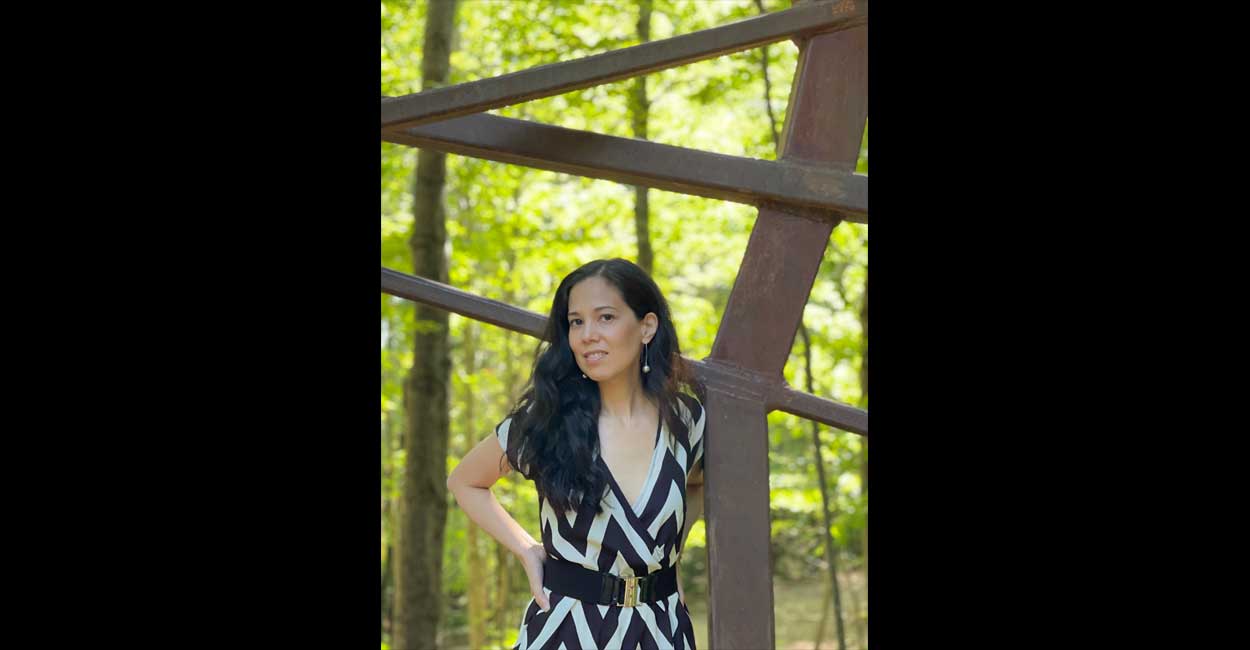 Atlantic Canyons (aka Andrea Levesque) is a mother of two, a baker, and a life-long musician who discovered her passion for the arts in her youth. In college, she joined her first band and has played in various groups since then, which led her to start a solo career with her debut EP.

A fiery passion for playing music was lit within Levesque in childhood as she learned to play piano and violin. After graduating high school, she dedicated her life to the sciences, eventually attending law school. Now, Levesque feels ready to connect to her true identity and uses music to digest life’s traumas, a therapeutic escape that helps her process thoughts and emotions she’s carried throughout her life. As she prepared to release her first EP, she felt happier than ever, relieved to allow the hidden parts of her life to come forward. “I really love feeling a sense of personal connection when the music resonates with other people,” Levesque shares.

It wasn’t just conducive, it facilitated the whole process of creating my album, See The Hue. I’m a very social person, and my biggest obstacle to creating music was that I was so isolated musically. I don’t do well creatively in solitude. I need to be talking to other people. I’m at a stage in my life where I am not plugged into a local music scene (I live in rural New Hampshire!) and it’s been so long that I’ve lost ties with all my former musician friends.  The pandemic forced people into online communities. That’s how I found my music scene. I was constantly collaborating with friends I met online, and through this community, I was able to complete the album. It’s ironic, as a musician, I felt far more isolated before the pandemic than I do now.

Have you always been interested in music? Was there a particular experience that made you say “Woah! I want to do that!”?

I remember being a kid and playing violin in my string orchestra class. We were playing something simple, but at one point I noticed that the other kids were playing something different than what I was playing. I hadn’t noticed it before, but the cellos, basses, and violas were all playing different parts, and they complimented my part. At that age, it had never occurred to me that music is made up of lots of different instruments playing different parts that come together to make up the song. I don’t know why this concept was so novel and fascinating to me, but it was. It kind of blew my mind to be playing in the middle of something with everybody else playing their own thing. I think that moment lit the spark. It gave me a little rush. I still get that rush now when I perform in a group, it’s magical to be a part of something and be able to hear how beautifully everything fits together.

YES! This is exactly how I do it! How did you know? A lot of times I’ll be going about my day, and a little 8-bar or 16-bar tune will pop into my head. I try my best to quickly record it into my phone before I forget it (discreetly, so as not to embarrass myself in public). When I’m ready to sit down and start a new project, I’ll go through all the recordings and see if any of them strike me. These tunes can end up being a verse, chorus, or instrumental riff. It’s really fun to see the progression from badly sung nonsense on my phone into a fully produced song!

Ideas come to me at the most random times, and the worst is when I’ve just gotten into bed at night and this really nice idea pops into my head – it almost feels like someone tapping me on the shoulder and being like “pssst! Check out this idea!” Sometimes I’m just so exhausted that I decline the offer. Just too tired. But then I feel bad about these songs that will never exist because I couldn’t be bothered to get up and hum a tune into my phone.

I *love* it. For me, recording and production are all part of the songwriting process. I do them all at once. A lot of it is trial and error. I start off with an idea for a tune, like how I described before, and then I build around that. Sometimes the original idea gets swallowed up into other ideas that happen during the recording/production process. It feels a little like putting together a puzzle. You always start out with a similar approach, but the way it comes together is different every time.

Where was your current project recorded? Was anyone else involved in writing, recording, or producing the songs?

These songs were all recorded at my home in New Hampshire. I had two friends get involved in the later stages of production of some of the songs. One guy is a producer based in England called Striped McCoy. The other is a dude from Chile who has a post-rock project called Letters to a Younger Self. I loved working with them. They challenged me on creative decisions, and I really liked that. At one point, I asked Striped to send me a version of See The Hue with changes he didn’t agree with. He titled the file “You’ve Been Warned.” He was right. He totally won that round.

I also had a great group of session musicians supporting me! Most of them were folks I’d met on an indie music Discord server. All friends who helped me out because they love music. I had two cellists, several guitarists, and a drummer. All spread out around the US and abroad. Only one person, one of the cellists, recorded here in NH with me.

I recently finished up a series called ‘Queen of the South,’ it’s about a woman who rises to the top of a powerful drug cartel. It partially inspired the lyrics for ‘Life at the Top,’ just watching these characters forsake life and family just to jockey for more and more power and money.  Also had a really satisfying happy conclusion in the final season.

I was so irrationally afraid of ghosts. Terrified. It was so bad that I would sometimes go almost an entire night without sleeping. I remember I couldn’t fall asleep until I heard my big brother wake up really early to get ready for high school, and then I’d be able to sleep until I had to wake up a few hours later. Fucking ghosts!

Chinese. I’m half Chinese and have family in Taiwan. Also, that’s like an additional 1 billion people you can talk to.  I’m a mad extrovert, so this appeals to me.

Haha no. I suck at that. I’m only useful in the following very specific categories:  classical music, chemistry, law stuff. I don’t know sports, famous actors, tv shows or any of that other crap.

What movie/series ending really frustrated you? And how would you change it?

Game of Thrones. I mean come on, who didn’t it frustrate? Here’s how it should have ended: Both Jon Snow and Dany die, but not before their baby, a girl, is born and raised by Sam and Gilly. Sam becomes the steward of Westeros, and during his reign, he implements policies that slightly resemble modern democracy. Cersei survives but Jamie dies protecting her. She gets sent to the wall to shovel horse poo until she apologizes to everybody. Varys survives, and he, Davos, and Tyrion open a wildly successful grocery store chain. Gendry starts a record label and signs Ed Sheeran.

Featuring seven alluring tracks including “One More Minute” and an entrancing title track, See The Hue is a delicate reflection of Atlantic Canyon’s past experiences, a creative outlet she leans on to digest life’s traumas and connect with her true identity.

See The Hue is documentation of self-discovery, a journey that allowed Atlantic Canyons to blossom into the happiest version of herself. “It bears witness to feelings of fear and loneliness, and there is catharsis in acknowledging unpleasant emotions,” she reveals. “By allowing myself the freedom to experience these feelings without judgment, I became unburdened by them.”

See The Hue is the beginning of a new chapter for Atlantic Canyons, an opportunity to grow as an artist and establish peace with life.