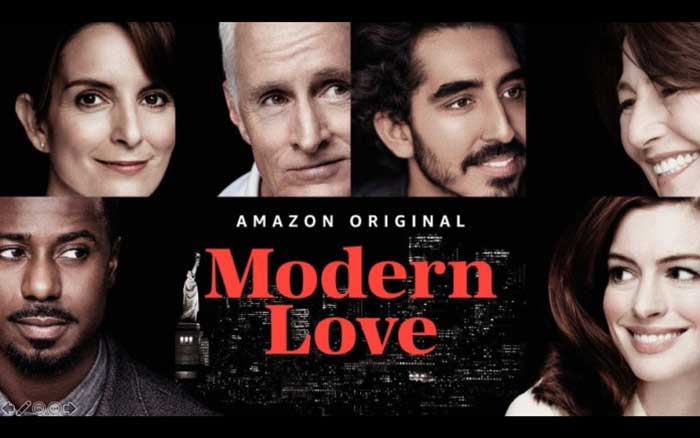 Produced by Amazon Studios, Modern Love is a romantic comedy anthology series, inspired by the beloved weekly column of the same name in The New York Times (NYT). The series was recently premiered on Amazon Prime Video on October 18.

The unique thing about the column is that all the love stories are provided by readers. To qualify for publication, the stories must not be fictitious, and the contributors’ real names will be published.

For the past 15 years, the column has enjoyed enormous popularity. The TV adaption is based on eight previously published column entries, and it features a stellar cast, including recent Emmy winner Julia Garner, renowned Hollywood actress Anne Hathaway, and Irish actor and Olivier Award winner Andrew Scott.

The first season has eight standalone episodes that explore love in its multiple forms in modern society. For example, in “When Cupid Is a Prying Journalist,” a business reporter interviews the founder of a dating app, and a seemingly innocuous question causes both the interviewer and interviewee to reveal their own love story. And the article was written by the reporter also leads to the reconciliation of the interviewee and his former girlfriend.

In “Take Me as I Am, Whoever I Am,” the producer portrays the love life of a bipolar woman through a musical. While changes are made to the way how the story is narrated, it remains faithful to the source material.

From a cultural studies perspective, Modern Love turns the production process upside down. In traditional TV production, the director or producer usually lays down the story blueprint and determine the number of episodes, or the production crew is divided into several teams where they collaborate on scriptwriting for multiple episodes. The scripts will then be combined, followed by final revision by the showrunner. In other words, the production team leads and shapes the story development, whereas viewers have no involvement whatsoever. Modern Love, on the other hand, is the opposite. Stories are provided by viewers, and the production team plays a refinement role. As such, the storytelling is more authentic, and that makes it easier to connect with viewers.

Another reason why the true story is popular is that it breaks social taboos. Modern Love delves into controversial topics, such as love triangle, May-December romance and gay adoption. As the series is based on true stories, Modern Love normalizes social taboos and helps audiences to take a peek at different kinds of love. As said by NYT editor Daniel Jones, the fascinating thing about Modern Love is that it helps viewers to develop empathy and senses of intimacy and affiliation. As each episode is self-contained, Modern Love can attract diverse viewers.

As the title suggests, Modern Love refers to love in the modern age. This then begs the question, is “modern” love any different from love in other periods? On the surface, Modern Love showcases the dazzling love one can find in modern society, such as long-distance relationships, online romance and casual hookups. But the eight episodes have one thing in common – the loneliness and isolation of city dwellers.

In “Rallying to Keep the Game Alive,” a middle-aged couple who have been married for many years seek help from a therapist to maintain their marriage. During the therapy, they keep on reflecting on the meaning of marriage. Through scenes of playing tennis with each other, the episode tells us the problem stems from the couple’s unwillingness to compromise. After speaking from the bottom of their hearts, both of them manage to rebuild their rapport with each other on the tennis court.

“Hers Was a World of One” is an episode that reflects the current state of affairs in the United States. A same-sex couple wants to form a family but they encounter enormous difficulties when trying to adopt a child. As it turns out, this is due to their sexual orientation and the Christian church’s non-acceptance of homosexuality. Things begin to change when the intermediary refers to a couple of homeless single moms. The couple spends time with the mom during her labor, and this period sees the breaking up of the class, sexual orientation and racial divide.

When the lead male character asks the mom whether she would change her mind and raise her child, she makes the painful decision of allowing the couple to adopt her child, as she feels guilty of being a single mon and wants her baby to be raised in a two-parent family. At the end of the episode, the lead character who is white and middle class, tells the adopted kid how brave his biological mom is. In doing so, he overcomes his initial prejudice and discrimination against homeless women. The story gives a fine portrayal of the issue of wealth disparity in society, as well as the love of parents towards children.

The success of Modern Love lies with love, a forever popular topic. Throughout the history of humankind, there have been countless literary works based on love. But the only ones that enjoy immortal popularity do not touch on great philosophies of love but rather deal with unspeakable or painful elements of love.

Jones opines that love is not just a concept but also a lively and vivid experience. He describes love in the modern era is akin to something that is tightly wrapped. Only through words or stories can we reveal the joys and sorrows of modern love.

Modern Love might not be able to provide answers to all the questions about love. The magic of the series rests with the ordinariness of the stories – there isn’t any groundbreaking plot and the stories are authentic that viewers can relate to.

After all, this is what real love is – it is both sweet and bitter.

Tips To Beat the Stress of Holiday Traffic