For 7 minutes we all take a shower in the early morning, at a temperature of 99°F, under a wall mounted shower head. Sound familiar?

You may think your showering regime is normal, but have you ever wondered about those people who use their phones in the shower? Or those women who clip their nails at a moment when showering should be a haven of solitude? GROHE, a leading shower brand name around the globe, came up with a study on this daily ritual to reveal some interesting shower trends, facts, and habits so you can check out how normal your daily shower routine actually is.

How long do you take to shower?

The average person showers for around 13 minutes, but according to the study, consumers wished it could last 5 minutes longer.

The most popular shower head

Nearly half the participants indicated they presently have a standard-size, wall mounted showerhead, but the most liked are wall-mounted rain showers.

I didn’t see this coming, but the study found out that men are using their best shower systems more than women (7 times weekly versus 6.4 respectively). 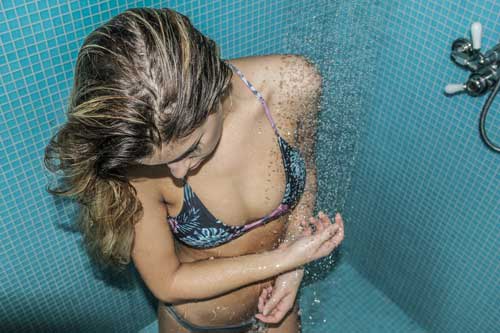 Which country showers most often?

I`m sure this will surprise you, and will even make you eager to know where your country ranks when it comes to showering. According to the study by GROHE, the research found that over 90% of Mexicans shower daily, compared to around 70% of Americans. Australia was the second best showering nation, followed by the UK, USA, France, Germany, Russia and China. The same study found that only 25% of Chinese males shower daily.

67% of people who participated in the study revealed that they use showering time to reflect on topics such as relationships and family, along with thinking about household chores and work. The same study discovered that 63% used their showering moment to sing something that brought them a feeling of happiness and relaxation in a place where no one can see or hear them. In the same breath, women were found to be more inclined to spend 16% of their showering time to think about chores and family issues than men. 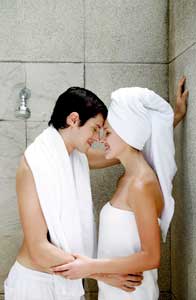 Only 63% of Americans share their shower time with a companion or significant other. It appears that many visitors at Hilton hotels are either set for romance, or abhor being alone. The hotel chain’s study discovered that 29% of people at times bathe or shower with another person, and almost 15% of them said they “made love” in the shower.  And speaking of intimate moments, a Nielson study found that over 75% of females pee in the shower.

Showering and what goes down the drain

45% of Americans pee in the shower, but they would never admit it. According to the study, 23% of these people thought peeing to be more economical and hygienic.

Hand washing after bathroom use

A whopping 94% of participants don’t clean their hands properly before leaving the bathroom, based on another study carried out by researchers from California State University. To kill germs, the Center for Disease Control recommends that you wash your hands thoroughly with soap and water for 15-20 seconds. Researchers discovered that folks instead clean their hands for around 6 seconds at most. As if this is not enough, around 15% of men never wash their hands at all, compared to 7% of women. Likewise, only 50% of males use soap in contrast to 78% of females. Eek!

According to another study by Ogilvy marketing agency, 75% of Americans have taken their Smartphones into the shower room. As a matter of fact, 20% of women and 30% of men don’t even bother going to the shower without them. Could this be the reason why the University of Oxford discovered that 1 in 7 phones have ‘fecal matter’ on them? And what’s the purpose of having a Smartphone in the shower? Well, it was found that 45% use them to call people, and another 45% use them to check their social media profiles. A study by Nielson also discovered that 45% of young people access adult content compared to 21% of adults. Whatever the reason for taking a Smartphone into the shower, I just hope they’re not taking selfies!!

Booklovers should enjoy this one! 63% of people read newspapers, books, and magazines while in the bathroom according to the GROHE study. Males and people aged below 34 are more inclined to read in shower rooms than any other demographic segment. 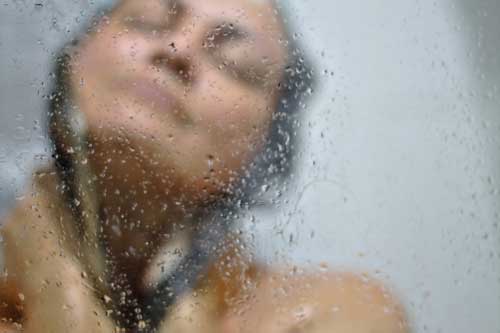 Showering and standing …. or sitting?

Some people call it the biggest washroom controversy of all time, but when you are in the shower do you stand or sit? GROHE surveyed over 4000 people and discovered an almost even result down the middle. Around 56% of participants stand up, while 44% remain seated. Unfortunately, those polled did not recognize there were several ways to wipe.

Whatever the reason, the Hilton study revealed that 3 out of 5 individuals sing in the bathroom. While country music is the favorite genre, 12% preferred rock, 10% favored pop, 7% classical and 5% preferred alternative.

The Elderly and showering

Older people have conservation concerns when it comes to showering, based on the GROHE study. According to the study, seniors find shower time a waste of water. While 70% of 18 to 34-year-olds take showers for around 10 minutes, only 27% of people aged over 55 years exceed this mark. Now for some encouraging news. The same study revealed that 82% of people switch off the water while brushing their teeth.

Finally, a kind reminder. Mind your manners in the bathroom. According to a British study, around 7 to 10 people think that leaving the bathroom filthy is the most annoying thing one can do. Also on their hit list is snooping in someone’s drug cabinet. Remember, the shower room is a sanctuary, friends. Always respect that, and you will all be better for it.

Essential Tools You Need To Work With Asphalt

3 Health Complications Covid Can Cause