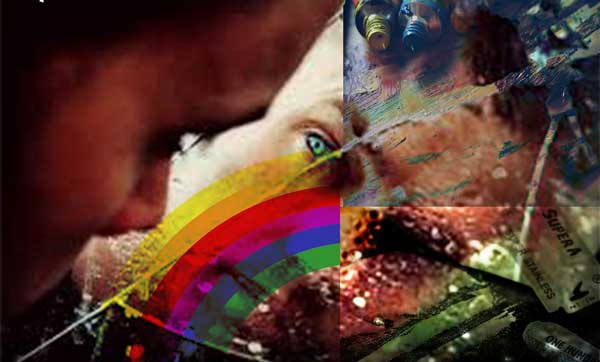 Firstly, I would like to thank all of you for your warm welcome and support. The response I got to my first column article was pretty overwhelming. So, I’m not feeling any pressure whatsoever to deliver something bigger and better this time. Not at all (he writes laughing).

Right, so let’s get down to business. Last night the Jimmi Choo’s, tiara, and silk gloves came off, and I was anything but a senorita! The East End London barrow boy inside got a grip on me, and I was a furious and foul-mouthed geezer.

Why? Because a best-selling author friend of mine who writes LGBTQ erotica, a single mother putting her child through college, and totally dependent on the royalties from book sales got attacked and slammed (by various people, and other authors if you can believe it?) on social media for trying to prevent people from pirating her books.

I won’t quote what my initial reaction was because it was extremely foul-mouthed and there may be minors reading this (and my reference to a “minor” is very deliberate as you’ll see.)

So, there was a lot of talk on this thread. The general consensus was that these people need to be held accountable for their THEFT. As it states at the beginning of my books, and those of other published authors “Criminal copyright infringement is investigated by the FBI and punishable by up to 5 years in federal prison and a fine of $250,000 – so it’s an illegal practice and theft!

I’d already looked at the profiles of the people who were exposed as thieves, and there was one that particularly caught my attention, because it shocked me, and they formed a large part of the conversation. My friend exposed this person and reported them to the head of their college for pirating her books. The response my friend got was staggering! They slammed her and voiced their concern that the thief in question was a “minor” and by exposing her theft/piracy would “out” her to her family. Yeah right! On so many accounts. If this young lady (and I will refer to her as a young lady, because she looks about sixteen or seventeen) is old enough to read LGBTQ erotic literature and smart (or unsmart) enough to become a “public librarian” in the LGBTQ community giving our books away for free, then she’s not a “minor” in my eyes by any stretch of the imagination. By that age, I had a responsible job, was earning a respectable salary, and was held accountable for all my actions by my employer and parents. She knows exactly who she is, and what she’s doing. And it makes me angry that people defend someone who is acting like an adult, taking adult actions, and then waving the “she’s a minor card” – sorry, that just doesn’t wash with me!

Please don’t think I’m singling out this particular person because there were a lot of people who’d clearly overlooked the page about copyright infringement, or who’d simply chosen to ignore it when they really should have known much better (real adults). It’s just that it made me question, why this young lady would decide to do this when she’s probably been guided well by her parents and teachers, yet decided to go against all the good advice she’s been given? So, I hope this article brings it to peoples’ attention that copyright infringement is a punishable offence, and for good reason.

You may not like me, or agree with me, for writing about this, but it’s something I feel very strongly about. I also realise I may lose some followers at this point, but as Catherine Tate, one of my favourite British comedians would say, I ain’t bothered! The reason being is, people who pirate our books, and those who defend their actions are not the kind of followers I want to attract. In fact, they’re the kind of followers I want to avoid, and if they have any sense they won’t cross our paths – you’ll find out why in a minute!

My favourite and most memorable quote in response to this thread was from one of my newly found friends, and a reader of my books. I quote “If somebody wants a free book, there’s a thing called a library.” She nailed it for me. And, it also made me think there are many authors who give their books away just to get their name out there. So, there are alternatives to pirating books if you love reading, but can’t afford to buy books…

Published authors, like myself, are restricted and governed by our publishers, for a good reason. A good friend and fellow author, Sean Kerr, recently published a very pertinent and enlightening article entitled “Would you work for free?” It highlights how much time, effort and money goes into bringing a book to market, and that is something that shouldn’t be ignored. Think about it…would you work for free? I suspect the answer is NO! So why should us authors work for free? If people are still in any doubt, or can still justify their reasons for pirating books, then check out his article: http://www.deadcamp.com/single-post/2017/01/16/Would-you-work-for-free

Us authors have not spent years of our lives and invested our own money in promoting our books, just for people to give them away at liberty. That is not only a criminal offence, but it’s a pure insult to authors, and their publishers, who have invested shed loads of time, energy, and money into getting books to market.

I don’t ask for much, and all I ask of anyone is that you be respectful to the author community. Many of us rely on royalties for a living, so please take that into consideration before you decide to give away one of our books to thousands of people on the internet. I don’t have an issue with my paperbacks being shared around among a few friends, but I do object when I know they’re being made available to thousands of people on the internet illegally. Then I know I’m losing out on money that I need to support myself, and that doesn’t make me happy!

Before I end, let’s go back to my point about not crossing me, or other authors. People need to recognise that we are a very close community, so if you decide to take an individual author on, you take a whole community on. And that community, of both authors and our readers stick together. My friends on social media have countless contacts, and they spread the word about pirates and thieves, so these people will be caught out and exposed. I alone, not to mention my friends, belong to a lot of book clubs on social media, reaching an audience of over a million people, and I post on them regularly (as this article will be), so news will spread.

As you can read in my third book ‘Sun, Sea, and a Contemporary Art Gallery’ I have had to deal with people in person who tried to intimidate me and lean on me, on a number of occasions in the past, and made some very good friends as a result of that experience. Enough said.

As this and other articles published by my author friends demonstrate, we also have access to “The Media” – and we all know how powerful and influential the media can be. So please, just think twice before you decide to share an illegal copy of a book, set up an illegal pirate site, or decide to go into battle with an author because the likelihood is, you will be exposed and held accountable for your actions…

Then, there’s my adopted mother, Olga, from Puerto Rico. She forms the topic of my next column, but all I can say is, you don’t wanna mess with her. She is the most wonderful person in the world, but if you cross her, or me, then woe betide you. She is the fiercest seventy-year-old I’ve ever met! You’ll get to hear more about Olga in my next column.

Right, changing the subject, and moving onto a brighter note. It’s sunny, 20C/68F here in Tenerife, and it’s January! Hope you are not all suffering too much with the sub-zero temperatures. Now, what should I do? Go to the beach, or have a nice cold beer? Oh, the decisions you have to make in life!

That’s all, for now, folks…

See you in a couple of weeks, LJ.

Like Loading...
Previous ArticleKehlani – SweetSexySavage
Next Article Music Review: Christina Rubino’s Down to the Sea Reviewed by Layla Dorine