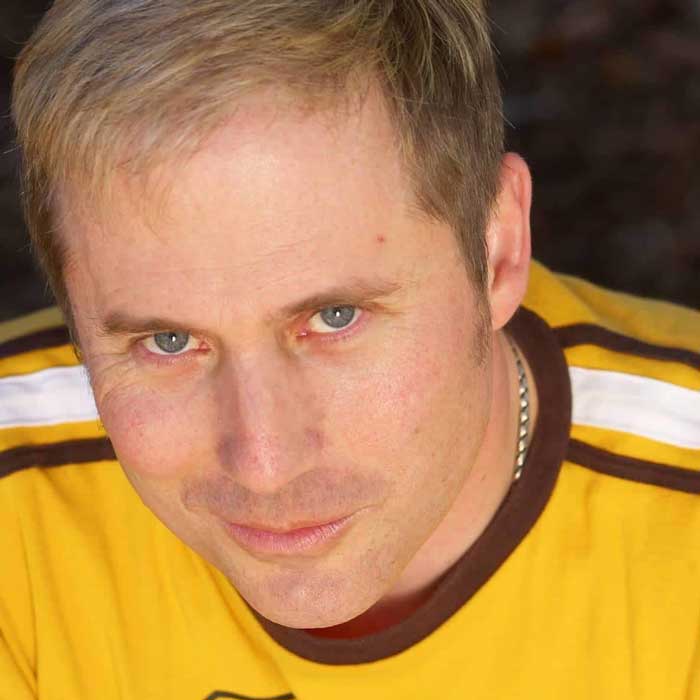 He is best known for his feature film roles in Saltwater (also starring Ian Roberts), Homewrecker (co-starring Rebekah Kochan) and his role as Nelson Van Eddy in Old Dogs and New Tricks (on Prime). Bruce has worked with some of the biggest names in the industry, particularly in the LGBT field: Greg Louganis, Ann Walker (she is known for Sordid Lives), Ian Roberts (openly gay rugby player), Rutanya Alda (“Mommie Dearest”), Rebekah Kochan (known for the Eating Out films), Ron Jeremy (adult film star), Brian Nolan (The Lair series), Dylan Vox (The Lair and producer of the Sharknado films) Jason Stuart (Birth of a Nation) just to name a few.

We caught up with Bruce to discuss his new film appearance, future projects and his thoughts on LGBT entertainment. You’ve been getting a lot of attention lately on social media for your film and TV roles.

That’s true. I think the sudden interest is due to everyone “sheltering in place” so there’s a lot more streaming going on. And since many of my films and TV work are on streaming platforms I guess people are watching them.  Hopefully, they’re enjoying them!  I’m watching a lot more “content” as we like to call it now myself.  Although I’m NOT watching my stuff!!

Do you have a favorite film or TV role?

Tough question. Because in general whatever project I’m currently associated with is my favorite! But looking back I’d say I count among my favorites my role as Nelson Van Eddy on the digital series Old Dogs and New Tricks. It’s so much fun to be mean and yes bitchy.  And my role as Collin in Homewrecker is a favorite. Quite the opposite of Nelson!  Incidentally, the entire Old Dogs series can be watched on Prime.  And Homewrecker is on both Vimeo and GayBingeTV.  And it’s coming to some other platforms as well.

You write, produce and act correct?  Which do you do the most?

That’s right, I’m what they call a triple threat! Just kidding. I’ve probably done more acting than producing. And certainly more writing.  In the past, I had a writing partner, Paul Vander Roest, with whom I wrote and produced a ton of theater in Los Angeles. For films, I’m writing and producing with my brother Paul Hart, who is also a director. And no, I don’t direct. I think it would waaay too stressful! As an actor, I audition frequently for other people’s projects. I don’t just produce films to feature me. And sometimes I’m lucky and they cast me!!  And I am often a silent producer for other people’s projects—meaning I give them funding but don’t take a producer credit.  There are a few of us out there that do all three. Leon Acord who wrote and appears in Old Dogs and New Tricks and Jeff Willy who wrote and stars in Reveal. Very talented guys!

Speaking of other people’s projects, tell us about your new film Reveal.

Reveal is a film I auditioned for via self-tape. When I saw the character of Uncle Gary on the casting notices I knew I wanted a shot at playing him. And I got lucky!  The film is a gem. And it was the first time on a set where I didn’t know anyone. Usually, there’s someone on the crew you know or maybe an actor. I found that refreshing because it gave me a chance to get to know a whole new group of professionals. And what a great team they are! Reveal is a love story starring Jeff Willy and Sean Leon. As the film transpires we find that Jeff’s character Andrew hasn’t come out to the family yet and he’s bringing Sean Leon (playing Ethan) to a family gathering—a gender reveal event!!  The director Rich Varville did an excellent job drawing out the performances and the cinematography was wonderful. On another note, we shot some of this on actual movie sets which is always a luxury for actors!!  Playing Uncle Gary gave me a chance to do a role with some comedy and a bit of poignancy.

Where can we see Reveal?

It’s currently on the festival circuit. And of course with all of the “shelter in place” rules, it’s becoming a favorite of the new “online” festivals. It was recently nominated for a “Best Ensemble” award!!   If you follow the film on Facebook or Instagram you can get more details. It’s so far been picked up for the following festivals.

You mentioned streaming platforms; do you anticipate we’ll see more of them?

Oh absolutely! There are mainstream platforms like Prime, HULU and NetFlix of course—but there are a bunch of niche platforms that focus more on LGBT content. One of my favorites is GayBingeTV. They have a huge catalog of films and episodic shows that focus solely on LGBT content. They can be accessed via Roku or if you have a Smart TV it’s as simple as adding the icon to your television. And I give them props for making some of the content free during this period of “sheltering in place”. I have two of my films on GayBingeTV,  Homewrecker and Open. And I believe some others that I appear in—but I did not produce—such as The Trouble with Barry are on there. Almost everything else I’ve been in can be found on Prime or Vimeo.

You keep busy. What’s on the horizon?

Thank you! I try to stay busy. And right now is the perfect time!  I have a new TV movie script in development with my production company VanderHart Productions. My brother and I wrote the script and we plan to produce it hopefully for Lifetime.  And we have a cool LGBT feature film in development. Of course, it all depends on funding before anything can move forward. And of course, I keep busy auditioning! I tell people that for every role you see me in I’ve probably auditioned for 25 projects prior to get that single job.  Competition for actors is fierce!!  The Old Dogs and New Tricks cast may reunite for one final special that wraps up everyone’s storylines—which I hope happens.  I love working with that team.  More to come!!

Where can people find you on social media?

On Facebook, I have two pages. One page is for friends and one that’s more show business related. Please look me up! On both, I’m Bruce Hart. Just look for my photo. On Instagram I’m Bruce384 and on Twitter, I’m Bruce Hart.  Word of warning:  I’m more political on Twitter.  Feel free to follow me on any and all!!

Hot off the success of her debut EP release, Tiana Kocher ups the ante with a hot new track featuring R&B legend, T-Boz.