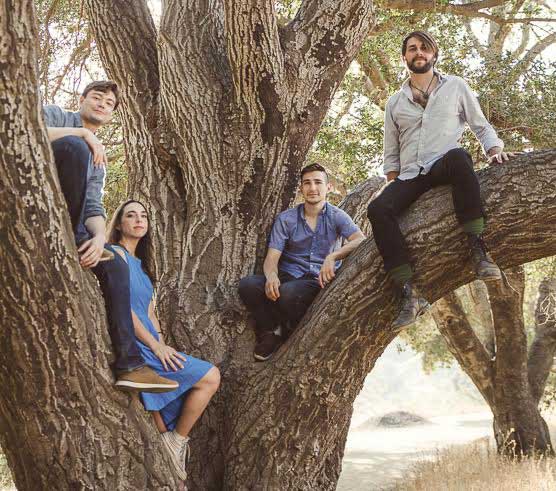 The four-piece, made up of Nate Weiner (Vocals, Guitar), Emily Elkin (Cello, Vocals), Branden Stroup (Bass, Vocals, Guitar) and Jacob Seldes (Drums) have honored traditions of Americana folk, by building the walls of their epic soundscapes, embracing the dynamics and ultimately developing an aesthetic unique to their own.

The band began life as backing Weiner’s solo album, ‘Ride The Sun’ where the group spent time rehearsing and touring up and down the West Coast. After spending hours recording and mixing tracks for this project, with long time friend Stroup and the addition of Elkin’s string arrangements, LA River Bend was born. With the introduction of their now signature three-part harmonies and Seldes on percussion, the new and improved band mastered their authentically rustic, yet beautifully atmospheric sound. Nate explains, “The addition of Seldes to the band is immeasurable, because I think our sound would have been less dimensional without his style of drumming.”

LA River Bend’s upcoming EP entitled Run These Hills was entirely self-recorded by Stroup. Mastered by Grammy award-winning Eric Boulanger (Eric Clapton, Iggy Pop, Green Day), the EP has already received the stamp of approval from industry professionals. Focused thematically on the symbolism of nature based imagery, the tracks on the highly anticipated new music depicts an artfully serene feeling, reaching emotional depths. “The calming influence of nature in LA has been a huge musical inspiration to us”, professes Weiner.

Leading single, ‘Summer Wind’ is the ultimate feel-good love song. Highlighting the band’s approach of exploring the new So Cal ethereal sound, the single emits a sense of ebb and flow, similar to the motion of waves crashing and sweeping against the beach. With stunning three-part harmonies, driving drum beats and catchy Californian melodies, the song builds into a fast paced, toe-tapping anthemic chorus, where you’ll find yourself incapable of keeping still.

‘Mountain’ is the perfect combination of infectious rhythms, complex layers and uncompromising percussive elements. The track features the bands shared love of world rhythms, with it’s building crescendos, sensational string arrangements and the complementing vocals of Weiner, Elkin & Stroup, the song is certain to be stuck in your head all day long. The narrative of the song derived from the band’s struggle to keep pursuing music, despite the myriad of reasons why they shouldn’t.

Whilst ‘Fighting The Night’ is a poignant and emotional narrative of one trying to cope with deep loss. Struggling with the death of his father, Weiner found himself in a state of turbulence, “I was definitely ‘Fighting The Night’, exercising the demons and guilt I felt over my father’s passing.”