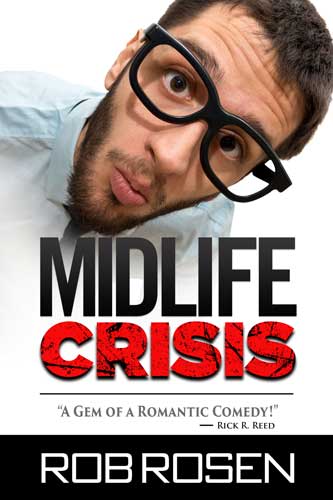 Jack is thirty-five and single once again. He is not, as he as quick to point out, going through a midlife crisis.

Still, it would be nice to have a partner, and so he sets out on an adventure to find the one-time love of his life, Bing, a man he hasn’t seen in more than fifteen years, a man who has seemingly vanished off the face of the planet. With the help of his family and friends, not to mention the family dog and his high school bully, he goes searching for Bing, only to unearth an ages-old mystery that puts them all in grave danger. In this hysterically funny tale, the question remains right on up to the surprise ending: can we return to our past in order to better our future?

Would I read it again – Maybe

Midlife Crisis is that mix of all the things you’re looking for in a pick-me-up book: Mystery, romance, sexy stuff and a good giggle. It certainly picked me up on a God-awful day.

I love a good who-dun-it, so the mystery aspect of this one really worked for me. Sure, parts of it were a little incredulous, but that was the whole fun of it. The book didn’t take itself too seriously, so I as a reader didn’t either. This was more your Miss Marple – someone stumbling into something they, on paper, shouldn’t be stumbling into – rather than your Poirot, where a profession gets sucked into another case.

Jack was a hottie, with money, but a love-loser life. He had everything and nothing – great parents, who were a hoot, a great best friend, a good job/money and a nice home, but he didn’t have love, luck or even the closure of a past love to keep him going. So began his adventure. And, boy, it was a doozie!

I don’t want to give the plot away, but I will say that I loved all the main characters – Jack, his mother!, Monroe, Dave and even Bing. But it was really in the last 10-15% that you really saw their true colors shine through so bright. And that was brilliant too.

Down side? Well, this is an unedited and unformatted ARC, so I had some trouble reading it. There were a few editing issues – nothing that needed to really be taken into account for my rating because I’m sure they’ll be fixed before publication. The formatting was also negligible since I knew going in that it was unformatted. I only mention it, because it was tiring trying to follow the story while there were a few spaces missing, so words blended together. BUT, this is nothing anyone needs to worry about; it’s all the unedited/unformatted part and nothing that will appear in the published version.

So, why is it a 4 and not a 5? I can’t honestly pinpoint it. I had a good giggle and I was surprised by some of the mystery/crime resolutions – which rarely ever happens to me! – but I guess there was just something indefinable missing for me. Possibly that something that would make me read it again? I’m not sure. It feels like the kind of book you’d read and it stays with you, so re-reading isn’t really necessary if you know what I mean?

Overall, though, it was a well plotted, well-written piece of slap-stick comedy, with enough romance, mystery/crime, and slap-and-tickle (sorry, I couldn’t help myself. It felt so appropriate!) to satisfy any reader of the genre.

“He wants us to go on a diet together. I promised to love, honor and cherish. There was no mention of a diet. I would’ve remembered such a thing.”

“Dave might’ve been quick, but no one was quicker than Ma. Ma knew when I was up to no good even before I was awake. Ma had my punishment figured out a week in advance.”

Please visit him at www.therobrosen.com