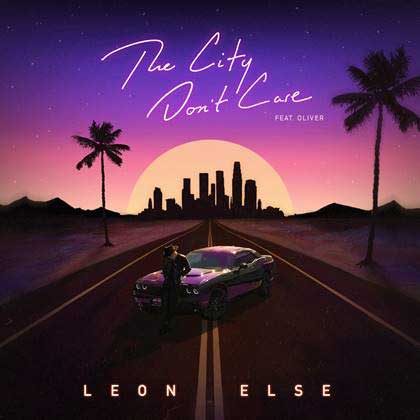 Leon Else, the British singer, songwriter, musician, and the man who Elvis Duran says is “about to be a star” releases his new single, “The City Don’t Care,” featuring Oliver,  on What Are We Doing/Interscope Records via all digital service providers.

The track was written by Else and produced by Oliver (producer-DJ duo U-Tern and Oligee). Oliver remixed Else’s previous single “Dance.”

“I wrote ‘The City Don’t Care’ about my experience in L.A., the land of dreams and opportunity,” says Else, who moved from London to Los Angeles to work on his debut album for Interscope Records. “There is a fine line between dreams and nightmares and I felt like I was experiencing both. So I wanted to do a song that musically felt like I was driving through paradise — the sun setting, the pink skies, the palm trees over the ocean, the city in the distance — but, lyrically, I wanted it to be about the dark side, the lonely side, and the deceiving side of the city; everyday being the same old shit.”

“The City Don’t Care” is the follow-up to Else’s well-received singles “Black Car” and “Dance,” which he released last year. At the end of 2016, he performed his first live show in the U.S. to rave reviews and rapt audiences.

Born in Gibraltar and raised in government-housing projects in the seaside town of Margate, England, Else began writing songs at age 12 and recording them on a cassette player in his bedroom. With the little money he’d saved from work, Else put himself through dance classes with aspirations of auditioning for England’s top performing-arts academies. Within a few years he’d landed supporting roles in films (2009’s Nine), ballet, and musicals, but found himself underwhelmed and decided to quit everything to pursue music. Else’s momentum on the music scene reached new heights after signing with First Access Entertainment. Following a succession of song releases online, the backing of Radio 1’s BBC Introducing system in the UK, and a host of front row invites from the fashion world, Else caught the attention of Interscope Records.

For more on Leon Else: