Jennifer Alvarado is a singer/songwriter from Vale, North Carolina.

Her first EP project titled ”Playing with Fire” was released in April 2021.  She is currently working on a country pop album titled “Songbird” that will be released in Summer 2022.  “Songbird” is a two part collection of songs that shows Jennifer’s growth as a writer and is sonically much different than her earlier projects. Her second single from the “Songbird” project, titled ‘’Rock This Way,” will be released in June 2022. Her music has a country sensibility with a pop current running through it.  Her voice is smooth and passionate with sweetness and power that merge seamlessly into satisfaction for the listener. Her sound is a mixture of country, pop and blues that reflect an eclectic blend of influences. 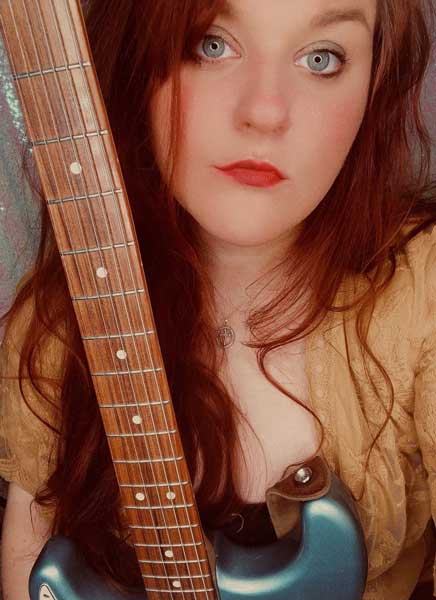 Since I was 9 years old, I have wanted to open or perform with Reba McEntire. I have many people that I would be honored to open for, but Reba will always be my number one.

I know the pandemic and isolation were hard on many. I also dealt with periods of depression and anxiety, however, slowing down helped me articulate some things I was holding on to. I think my writing became more introspective for a season; thus, changing what I was writing about. For the most part, the pandemic was a positive season of growth for me.

I would most likely be working in the ministry. I am still working in the ministry as a Music Minister.  However, before I left the “9-5” world to focus on music full-time, I was working as a Services Navigator for a women’s shelter. I have a heart for the recovery ministry and making sure people have the tools and help they need to beat addiction and get back on their feet.

I think the Internet has made music more accessible. Years ago, you went to the record store and your options depended on what they carried. I used to order special albums from other countries by my favorite artists. Now, you can just go on Spotify or Youtube and find pretty much anything.  I think that’s why you see so much crossover and blending of elements in music because people can listen to pretty much anything they want now.

You have to put blinders on for the most part. Comparison is the thief of creatives and competition breeds resentment. I try to compete only with myself. Everyone has a unique perspective and way of making music.  If you are trying to copy what is relevant or trending, then you will never succeed because it will be outdated by the time you release your song. I try to focus on the story I am trying to tell. If it sounds like someone else, okay.  If it doesn’t, okay.  I think true artists focus on creating what is real and authentic for them.  If you are trying to compete and copy someone else’s creativity, it might work for a short season, but it will never last.

My biggest ambition is to keep growing.  I want to be better at this. I want to keep learning and experiencing new things. Of course, there are hundreds of artists that I look up to and would love a chance to collaborate with or tour with…or even just meet. There are awards that I would love to win. However, at the end of my life, I really want to just look back and know I tried my best, never took people and things for granted, and didn’t let opportunities slip away.

I released my EP “Songbird: Part One” on July 24th.  It contains six original songs and is part one of a two part story about a narcissistically toxic experience I went through several years ago.  Part one focuses on the start of the relationship and then the breakdown of said relationship. Part two focuses on the aftermath and finding myself again.

Honestly, my first thought is “don’t.” This has to be your own journey.  It is what gives you your unique perspective. Keep going even when things are hard because honestly, nothing worth having comes easily. Also, keep a humble attitude.  We all have things to learn, no matter how much we think we know. So listen to others. I’ve learned something from every single person I’ve ever met.

Oh yeah. I used to put on two hour concerts when I was younger and didn’t pay my own water bill:) But yes, I write a lot in the shower. I come up with ideas and usually have my phone close by to voice memo lyrics and melodies. Singing wise, I practice my songs a lot…especially if I am about to go into the studio. I also practice worship songs for Sunday.  It’s the one place where I slow down and really think about the lyrics.

Cornflower blue. It’s a little bit darker than sky blue. It was our wedding color and is my favorite.

I have a tabby cat that my Dad gave me. I’ve had it since I was maybe two. If you quickly walk by, it actually looks like a real cat. It freaks my cat Izzy out most days.

No…however, I was terrified of the Grinch. My parents used to ring the doorbell when I wouldn’t go to sleep at night and tell me the Grinch was at the door. I was terrified.  I also had a picture of bunnies in my bedroom hanging above my bed.  There were four bunnies in the picture (I think). Anyway, at night my parents would ask me how many bunnies were in the picture and I would say “four.” And they would come back and say “there used to be five.” I would freak out thinking one was missing and hopping around my room.  Side note, I’m still terrified of rabbits.

Funny enough, I actually wrote a blog article to myself a year or so ago where I answered just that.  Here’s a link to that article: https://www.jenniferalvarado.com/post/dear-younger-me

My biggest piece of advice: There is a light in you that comes out when you are talking about or working on your passion. It’s different than anything else you exude. Don’t let that light dim. Others will see that light, so guard it. Some will try to use it. Some will try to hide it away, so it doesn’t shine brighter than theirs. While others will try to extinguish it completely. Many times it is because someone extinguished theirs before they even had a shot at using it. Hold onto that light with everything you got because it is your gift to the world.

Songbird: Part One is the first of a two-part project that illustrates the journey of enduring and healing from a toxic situation.  The EP contains Alvarado’s hit song, “Curious” as well as her latest single, “Rock This Way,” which was released in June.

Produced by Ricky Rodriguez of Bombhouse Recordings in Morganton, NC, the music captures Alvarado’s growth as a writer and is sonically much different than her earlier projects.

“For me, this project was about healing and finally finding my unique sound and approach to creating music,” says Alvarado.

She has been recognized locally for her songwriting and was named ”One to Watch” by Nashville Songwriters Association in Spring 2021 and 2022.  She was named the “2021 Country Artist of the Year” by Indie Star Radio.  Her song “Curious” won “Best Pop Song” for the Indie Songwriting Awards in Winter 2022.  Her song “Rock This Way” won “Best Pop Song” and “Best Overall Song” for the Indie Songwriting Awards in Spring 2022.  She is currently nominated for five International Singer Songwriter Association Awards, including “Female Vocalist of the Year”, a Josie Award for Female Music Video of the Year for “Filthy Water”, and a Carolina Music Award for Country Female Vocalist of the Year.