Nashville, Tenn. (June 19, 2020) – Multi-Billboard charting artist Cassandra Kubinski releases her take of “Back to Earth” by Jason Mraz enhanced by an artistic lyric video. You can watch the lyric video by clicking here. 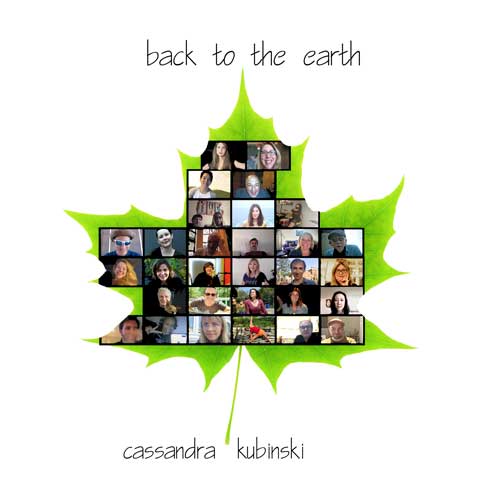 Back to the Earth is the latest single from Billboard charting artist Cassandra Kubinski. A cover of Jason Mraz’s song from his album Yes!, it was conceived and recorded on Earth Day 2020 as an organic, earthy, a capella version focusing on the message of the song, a call to find solace, rebalancing, and healing in nature.

The track is almost 100% a capella, with the lead vocal layered over lush stacks of harmonies that ebb against each other in a flowing foundation, accented only by an egg shaker.

The song features production and additional vocals by Tony Daniels, a frequent collaborator of Kubinski’s, and co-writer/co-producer of her last EP DREAMS.

“Jason Mraz is one of my favorite artists, not just his witty, soulful lyrics and catchy melodies, but his humanness and how he really walks the walk on what he talks about.  His band, Raining Jane, is all-female,” explains Cassandra. “He shows up to play and support causes from pet rescue to arts education to race equality. He is an avocado farmer when not creating music and touring. That type of “living the message” inspires me to consider what steps I can take, and my fans can take, to live more harmoniously with the earth and each other.”

Kubinski previously experienced worldwide success with Not So Different, an Autism anthem written at the request of a friend with two sons on the spectrum. Not So Different became a crowdfunded music video featuring Real Housewives of NJ housewife Jac Laurita, NY1 anchor Cheryl Wills, and other NYC local celebs, which has gained over 100,000 views on Youtube. Kubinski subsequently re-recorded and released the song with the Goo Goo Dolls and Mary Ramsey of 10,000 Maniacs, with sales supporting the Institute for Autism Research at Canisius College. The launch concert for the song raised $30,000 for the Institute in Buffalo, NY.