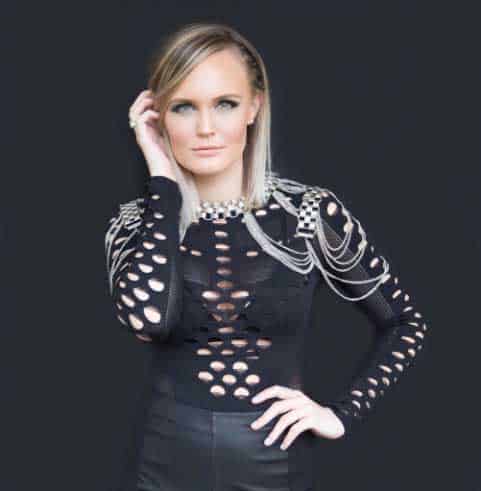 Up and coming Nashville-based pop star Brit Daniels is proud to debut the music video for her single, “Shadows,” which premiered Wednesday on Yahoo Music.

“Shadows” was inspired by the idea of missing someone and there always being this dark feeling that takes over when old memories arise. The dark pop elements are illustrated in the dimly-lit, smoky setting of this video.

“‘Shadows’ talks about the feelings you experience when you’re missing someone. Wherever you go and whatever you do, the memories of that person come flooding back almost as if it’s haunting you in a way. I feel like this is something everyone goes through when they experience loss in any form, which is what led me to start writing ‘Shadows.'” – Brit Daniels

The song itself was inspired by Daniels’ friend’s painful breakup as well as her own experience losing her father during her freshman year in college.

“Between what I had experienced in the past, and at the time what one of my best friends was experiencing, the lyrics and development of the idea just came flowing to me so easily. I feel like this song is so relatable in the truest form because everyone has experienced the feeling of missing someone in some way or form.” – Brit Daniels

Brit Daniels intertwines energetic pop with vibrant elements of rock and EDM to create a sound that completely encompasses everything about her. Born and raised just outside of Dallas, TX, her talent was solidified at the ripe old age of two when her mother caught her belting out Twinkle Twinkle Little Star in their backyard. Daniels really began honing her craft and truly understanding herself as an artist when she began recording in local studios, performing in various talent shows and competitions and singing the National Anthem for several Texas Rangers baseball games. Daniels picked up her life after completing a degree in Radio, Television, and Film from the University of North Texas and an internship in radio to move her journey to Nashville to begin working at a well-known label and management company in order to learn how the business aspect of music works.

Music has always been the constant in Daniels’ life. From her mother putting headphones on her belly while pregnant with Daniels to her first instrument given to her by her father, she knew becoming a musician was her fate. However, when Daniels was a freshman in college, the unexpected happened, and her father passed away due to injuries sustained from a car accident while he was on duty as a police officer. Through this experience, Daniels started refining who she was an artist and the stories she wanted to tell. Her first single, “Eulogy” shows that troubles you face can break you, but it’s up to you to move on, find the good, and see that you might be better off in life because of them. In her father’s death, Daniels found her strength and her passion ignited. Thriving on an outgoing and bubbly personality, she’s not afraid to dig deep and delve into anything that life throws her way.

“You start doing so much to fit in and be popular that suddenly standing out becomes the challenge. Don’t be afraid to be yourself, trust in what you love and focus on that.”