"Just a Thought" Throws You Into a Vortex of Inspiration"

The 5 track EP, entitled “Just A Thought”, features his first 3 singles (previously released), as well as 2 new songs – “When I’m With You” & the stand-out title track, “Just A Thought” co-written with Billy Dawson and Producer, Noah Henson.  The EP is actually set in chronological order of writing and recording,  Lenny started this project in 2016 and the evolution of writing and vocal growth is extraordinary. When Lenny started working on the EP, he was trying to fit into the “standards” of Nashville and what was expected of an up and coming artist.  He says he was working to fit in rather than stand out. Lenny has evolved over the past two years and he is writing and producing music that is authentic to his vision. Link to Download and Streaming Sites.

“Just A Thought” is not just good it is exceptional in every way. Lenny’s rich vocals are absolutely flawless and the moving lyrical composition brings an unexpected inspirational message. The second new song to release on the EP “When I’m With You” is a fun ride-along love song that celebrates the good feelings and great times of being with someone very special. Both of these new songs will thrill Lenny’s fans and his new audiences will be hooked! Lenny does not disappoint with his delivery of incredible music and effortless talent.

Lenny is an inspirational young man and his gratitude for the opportunity to create his music is his gift of life. Ten years ago at the age of 15,  Lenny suffered a catastrophic accident while snowboarding.  The accident left him paralyzed from the chest down. With sheer determination and intensive rehab for 9 months, Lenny was back on his feet, and moving forward without looking back. “I think what I’ve been through as a recovered quadriplegic and the positive outlook I’ve kept through it can help people anywhere, going through any hardship. I’ve never been afraid of a crowd, I love getting in front of people and making them feel good by either talking and sharing stories or playing music. Above all that though, I just love people and am grateful that what I get to do relies on the mutual love of people listening to my music. – Lenny Martelli

Lenny has an extensive resume for his short time in the country music industry. He has opened for Dierks Bentley, Jon Pardi, Chris Young, Chase Rice, Lindsey Ell, Neal McCoy, The Swon Brothers and more.  He is currently performing and touring in the Northeast Region and will be heading back to Nashville to continue writing and recording his upcoming EP.

“The greater Philadelphia area has produced countless musicians that have gone on to become huge success stories.  The list goes on forever, but includes Hall & Oates, Jim Croce and Chubby Checker.  It isn’t necessarily thought of as a hot bed for country music, but don’t be fooled.  There are people in that part of the country that not only love the genre, but there are artists creating music in it as well. I met one of those people this week.His name is Lenny Martelli and if you’re willing to hang out with me for a few, I think you’re not only going to become a fan of his, but you’ll probably even feel better about your day in general.  His story is all about tenacity.” – Patti McClintic (Journalist) 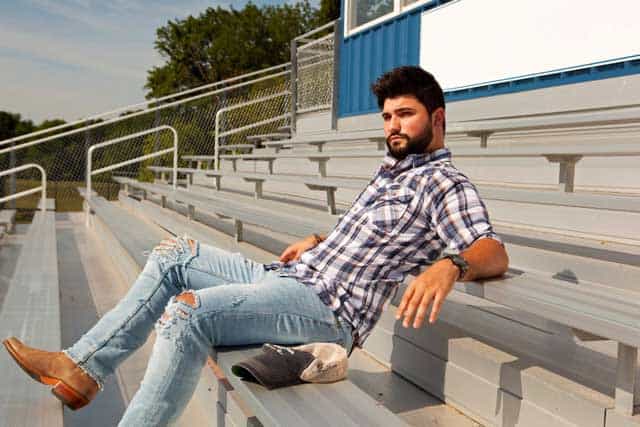 Lenny Martelli, born and raised outside Philadelphia in Norristown, PA, is a multi-instrumentalist, singer, and songwriter. At the age of 5, Martelli started playing drums and football, learning discipline and work ethic are needed to achieve the best results. The competitive nature grew with him and the challenge to push himself in sports coincided with the challenge to learn more instruments which led to piano, guitar, and much more. To Lenny, music and football were synonymous when it came to working hard to perfect his crafts and reach the dream of playing in front of a crowd one way or another.

However, in 2010, football wouldn’t be an option anymore. At just 15, Martelli suffered a spinal cord injury after breaking his neck during a snowboarding trip. The accident would leave him paralyzed from the chest down with the prognosis of never being able to walk again. The aforementioned discipline and work ethic, along with immense support from family and friends, and unwavering faith in God and himself to do whatever it took to recover, would serve to be the core elements in helping Martelli beat the odds. After intense, around-the-clock physical therapy treatments, Martelli was back on his feet just 3 months later, spending an additional 6 months in rehab to learn how to walk again.

At this point, Martelli knew he had to put all of his energy in his music, in addition to his physical health. During the accident, Martelli punctured a lung and was still recovering from the effects the paralysis had on his diaphragm, making simply talking exhausting. Teaching himself how to sing again, Martelli started to focus more on songwriting, spending the next 5 years performing with various bands around Philadelphia and the northeast. Wanting to take things to the next level, he recorded a demo to start building his catalog. Lenny released that demo in 2015, which would be his first single as a solo artist. The song “Little Do You Know” would go on to gain over 1 million streams across digital platforms, catching the attention of Nashville producer, Noah Henson. Henson, also known as the guitarist for christian-rock band Pillar and country music superstar Brantley Gilbert, produced the #1 debut EP “Closer” by Kane Brown. After spending the past 3 years writing and recording in Nashville, Lenny’s debut EP is now available! The 5 track record, entitled “Just A Thought”, features his first 3 singles, as well as 2 new songs – “When I’m With You” & the stand-out title track, “Just A Thought” – providing a roller coaster of a listening experience.. With a brand new release, Lenny continues to pound the pavement, playing as many live shows as possible and is excited for the direction his music is heading… Lenny shares, “The past few years have been a very thorough development process as both an artist and songwriter – taking what I’ve learned along the way, I’m excited to go into 2020 and continue to prove that anything is possible!”- Lenny Martelli

Switching To A Career That Helps Others

Switching To A Career That Helps Others

3 Tips to Handle a Difficult Divorce in 2021

3 Tips to Handle a Difficult Divorce in 2021

If you don’t properly deal with the divorce stress and negative emotions, the consequences can begin to slowly affect you...

How To Choose Your First Running Shoes

​How to get a non-invasive facelift at home

All You Need to Know About Sleep Loss

How Do Technology and Healthy Sleep Co-exist?

How to Get Your Body Ready for the Summer?

7 Nightly Habits for Better Sleep and a More Productive Tomorrow

Why Lacrosse Players Should Try Yoga