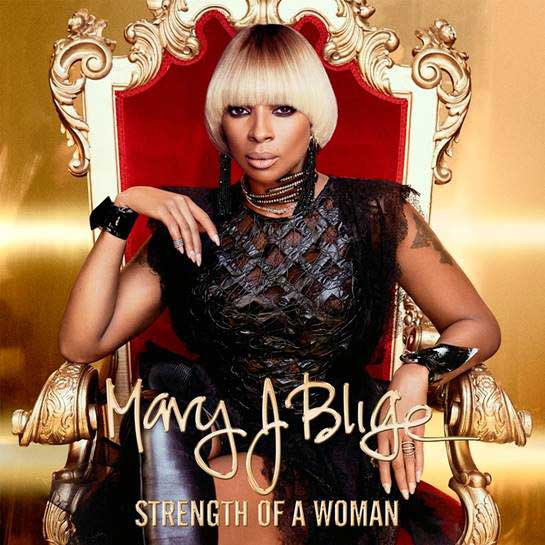 The album’s latest single, “Love Yourself,” features vocals from Kanye West as well as production by DJ Camper.  The single once again proves Blige to be at the top of her game, displaying the songstress’ signature R&B sound while delivering yet another powerful and soulful vocal performance.  Preview to the track here.

“Love Yourself” follows the successful tracks “U + Me (Love Lesson)” and “Thick of it.” The latter marks a career milestone for Blige.  Co-written by MJB along with Jazmine Sullivan, the song spent 16 weeks at #1 on the Urban AC Chart, marking her longest running #1 single on that chart. What’s more, “Thick Of It” climbed to #1 faster than any other song since 1995, when Whitney Houston’s “Exhale (Shoop Shoop)” reached No. 1 in its second week. Only three songs have ever reached No. 1 in 4 weeks or less (including “Exhale”). “U + ME (Love Lesson)” is currently #6 on the Urban AC Chart.

Strength Of A Woman Tracklisting:

Mary J. Blige is an iconic singer, songwriter, actress and philanthropist.  She has sold over 50 million albums and 25 million singles worldwide, garnered nine GRAMMY® Awards (plus a staggering 32 nominations), a Gold Globe nomination and five American Music Awards.  She holds the distinction of being the only artist to have won GRAMMYs® in the R&B, hip-hop, pop, and gospel categories. She is amongst a handful of entertainers to release eight or more multiplatinum albums, with Billboard naming her “the most successful female R&B artist of the past 25 years”.

Mary J. Blige on the web: