When fresh-faced teen, Lyssa Heyman, burst onto the scene in 2021 with her unique music style; she has been lighting a fire and set a tone amongst listeners and fellow artists alike. Now, one year later, she’s gaining a reputation for creating quirky, yet honest songs that examine life’s complexities. Her music style can be described as alternative/indie pop. Lyssa’s songs originate from a singer-songwriter perspective, sensibly packaged within an edgy jacket and with strong melodic emphasis.

This South African-based 15-year-old has been playing guitar for the past seven years and added singing to the mix about four years ago. She released her first single, Moon Girl, in 2021. Her pure voice mixed with the simple yet captivating production and thoughtful lyrics – written by herself – resulted in a well-received track. It landed her an invitation to perform on a national South African television show in October 2021. Moon Girl exceeded expectations and was playlisted on several radio stations across South Africa and charted at #15 on The South African Top 40.

Everything that’s created is candid and real as she wants her music to promote happiness and kindness. In Lyssa’s words: “I honestly create music for the fun of it. I love the creative aspect and I find it very relaxing. I want my listeners to feel loved and heard. I think my main aspiration is to make music while spreading a message of love and positivity.” For Lyssa, this is truly the beginning of a long and successful career. She has been working on new material and much growth can be expected from her new release titled Mirror. It’s refreshing to see up-and-coming young women artists with fresh styles and alternative perspectives, ready to make their own rules. Lyssa Heyman is definitely a young artist to keep an eye on. 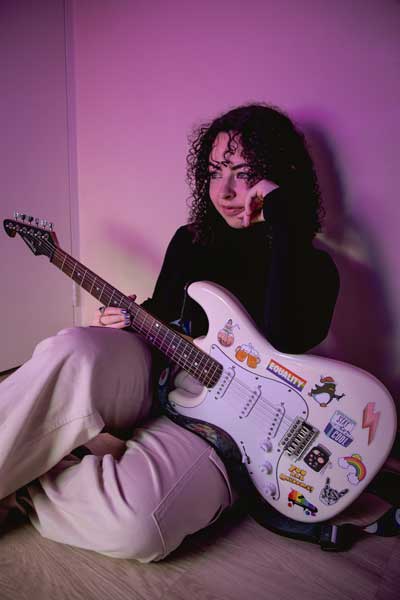 I think my guitar teacher. Although I made music of my own before that, he was the one who really pushed me to put my music out there. Before I was super wary about it, but he definitely was the one who saw potential.

Normally I’m sitting on the floor (the best place for me), with my guitar in my hand. As long as the creative juices are flowing I have the best time thinking of melodies and concepts.

One direction definitely, even if they’re not a band anymore.

Be kind to others, be kind to yourself.

I am still a student with a relatively long amount of high school left, so I guess I would be studying maths or something.

I’ve only had one proper performance on The Expresso Show (South African based tv-show), so if I had to pick a song from there, I would say ‘When the ice breaks.”

I love Briston Maroney! You can tell that he loves what he does so much.

The expectations of it. Sometimes we should be able to do what we want in our hearts without0 having to feel judged by it.

I do have a favorite, there’s one that I haven’t released quite yet, but I think that it’s my favorite because it shows how much I’ve evolved compared to when I was 12. Or at least I think so.

There’s going to be a lyric video as well as an acoustic cover coming out in the future!

Stranger Things! (patiently waiting for the rest of the season to be released.)

Our school had an Oscars event which was really fun. I wore a black dress with pearls.

Probably a pair of converse. I have a bit of an addiction to Converse if I’m being totally honest.

I would love to learn French fluently. It sounds insane!

I’ve been wearing one specific crystal necklace every day for a long time, and I’m convinced that if I don’t wear it it’s bad luck. Does that count?

Do you shout out the answers at the TV whilst watching quiz shows?

I totally do, who doesn’t, to be honest?

Lyssa returns with a new release titled Mirror. The song is influenced by real-life relationships. Especially the experiences of how people portray themselves and that self-worth should not be judged by the exterior.

This new release contains characteristics that are reminiscent of 90’s female rock icons like Sheryl Crow
and Alanis Morrisette, but with a modern flair of current artists like Phoebe Bridgers. Mirror is fundamentally guitar driven and has a prominent melodic bass line. It starts out with a downtempo beat, yet quickly transitions into a lively chorus that makes you feel like you want to go for a drive on a long open road.