“I definitely wouldn’t say it’s music writing,” says 20 year-old singer/songwriter Julia Bhatt coolly.  “I genuinely just fuck around on the guitar until I play a string of chords that makes me feel good, I guess.”

Already a buzzing artist in the indie/alt-pop underground, Julia has been getting praise from such indie tomes as Earmilk who says she “is quickly finding herself in the conversation of alt-pop’s surging artists, a genre that continues to dominate playlists. Bhatt’s edge is in her rhythmic tracks, which are dance-inducing, borrowing for sure from the dance-crazed culture of her hometown of Miami—a wonderful tinge.” SKOPE Magazine points out her “slinky lounge-esque r&b groove that makes Julia’s sultry, flowy vocals shine bright, leading into a sense of urgency.” These are just two voices in a sea of adoring media fans.  Less than  three years releasing music publically, Julia has already been turning heads.

Born in Boston, MA but living practically the whole of her young life in Miami, FL, Julia was raised on a stimulating and expansive musical diet – her first musical memory is of being overwhelmed to tears at a Shakira concert in 2006 when she was a wee 4 years old. She grew up listening to everything from classic rock, American songbook standards and bossa nova beats.

“I definitely owe a lot of my music taste to my family,” she explains. “I grew up with my parents’ love of 60s/70s music, with my mom specializing in more of the classic rock side, whereas my dad showed me the smooth yacht rock side of the 70s. As I got older, my sister really influenced my music taste, because I’d just listen to whatever she did. (Luckily she has good taste). As for lately, I have Spotify to thank for all my weird discoveries.”

Infused with the broad array of influences from the music with which she grew up, Julia has an ear for unique sound and style.  With a powerful voice reminiscent of Amy Winehouse and Macy Gray, Julia writes engaging, fun hooks with great beats, juxtaposed with honest storytelling that reflects observations about life in the melting pot of Miami, as well as reflections on her ongoing struggles with depression.  Her rich, soulful, playful voice also delivers new energy and impact to the classics that she covers. 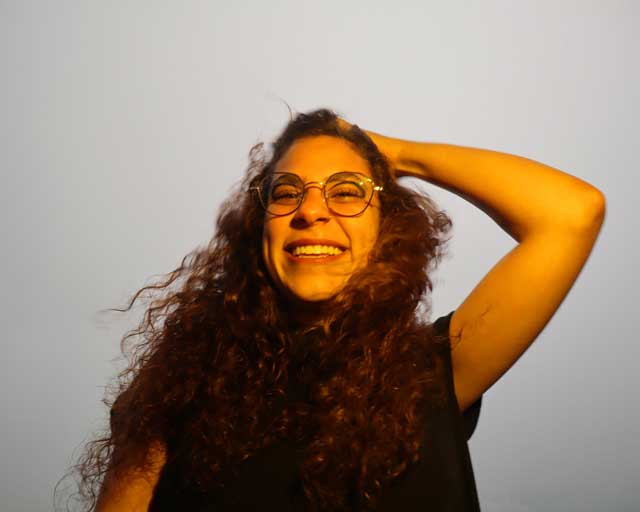 Probably either “Marco,” “Karma,” or “Hair Salon Vibes“. I don’t usually listen to my own stuff, so it’s a bit difficult. Those are the 3 main songs I feel like singing along to, not because I know the song, but because it makes me feel like singing. That means a lot to me.

Thinking about releasing a nice cover album! I love doing other artists’ music. Other music is what makes me want to sing, rather than just feeling inspired to sing and write shit. I think it’d be a good way to fall back in love with recording music.

I have a Focusrite Scarlett Home Studio interface and a 2013 mac computer. I also have a mic stand that doesn’t work very well with a mic screen duct taped to the stand. It is all balanced on some boxes I have yet to find places for. It’s very professional.

Was anyone else involved in writing, recording, or producing the songs?
Elliot Jacobson [mentor/producer who’s worked with Ingrid Michaelson, Elle King, Vérité]!!! I try to mention him any chance I get because he’s such a huge part of the process. He wrote the base of some of the songs on the album. He helped me create every single track. He sourced and orchestrated the musicians who played on the album. He produced the WHOLE THING! I never wanted to do music alone, and with him, it doesn’t feel like I am so alone.

Literally everybody. Oh god, I just wanna play with other people and not have to have everything come from my head. I love so many musicians, and I get all my inspiration from other people. Some ones I always mention are the Strokes/Julian Casablancas and Glass Animals, but some fresher ones are maybe Coldplay, Jungle, BTS (as if), Childish Gambino, ETC. literally. everyone.

Well, if it’s a new addition does that mean it needs to be a brand new color ??? If that’s the case, maybe I’d be like a sealing/finishing crayon. Something to smooth over all your drawings. If that’s possible.

Do you shout out the answers at the TV whilst watching quiz shows?

Yes, but it’s more so that I talk about everything during any type of show. I have lots of questions. Most people are not fans of this behavior.