He received support from the likes of John Kennedy (Radio X), Spotify, Apple Music, BBC Introducing London, Amazing Radio, Wonderland Magazine, Clash Magazine, TMRW Magazine, Complex UK, EARMILK, DHP Family and tipped by The Line Of Best Fit as “A distinct musical identity whose brand of thoughtful meticulously turned-out indie-pop continues to prick ears and turn heads across the industry”. In October 2019, Alessandro sold out his debut headline show at The Waiting Room (London). Ciminata is now set to release a new series of singles in 2022, with a new EP on the horizon. He has grown an audience of over 19k followers on TikTok. His debut EP ‘Over and Over’ amassed over 145k streams on Spotify. His latest single ‘A Little Bit of You’ went viral on TikTok with over 44k UGC videos created and over 20 million views on the sound. 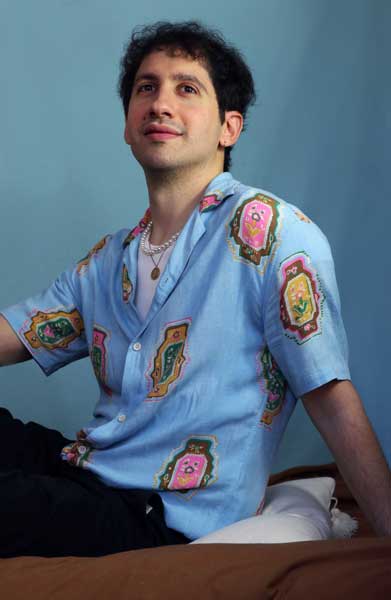 I call it nostalgic retro-tinged indie-pop. Even when I write happy songs there’s always a nostalgic touch somehow lol

It changes and adapts depending on the situation. What I do the most though, is find a nice chord progression either on my guitar or midi keyboard, then start singing random melodies over it until I find that one melody that strikes me. From there, I develop the melody further, add some lyrics and give the song a structure. I also enjoy writing from titles, it gives the song  a complete perspective when you start writing it…it’s like you are visualizing it already.

I think the pandemic fucked me up. I initially thought it did some good to me but it actually didn’t. I became way too lazy than I used to be. This is reflected in my writing as well. Luckily, I think I’ve found my way out…

Life is a mess but it could be beautiful…so, never give up! Work hard to make things change, you are the only one in charge of your life, be yourself, and make your weaknesses become strengths.

I can reproduce the sound of drums (well, not quite the same) by hitting my tongue to the back of my teeth.

No, but I do swear a lot when there’s no hot water coming through

I’ve got Marcel (a little stuffed monkey) and Paul the Alien. Why Marcel? When I first started my journey on TikTok people were saying I looked like Ross from Friends…he had a monkey called Marcel…so…..

I’ll Wear Your Sadness Like It’s Mine (rel 01.07.22) is the 2nd single of 2022 from Alessandro Ciminata, a London-based singer-songwriter creating what he defines as romantic indie-pop.