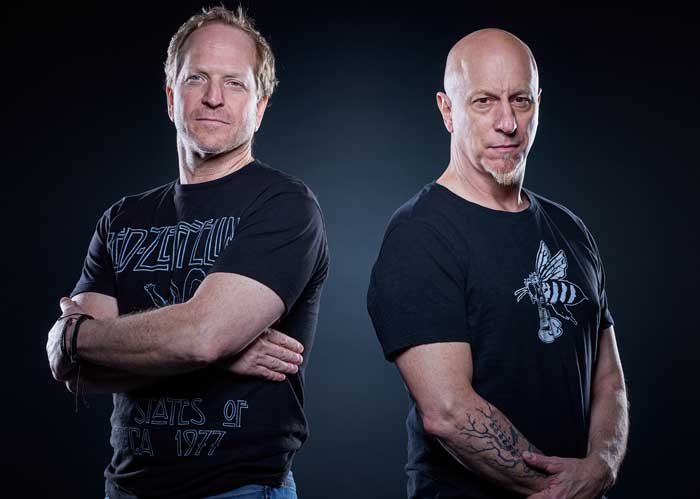 The Simple Radicals are a retro rock band from the great blues and rock city of Chicago, Illinois, featuring John Malkin on Lead Vocals and Rhythm Guitar and John Griffin on Lead Guitar and Vocals. Together, they capture the passion and energy of their collective musical experience, with different tastes, sounds, and styles. The music they create is pure, visceral rock ‘n’ roll – poignant, from the heart, topical and direct.

Hell yes. Better reverb in there than any studio.

The baddie for sure. They get all the good lines and are the most remembered. Just ask Arnold in The Terminator”…I’ll be back.

Classic rock songs. Whenever I hear one I can always remember where I was listening to them growing up. Timeless music.

Both. And still am.

We’re a retro-rock and roll band that combines sounds and styles from some of our favorite classic rock bands like Pink Floyd, Pearl Jam, Foo Fighters, Green Day and Cheap Trick. If you like those bands then I think you will like our sound. I grew up listening to classic rock and still listen to it to this day. It’s timeless and some of the best music ever written. I wanted to form a band that maintained the integrity of the classic rock sound while adding retro flavors.

I see a lot of images and moods when I write. Certain chord progressions, finger pickings and riffs often direct me on how the song is constructed and then the lyrics start to flow. It’s a bizarre process but it works for me. I actually write a lot of my songs on an acoustic guitar. Even riffs such as the songs “New Revolution”and “Medicate” I feel that if it sounds good on an acoustic then it’s going to sound even better when plugged in.

Eddie Vedder. Probably one of the best songwriters in the last 30 years.

We’ve actually been quite busy. We’re currently recording some new material. We continue to push our album, “New Revolution” which has the guitar-God Vernon Reid from the band Living Colour playing lead on the track “Medicate”.

We released a song and video called “Rich Man Wanna Be King” which provides a scathing lampoon of ex- President Trump. It’s already racked up 190,000 views and climbing.

Jefferson Airplane’s “White Rabbit” is probably one of the most iconic and recognizable songs in rock. John Malkin and John Griffin of the Chicago-based rock band The Simple Radicals used to cover that song in a band they played in several years ago and it always brought the house down. They always wanted to do their own version.  And they have.

They’ve collaborated with husband/wife duo Che-Val on a psychedelic pop version of “White Rabbit” that will certainly bring the house down for old and new fans of this classic song. The song will officially be released worldwide at midnight on March 5th but fans of the band and the song can be the first to hear it by pre-saving the song on Spotify and/or Apple Music through the link https://thesimpleradicals.fanlink.to/whiterabbit.

Produced by Kenny Cash at Factory Underground Studio in Norwalk, Connecticut and mixed by multi-platinum/gold award winning producer Earl Cohen (Tina Turner, Nelly, Usher, Lady Gaga), the song is intoxicating and ethereal and fans of classic rock, as well as artists like BANKS, Massive Attack and Shaed, will love it.

And, we have a podcast show called “Music & A Brew” where we crack open a cold one with musical artists. Our first show was with world-class drummer Kenny Aronoff. Our next show is with Todd Sucherman, the drummer for the band Styx.

We formed the band in 2019 and immediately played a festival in Chicago. Then we played the iconic Cutting Room in New York City where the likes of John Mayer, David Bowie and Sting also played. We had a kick-ass 2020 planned including two showcases at SXSW in Austin, Texas, playing festivals with Molly Hatchet, Jefferson Starship, Puddle of Mudd, and Blackfoot as well as a tour starting in Chicago. But all got axed due to Covid. But we’re on the docket to play those in 2021 if the apocalypse ends in time.

We’re a retro-rock and roll band that combines sounds and styles from some of our favorite classic rock bands like Pink Floyd, Pearl Jam, Foo Fighters, Green Day and Cheap Trick. If you like those bands then I think you will like our sound. I grew up listening to classic rock and still listen to it to this day. It’s timeless and some of the best music ever written. I wanted to form a band that maintained the integrity of the classic rock sound while adding retro flavors.

Eddie Vedder is my musical hero. I’m mesmerized by his writing and try to capture the messaging, passion and energy that he does in his songs. If I can even come within a million miles of that I’d consider it a success. Other bands that have influenced us include Foo Fighters, Cheap Trick, Pink Floyd, Green Day, and Tom Petty. If you like the sounds of those bands then I think you’ll like our band and sound.

I just love everything about the creative process. From the germ of the idea to taking the idea to the guitar, constructing the song, writing the lyrics, and then ultimately turning it into a composition with your fellow bandmates. It’s so challenging but so rewarding. Honestly, I haven’t found one thing I don’t like about being a musician. I even love the rigors of touring.

Like Loading...
Previous articleHow to Run a Business Without Sacrificing Your Love Life
Next articleBrighten Up Your Home With These Spring Lighting Ideas