Getting to know Alien Feelings 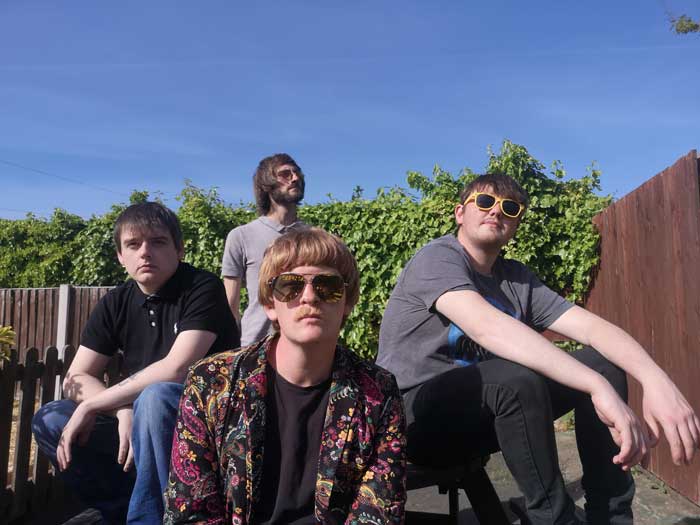 Alien Feelings come from Wrexham in the industrial borders of North Wales armed with choruses that prove there’s only one thing better than a singalong: a shoutalong.

Loud and aggressive, theirs is the anguished howl of the backwaters where there’s little else to do but play punk rock and get stoned. Tim, Dale, Josh and Ryan knew each other in school where they spent most of their time discussing Slayer, Reel Big Fish, Red Hot Chilli Peppers, The Beatles, The Jesus and Mary Chain, Nirvana, Green Day, Pink Floyd and The Who at the expense of an education.

Ryan: My mum had a gorilla teddy that used to scare the shit out of me.

Dale: Yeah we’ve won pub quizzes in the past, easy
Tim: I think the ever-changing quiz team names got a few laughs like.
Josh: In fact, if the music doesn’t work out, you’ll see us on Egg heads!

Josh: I have a deep love for Alice in Wonderland, I’ve just always been in awe of its philosophies.

If you could be a superhero, what would your superpower be and what your superhero name?

Dale: Super Dale. My superhero power would be obtaining chocolate through mind power.

Ryan: Who knows haven’t thought about it.

Dale: Actually my power is gonna be the ability to cure people’s hangovers.

Dale: Tom and jerry la, all the time. If it comes on the TV I have to watch it. I don’t go out of my
way to find it. But if it’s on, I’m watching it. Makes me feel like a kid again. Mint.

Josh: Yes, it always starts with putting the kettle on, getting my notepad out and having a smoke.

Josh: It’s certainly evolved, I feel we pack a lot more punch than we initially intended. It’s just natural
growth and progression as we’ve built on the band’s chemistry.

Dale: The monitors are a mixture of JBL104 and Mackie CR7. The interface we’ll be using soon is the
Focusrite Scarlett 18I20. Various microphones and Logic Pro X and also our ears.

How do you advertise your music?

Josh: The same way as everyone else these days, social media is the only platform available to us at this
time, so we’re doing our best to utilize it.

Does your music fit into your local scene? If so, how do you take advantage of
that? If not, do you see that as an obstacle and what do you do about it?

Josh: Sadly not. We’ve not had much support from our home town in all honesty, but that’s just the way it
is. We’ve not let it become an obstacle we’ve been really lucky to have had the opportunity to play in a few cities outside of Wrexham. Our followings growing with or without our town’s support, so it
doesn’t really bother us.

Alien Feelings’ debut EP “Bondage and lipstick” is out now and available on all major streaming platforms! Be sure to give it a listen and spread the word!