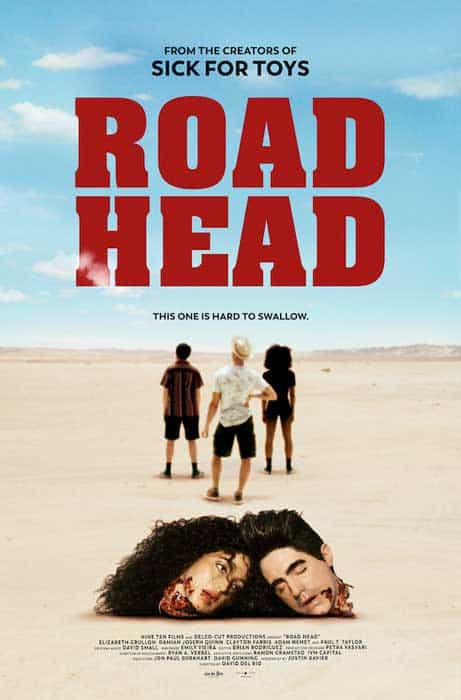 More than 105,000 attendees will experience the work of internationally renowned and emerging artists and technologists this year at Cinequest Film & VR Festival. Representing a spectrum of genres, genders, ethnicities, orientations, and viewpoints, this year’s lineup is not to be missed – including the queer-themed horror stoner comedy, Road Head from the producers of the acclaimed Sick For Toys.

Road Head’s world premiere will take place on March 7th, with screenings to follow on March 8th, 13th, and the 15th.

A Nine Ten Films and Delco-Cut co-production, Road Head tells the story of three friends who take a road trip to the Mojave-desert where their complicated relationships are pushed to their breaking point as the group encounters a reclusive, murderous cult.

“I’m honored to be included in such a highly respected film festival that will help bring widespread exposure to our film, and leave our audience with an amazing experience,” says David Gunning, co-producer of Road Head.

“I am beyond thrilled to showcase our film at Cinequest! The combination of creativity and innovation makes for an exciting event; experiencing new technologies that go beyond film. I hope the audience is surprised by Road Head! Not in what the film reveals as the “twist;” but working with audience expectations of what this film is based on, the ridiculousness of the concept, starting with even the playful title “Road Head”. I hope the audience feels surprised by how much more they will see in the film,” comments filmmaker David Del Rio.

“Cinequest has been on our radar since our first short film in 2012.  We are thrilled to debut our feature film ROAD HEAD at Cinequest 2020; and we hope audiences have a blast watching this ridiculous, poignant and genre bending film!” adds co-producer Jon Paul Burkhart

The Cinequest Film Festival is an annual independent film festival held each March in San Jose, California and Redwood City, California. The international festival combines the cinematic arts with Silicon Valley’s innovation. In 2019, the festival was renamed the Cinequest Film & Creativity Festival in recognition of the many creative experiences presented each year including film, virtual and augmented realities, comedy, television, fashion, art and design, dance, and more.

For more information about Road Head go to www.ninetenfilms.com

David Del Rio is an Hispanic-American Actor, Director, and Producer. David has appeared and developed several well-known film, television and theatre productions. Starring in Fox’s Grease Live!, Universal Studios Pitch Perfect, Blumhouse’s The Belko Experiment, Disney’s Geek Charming and on Broadway in In The Heights to name just a few. He’s Co-Founder of production company Theatre Row Productions along with his producing partner and wife, Katherine Del Rio. His demo-reel company, The Reel You, continues to help actors nab high quality footage to showcase their talent. You can see David this April on ABC’s The Baker and the Beauty.

In 2012, Nine Ten Films opened shop and began production on its first film, Stigma. Stigma screened at festivals all over the world, winning multiple awards. Nine Ten Film’s sophomore effort, A 2nd Opinion, screened in Cannes (a co-production with Delco-Cut Productions). In 2014, Nine Ten Films traveled to Madrid, Spain with the horror film Henry Toy. Henry Toy went on to win the best supporting actor trophy and be nominated for best film of the Madrid International Film Festival. Sick for Toys became Nine Ten Films’ first feature film and is available for purchase in more than a dozen countries. Since its inception, Nine Ten Films has produced films in various genres.  www.ninetenfilms.com

How to Easily Develop a Fitness Habit