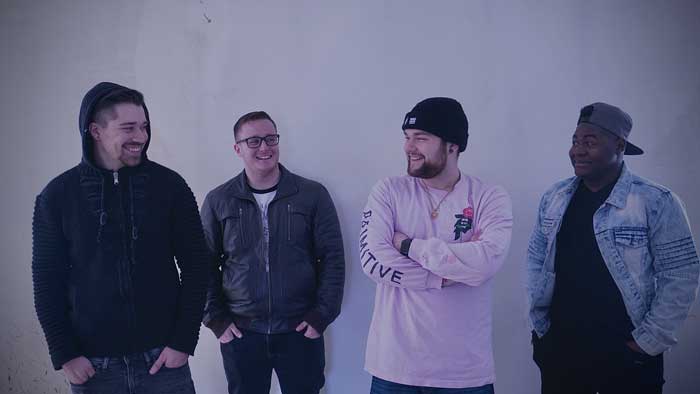 NY, USA | APRIL 17TH, 2020 – NY-based alternative rock band Brookline have released their new EP, “Where Do I Go From Here,” available on all digital music platforms now. Ushered in by the lead single “Dive In,” the EP is the band’s last body of work for the foreseeable future, as member Mikey Pace prepares for deployment in the United States Army. Although a turning point in their career, “Where Do I Go From Here” delivers a cohesive blend of alternative rock and post-hardcore, creating their strongest and most distinct collection to date. Coming together to release one more wave of new content, Brookline’s sound is more polished than ever, and highlights their continuous evolution.

About the EP, the band states:
This EP is deeply personal. It may be the last thing Brookline ever does. With Mikey being deployed and Chris and Tommy both engaged to be married the future of our group has never been more unclear, however we are incredibly grateful we were able to pull together for one final release before life takes us all in different directions.

Brookline is a four piece alternative rock band hailing from Upstate New York. The group consists of Mikey Pace and Dae Bennett on guitars, Chris Fox on drums, with vocals from Tommy Carter. With a genre blending sound consisting of pop punk, emo, post hardcore, and 90s alternative rock, Brookline was formed in early 2018, and after some lineup changes and musical evolution, the Albany scene grew to know their name.

“Fade,” Brookline’s second EP, (but first with Tommy Carter on vocals) was released in February of 2019 and the rest of the year saw the group taking the stage at some notable venues such as Albany’s Jupiter Hall and The Hollow as well as Long Island’s Amityville Music Hall. Brookline supported some big names, like Calling All Captains, Makari, Wolves at the Gate, and The Red Jumpsuit Apparatus.

The end of 2019 saw Brookline take a short break to recoup and feel creative once more, and in early 2020, production began on their third EP, “Where Do I Go From Here,” recorded, mixed, and mastered by Jake Mannix at Mixed by Mannix in Scotia, New York. The four track record sings of self confidence and perseverance through difficult times as well as dealing with feelings of loss and unknowing.