BOYSTOWN series author Jake Biondi has released the highly anticipated tenth book of his BOYSTOWN series. Biondi has once again teamed up with designer/actor John Logan to create the latest BOYSTOWN book cover.

“Tens books for the BOYSTOWN series is an epic milestone,” Biondi told fans of his book series. “I mean, how many book series get to three or four let alone ten books? Never in my wildest dreams did I ever think BOYSTOWN would be this successful when I first sat down to write it. I am so blessed and so grateful.”

Biondi added, “I love that fans have connected with the BOYSTOWN characters for so long and have stuck with them through all their ups and downs. These characters have become like family members to me personally – and to my readers as well.”

Advance reviews of the new book are extremely positive. “The characters have aged but the drama is brand new. Our favorite characters from the earlier seasons now have children who are now carrying the family names into the future and are now getting into more trouble than their parents did in the past,” wrote Rob Thompson on Amazon.com. “The relationships in BOYSTOWN Season Ten are steamy and full of emotions good and bad.” 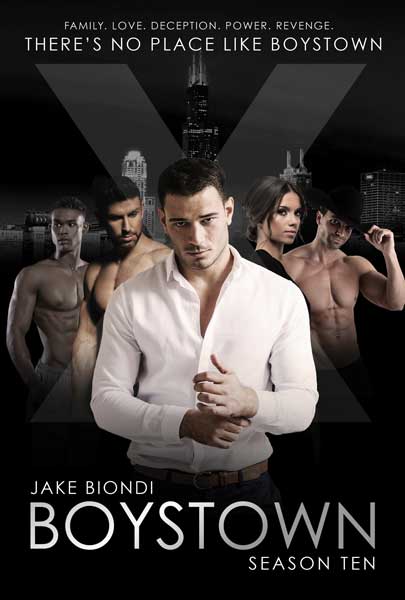 “The tenth installment in the BOYSTOWN series takes the reader on a wild ride that ebbs and flows across multiple generations. Through the clever use of flashbacks, Jake Biondi continues the saga of his beloved characters while introducing the reader to a whole new generation of Mancini and Ciancio family members who seem to have inherited the plotting, scheming, and revengeful traits that are present in both families. Biondi also introduces new characters who put others at peril. In typical fashion, the last chapter presents the reader with multiple unforeseen and electrifying cliffhangers that will leave readers simply stunned,” wrote Roger Ward on Amazon.com.

“Just when you think Jake Biondi and the BOYSTOWN series has nothing left to give, Biondi proves us all wrong with Season Ten,” wrote Shawn Knox on Amazon.com. “Biondi pulls out all the stops with this epic season and once again has us turning page after page rooting for our favorite characters. The BOYSTOWN series hasn’t lost its edge but only gotten better.”

“You can never go wrong with BOYSTOWN!” wrote Jan Van Es on Amazon.com.  “Another installment that leaves you breathless and aching for more.”

The epic tenth novel warranted an equally epic cover and designer John Logan certainly delivered. “Getting to design the tenth book was exciting! I wanted to make sure we stayed with the look of the previous seasons but also wanted it to stand out as its own entity. Since the other books each have their own categorized color, I created a black, dark and elevated look,” said Logan.

Biondi promised that readers won’t be disappointed by his latest installment. “Season Ten picks up right where book nine left off and slowly reveals all that happened prior to the time jump at the end of that book. I’ve gotten all kinds of questions from readers about the time jump. Season Ten gives me the chance to answer many of their questions while introducing them to the next generation of BOYSTOWN characters. In many ways, it’s two books in one.”

The BOYSTOWN book series continues to maintain an average customer rating of five stars, the highest possible rating on Amazon.com. “I am so proud of BOYSTOWN’s five-star rating on Amazon,” Biondi said. “It’s a tribute not only to the series itself but to the incredible fans that BOYSTOWN has all over the world.”

Like Loading...
Previous articleFergus releases ‘Enough for You’ via Goldun Egg Records
Next articlePsychedelic Indie Electronic from Seattle Musician Lomon