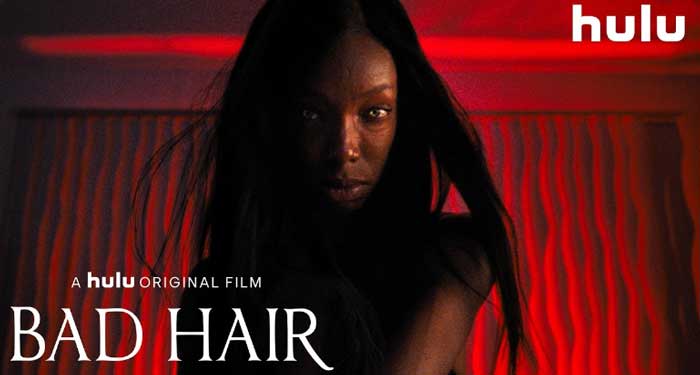 An aspiring T.V. producer is having an undeniably bad hair day.
Set in 80s L.A. and the inception of the black hair weave craze, MTV and black T.V. execs. This film fits nicely into the satirical horror movie genre. It centers around Anna (Elle Lorraine) an eager and hardworking executive assistant, working for a black music network called Culture. Anna wears her natural hair in afro hairstyles, as she has done since childhood, as do most of the women in the office. After a family dinner, Anna’s uncle lends her a book on slave folklore, called “the moss haired girl,” which recounts the story of a girl who’s Hair becomes possessed and drinks the blood of the townsfolk.

When Anna is over-looked for an on-air hosting gig on The Culture network, her new boss, Zora (played by Vanessa Williams) offers Anna the chance of finally getting a shot at her dream job. The one catch that Zora bluntly points out to her is, that in order to climb the ranks, broader her appeal to a white audience, and fit in with corporate America; she needs to books herself an appointment with high-end weave specialist, Virgie’s to “fix” her natural hair, making it more Europen in texture and therefore more in-line with her white counterparts.

The agonizing sew-in session at Virgie’s is an accurate flashback to anyone that’s had a weave installed, but she leaves the salon with the sleekest, shiniest and straightest hair imaginable. Hair that she’s finally able to flip over her shoulder like she’s in a L’oreal hair commercial. All the admiring glances from her co-workers, only encourage her to think she has made the right decision and is slaying her new look. Anna discovers pronto that Virgie’s Hair is cursed and has blood-thirsty wants and desires that threaten to dominate and take hold of Anna.

The horror element of the film really gets going now, with a somewhat theatrical feel to it, but we go with it, as the subtext of the film is evident (even if grossly exaggerated.) Any black woman that’s worn her hair naturally, especially in the corporate world knows only too well the pressures to conform to a style that’s acceptable to their non-black peers in the workplace. It’s been reported that some young black girls were suspended from school for choosing to wear their natural hair. Many black women choosing to wear natural hairstyles in the office, have been discriminated against and maligned for doing so. They are seen as non-conformists and therefore, troublemakers. Writer, director Justin Simien has cleverly highlighted this issue through the horror aspect of the film, without affixing blame or judgment and a sprinkling of humor.

Although Bad Hair is not a complex dramatic piece and it’s not meant to be. It feels as if Simien could have explored the ambivalence a black woman feels between wanting to be true to herself and having to comply or submit to white ideals of what is acceptable Hair in the workplace.

Near the end of the movie, the killer weave leaves behind mass carnage at the Culture office, but the equilibrium is somewhat restored once the sprinkler system is set-off. However, we don’t finish on a high; instead, we are left with a rather bleak narrative alluding to a slavemaster to slave women parallel, that was too rushed to be as impactful as it should have been.

The slew of cameo appearances in this movie is a thrill, everyone from Usher, Kelly Rowland to James Van Der Beek have guest spots.

Bad Hair is a nod to the challenges black women face in the workplace, regarding their hair, albeit a glib, tongue in cheek approach with nuanced undertones.

This movie review was written by Melissa Adotevi.

Melissa Adotevi is a UK born voiceover artist now living in Paris. As an avid TV watcher, reviewer and mother of 4, there’s not much she doesn’t have an opinion on.