Virginia Beach alternative rock duo Travelers have released their brand new single “UH OH,” the third single off of their upcoming 2019 debut album “Hideko.” “UH OH” is out on all digital platforms now. A continuation of their newly developed arena-tinged sound, Travelers are unraveling the style they have been creating for “Hideko.” Although an electronic-based rock sound is not what Travelers initially set out to create, the band sounds seasoned on “UH OH,” finding their style and steadily building on their new branding.

About the single, the band states:

This song is about fear and the great role that it plays in our lives. I try not to let it rule over all the decisions in my life, but one day while I was surfing, a shark popped up near me. It’s not unlikely that you’ll see one in the water, but this 6ft shark started circling me for a full five minutes. I’ve never been so taken over by fear in my life. That incident kind of sparked the creation of “UH OH”.

Travelers is an electronic alt-rock duo from Virginia Beach, VA. Made up of members Tom Kearns (vocals, guitar, percussion) and Brandon Jenkins (drums), the duo’s anthemic, arena-esque sound was not part of their origin. The natural progression developed from their incarnation in 2015, but through lineup changes, Travelers opted to stray away from their organic rock roots. Evolving into a heavily produced, vocal-layered, rich, percussive electro-rock duo, Travelers’ upcoming single, “UH OH” is the third showing of what they have been exploring. Their new single “UH OH” is available on all digital platforms now. 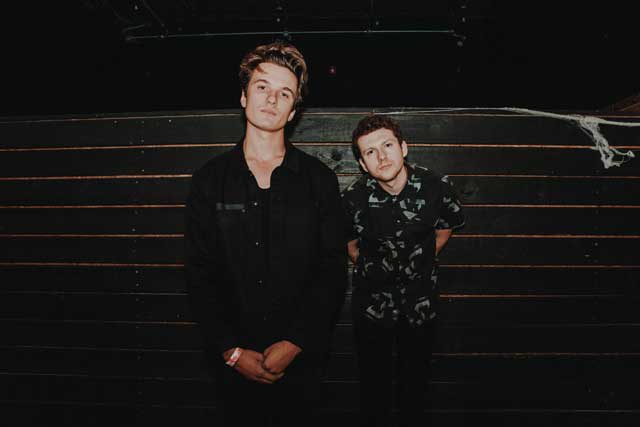