I think the best feeling in the world to have as a writer is when the characters you create take over and decide to write their own story. You become a medium through which they express themselves. I can’t claim that it happens with every book I write, but it certainly happened with Volatile, the first novel in my Treacherous Chemistry series. In fact, the characters took over to such a degree that they refused to stay silent. Hence, I wrote another story to sate their needs.

Magnetic is a short companion story to Volatile, written within the timeline of the longer novel, but from Dante’s point of view instead of Chris’. It was a story that begged to be written, and Dante nudged me again and again to let him out. This meaning that these characters have actual conversations going on in my head back and forth with each other. How’s that for never being bored?

So, this degree of character control happens sometimes, at least for me. It’s thrilling as well as scary because I’m slightly worried each time that I’m heading in the wrong direction. Sometimes I take a turn around the block one time too many, but that’s okay. It just means I get a little more work on my hands as I have to rewrite the first draft into something that makes more sense and stays together. I wouldn’t call it the most efficient way to write 100% of the time, but it’s certainly more enjoyable for me. I get to experience the story as it creates itself.

This method of writing means I can brand myself as a pantser rather than plotter. My characters determine where they go without my permission (or at least it feels that way). I allow them a degree of autonomy and relegate myself to clean-up crew. They determine a lot of the plot.

They make me question my sanity.

Characters can be head strong, and Dante is absolutely one of my loudest characters although he is silent in most of Volatile. Perhaps that silence was the reason it felt imperative to write Magnetic. Dante’s thoughts on paper meant that I allowed one of my most outwardly secretive characters to be exposed. Vulnerable. One year ago, when I published Volatile, I’m not sure he (read I) was ready for that vulnerability. He’d learned to hide for years on end, shutting down reactions to feelings he couldn’t control. He’d learned to walk away when things got too hard. One year ago, I couldn’t have written from his perspective.

Once in a while, I wonder if this is how every writer feels—this co-dependency between character and writer. I would hope that other writers have a little bit more control, but also that they get the opportunity to lose that control and let their characters come alive.

So, my fellow writers. Do you recognize any of this from your writing process? And, to you readers, do you wonder sometimes if the characters you read about are out there somewhere? He’d been afraid of me, and I had used fear to keep him away until I couldn’t stand to be anywhere but close.

Dante Heron has lived a life surrounded by pointless affection and impossible demands. Driven to the brink by his parents in pursuit of fame and fortune, he has learned to circumvent anything that would force him to feel more than he can stand. Until Chris. But then, he drove away Chris just as surely as he’d chased off everyone else.

Lost and afraid of the truth of that rejection, Dante pines from afar—more used to suffering than facing his problems. However, his feelings continue to torment him and no matter how many times he wants to leave the past behind, it won’t let go.

Publisher’s Note: Magnetic is a companion book to the Treacherous Chemistry series and should be read after Volatile to appreciate the story.

Raised in one of the cold corners of the world, Avylinn spends her days either wrapped up in a blanket or basking in the precious sunlight. When she can’t choose herself, she’s holed up in an office working with climate research that has little to do with the worlds and characters she creates in her vivid dreams.

Always the emotional one, she has found her outlet in writing, voicing thoughts, emotions and fears through her characters that feel very much alive to her. And, what began as a hobby soon took more and more time in her life until she realized that she had left her old life behind and entered a new one where her emotions turned into a super power—ready to launch at her poor readers.

She recharges with the help of coffee, cinnamon buns, popcorn and occasionally a healthier alternative. 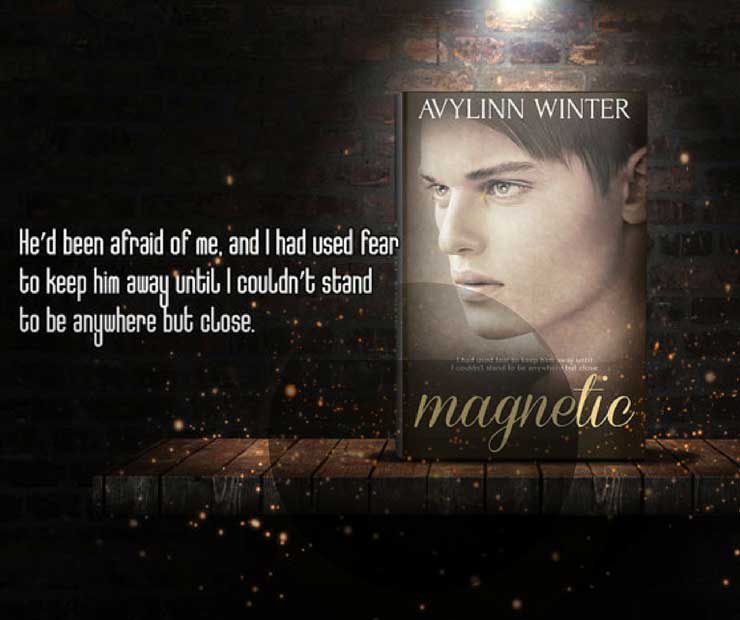