Things to do when you’re dead

by Susan Mac Nicol
in Columns, Points of Sue
Reading Time: 2 mins read
A A
0 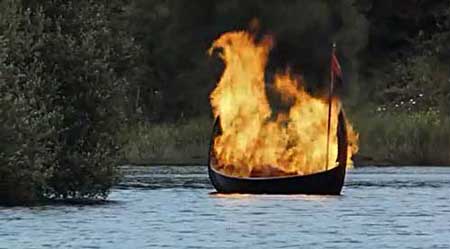 This is not a particularly cheery post so if you don’t like talking about death and dead bodies, don’t read it. Or if you have any very religious views. Again, I suggest you leave now.

My family and I had the most entertaining dinner time conversation the other day. It started off with us all sat around the dinner table deciding how we wanted to go out into Never Never land when we were dead.

I have this predilection to have a Viking funeral. I want to be laid on a wooden pyre, set on fire and pushed out to sea The Thames or wherever they’ll allow this to happen. I really do. I don’t want to be buried as I have an aversion to things eating me. I have a dislike of people coming to visit me at my grave when I can’t talk back. I have a horror of people visiting me in Perpetua with sickly smelling flowers, when they should be getting on with their lives.

Cremation is good, but ever one for a bit of flair, I like the Viking idea very much. Naked or clothed, I don’t really mind, just lay me down on the wooden thingy, light a match and let me go. I’d love someone to build a proper Viking boat and fill it around me with chocolate and crisps, just to put me in the right frame of mind when I get to Valhalla, but I doubt that’s going to happen. So my family have been given their orders and I hope they manage to pull it off –somehow.

My son came up with the idea of making her into a diamond. (He was short of money at the time and I have a feeling he might have pawned her the minute she was ‘diamondised’ for want of a better word.)

She thought this wasn’t too bad an idea (being diamondised not pawned) but then things spiralled out of control and suddenly, we were running a Mafia like family empire made rich by the bodies of dead people being stolen from morgues and crematoriums, being converted to precious gems and sold on the black market.

My family can sometimes go to extremes when we talk about stuff, going from the sublime to the total ridiculous in five seconds flat. I think it’s the writer in me coming out in them.

Of course, there’s always one in every family. Another member of the troupe decided they wanted a Parsee ceremony where the dead body is placed in a place known as ‘The Tower of Silence’ which is open to the air in a high place, there to be consumed by vultures as they slowly decomposed.

Just in case you’re interested in any of these scintillating possibilities as how to dispose of your dead body, take a look at the links below. You might get some ideas.

Me? I’ll stick with the old heave ho down the Thames, warm and toasty in my very own funeral pyre.