by Divine Magazine
in Entertainment News
Reading Time: 3 mins read
A A
0 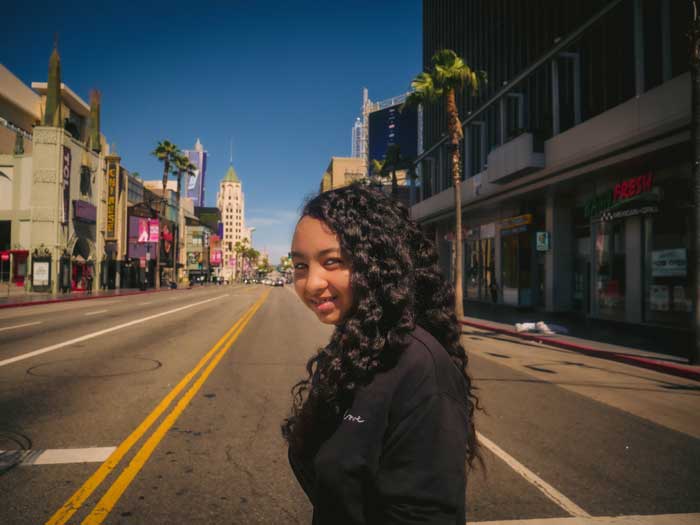 Kalia Love Jones, animator, director, and producer continues to break barriers in the entertainment industry and in Hollywood.

Kalia Love Jones, 14-year old director of “The Power of Hope” animated short film receives the prestigious Youth Visionary Award from the 29th Annual Pan African Film and Arts Festival. Laya DeLeon Hayes, actress in the CBS drama, “The Equalizer” and the voice of Doc on “Doc McStuffins” on Disney Junior presented the Youth Visionary Award to director Kalia Love Jones. Kalia Love Jones is the youngest recipient to receive the Youth Visionary Award and is the youngest director to be nominated for a Pan African Film and Arts Festival Award for Best Short Narrative (Animation or Live Action) and is the youngest filmmaker ever nominated for a NAACP Image Award in the Motion Picture category of Outstanding Short Form (Animated).

The Pan African Film Festival (PAFF) was co-founded in 1992 by actors Danny Glover, the late Ja’Net DuBois and executive director Ayuko Babu. PAFF has become America’s largest and most prestigious Black Film Festival. Each year PAFF screens over 190 new Black films from the United States, Africa, the Caribbean, South America, the South Pacific, Europe, Canada, and Asia, made by or about people of African descent.

The NAACP Image Awards honor the accomplishments of people of color in the fields of television, music, literature, and film and also recognizes individuals or groups who promote social justice through creative endeavors. Non-televised award categories were live streamed on March 22-26, 2021. The virtual ceremonies recognized winners in more than 60 non-televised award categories in the fields of television and streaming, music, literature, film and activism. The 52nd NAACP Image Awards was broadcast live on BET and was simulcast across ViacomCBS Networks including CBS, BET Her, VH1, MTV, MTV2, and LOGO on March 27, 2021.

“The Power of Hope” animated short film directed by Kalia Love Jones is inspired by a Michelle Obama speech that tells the inspirational story of a young woman with big dreams. An inspiring architect feels helpless when her mother falls ill, but moved by the words of Michelle Obama, she finds the will to persevere and bring her dreams to life. The animated short film “The Power of Hope” has been selected into four Academy Awards qualifying film festivals: Urbanworld Film Festival, LA Shorts International Film Festival, HollyShorts Film Festival, and the Pan African Film and Arts Festival.

“The Power of Hope” animated short film is written, directed and produced by Kalia Love Jones. She co-wrote “The Power of Hope” film’s song and funded the film on her own to prove to her father how serious she was about the film. Kalia Love Jones looks up to influential female figures like Michelle Obama, Oprah Winfrey, and Ava DuVernay and spends hours every day drawing, crafting, and studying films to create unique animations. Kalia Love Jones is a 14-year old filmmaker that is inspiring young women to pursue their animation and filmmaking dreams.

The Dinah 2021: A big wow moment and a moment that no one will forget

PALM SPRINGS, CA - It’s a wrap! The Dinah finally celebrated its 30th Anniversary in a way that can only be described as spectacular. This was not just...