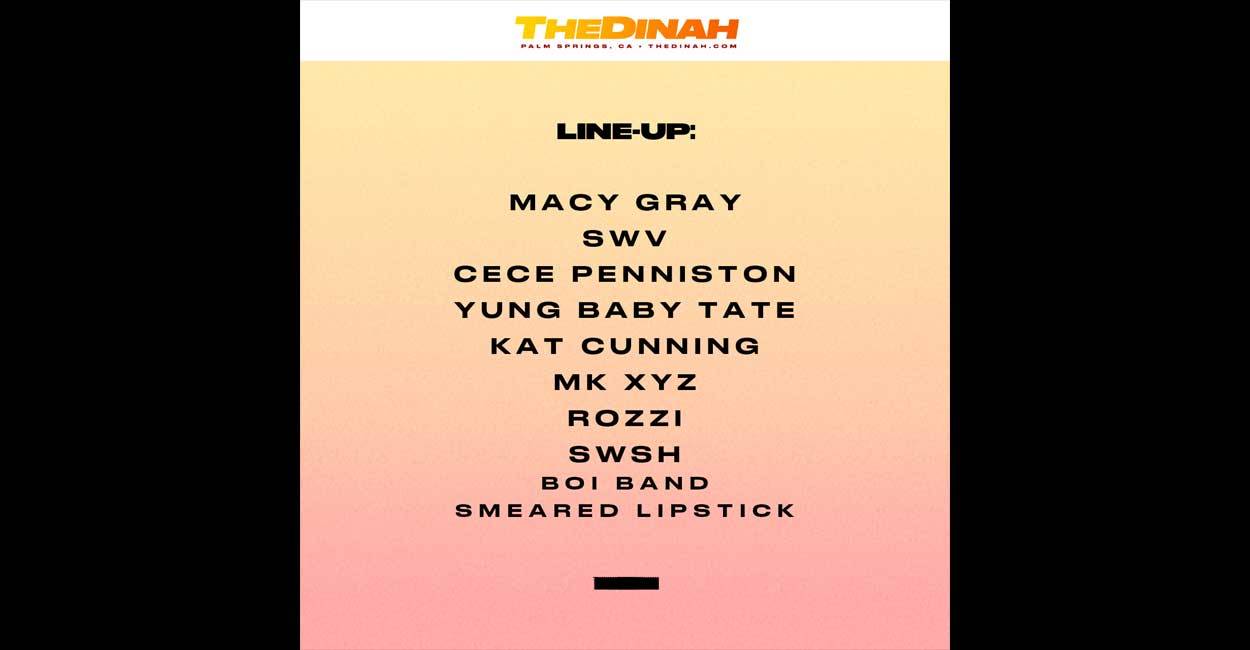 Celebrating 30 incredibly successful years as the largest and longest running LGBTQ+ womxn party in the world, The Dinah is delivering the ultimate roof-raising 5-day event with one of its biggest lineup ever.

With over 30 million records sold, the BET Award-winning and four-time Grammy nominated legendary trio, SWV, is one of the most successful R&B female groups of the 1990s.

The soul trio will bring their hits “Weak,” “Right Here (Human Nature Remix),” “I’m So Into You” and “You’re the One” to The Dinah for a headlining performance at the Sunday Pool party.

SWV (Sisters With Voices) — which features Cheryl Gamble, Leanne Lyons and Tamara Johnson – recently performed on Verzuz against Xscape. After performing to over 3.5 million viewrs and garnering 1.25 billion impressions, Billboard crowned them the winner, and indicted the band onto their prestigious Top 40 Female Group of All Time.

Also performing at the Sunday Pool Party is SWSH, the los Angeles based rapper, lyricist, producer, singer/songwriter and multi-talented non-binary individual who has crafted a distinct and signature sound that’s all their own.

They released their spirited debut EP SOUP in collaboration with J.KELR, producer for Kendrick Lamar, Chance the Rapper, and Anderson. Awarded with the top spot and labeled as one of this year’s essential R&B albums, the announcement also served as Swsh’s radio debut, with SOUP‘s lead track “Shouldn’t” hitting airwaves for the very first time.

Keeping millions of fans dancing beneath disco balls and neon lights all over the world for 3 decades now, Cece Peniston will electrify Dinah attendees taking the stage of the Palm Springs Convention Center on Friday, October 1, 2021.

Crowned one of the 100 Top Dance Club Artists of all Time by Billboard magazine, Cece Pensiton continues to be a fixture on the club scene with her chart topping international commercial hits “Finally”, “We Got a love Thang” & “Keep On Walking”. One of the biggest 90s club legends, Peniston’s signature song “Finally” became one of the biggest dance singles, selling 3 million copies worldwide.

LA-based soul-pop powerhouse Rozzi makes her Dinah debut on Saturday, October 2, 2021, at the Pool Party before kicking off her first headline tour in collaboration with Sofar Sounds. Already making a lot of noise, Rozzi is commanding the spotlight.

After making her late-night television debut on Jimmy Kimmel Live! in 2018, collaborations with the likes of Kendrick Lamar and Pusha T, a sold-out arena tour supporting Maroon 5 (during which she dueted nightly with the band on “Moves Like Jagger”), and a steady musical output, the San Francisco born singer/songwriter released her critically acclaimed Hymn for Tomorrow EP on BMG — the first installment of a new full-length album coming later this year.

Get used to Rozzi being everywhere because it’s already happening. Maybe you spotted her on the Political Platform NowThis. Or maybe you heard her moving single “Orange Skies” on Simon Le Bon’s WHOOOSH! Podcast. Or perhaps you’ve listened to her own podcast “Ugh! You’re So Good!”, which she co-hosts with Scott Hoying of Pentatonix.

The Dinah takes over the Hilton Hotel, The Palm Springs Convention Center, and AsiaSF in Palm Springs, September 29 through October 3, 2021, to present an unmatched weekend of high-energy performances.

Following CDC guidelines, full COVID-19 vaccination or a negative test will be required to enjoy the festivities.

For more information and updates go to: www.thedinah.com

. Full COVID-19 vaccination or negative COVID-19 test results will be required to attend the Dinah.

. Proof of vaccine or negative COVID-19 test required indoors when entering a bar or restaurant.

For more information and updates regarding the City’s COVID-19 response, visit www.palmspringsca.gov.

The series, a vibrant reimagining of the groundbreaking British...

It’s an artist’s world, with everything changing and evolving...

Queer as Folk is a vibrant reimagining of the...

The 22-year-old rapper out of Minnesota recently released ‘Cupid’,...