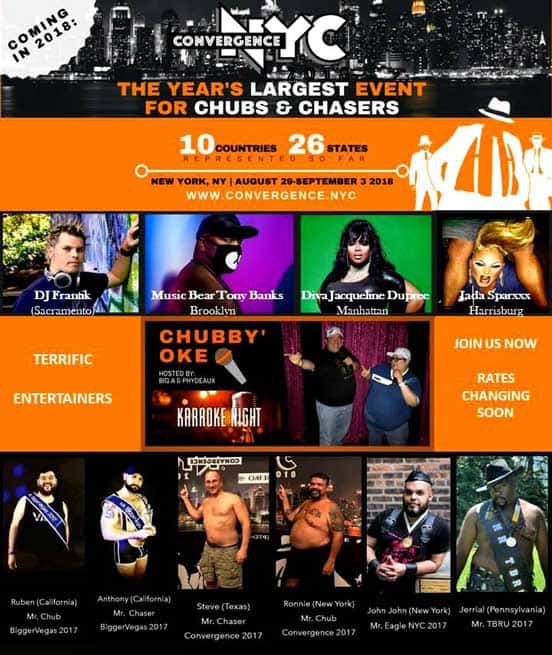 Convergence.NYC returns to New York City after 20 years with many exciting events to sooth and satisfy the appetites of many a big gay bearish male and those who admire them. The flavors of New York City will take center stage welcoming attendees from around the world while being supported by talented men from other states as well.

Convergence.NYC is excited to be featuring the talents of:

Sacramento, California’s, DJ Frantik, a member of our community, who has Dj’d at many venues across the country.  He was a featured DJ at Lazybear, Big Planet Big, white party love evolution and much more.  DJ Frantik spins a wide range of music from top 40, 80’s remixes, house music, EDM and more. He is currently the resident DJ for Badlands in Sacramento, California.

Brooklyn, New York’s, Music Bear Tony Banks a Hip- hop storyteller who has made a name for himself with his smooth rhythms, sick beats, and serious vocals. He stands out from the crowd as outspoken, unapologetic and uniquely talented. Tony also stands out for being an out-and-proud gay man in a culture that stereotypes gay African-American men. Music Bear looks past that and understands his true and honest identity through it all. Recently named one of the ‘Five Gay Men You Should Know’ by Manhattan Digest, Tony has taken that upfront attitude to packed shows across the United States and abroad, including a cruise ship in the middle of the Mediterranean Sea, SXSW, 35 Denton Festival in Denton, TX., Friday Night Live at Toronto’s Royal Ontario Museum, and Pride Festivals near and far.

Manhattan, New York’s, Jacqueline Dupree Known as the “Queen of Karaoke”, Jacqueline Dupree hosts several weekly NYC karaoke nights – and sings in her own voice.  Featured in Get Out! Nightlife Magazine and Divine Lifestyle Magazine, Jackie was dubbed a “Neo Disco Diva” and “Queen with the Big Voice”. Jackie has been entertaining audiences with her amazing voice and drag queen performances for 16 years and is now releasing her brand new single “I Don’t Want You No More”. Also known to NYC locals as a longtime LGBT league football player.

Harrisburg, Pennsylvannia’s, Jada Sparxxx is an insult improv comedian. She has worked all over the East Coast and LOVES being that BIG QUEEN. Her catch phrase and motto is “Big as a House and Potty Mouthed, that’s Jada Sparxxx!” if you love to laugh, SASHAY your ass.

Phoenix, Arizona’s big boys “Big A” and “Phydeaux” will present Chubby’Oke during our Convergence.NYC weekend. Their karaoke list has the oldies but goodies and the newer hits you sing to in the car!! They both host karaoke at their home bar, the Rock, every Friday and Saturday night. 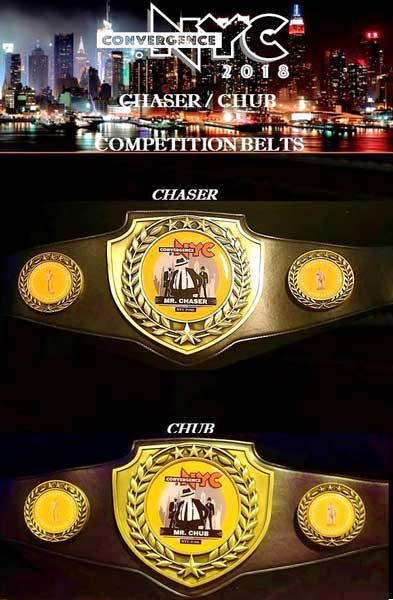 Then there is the Convergence. NYC  Chub & Chaser contest

Our judges have won other titles themselves and have previous experience with various competitions. They are:

Mr. Texas Bear Round Up 2017 / Jerrial of Pennsylvania