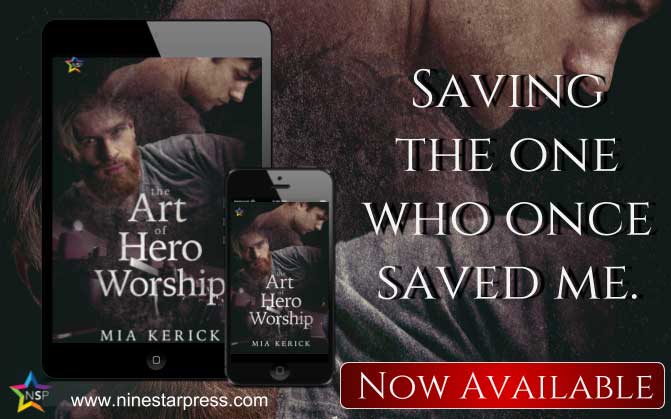 The Art of Hero Worship by Mia Kerick

College junior Liam Norcross is a hero. He willingly, even eagerly, risks his life to save a stranger as a murderous, deranged shooter moves methodically through the darkened theater on the Batcheldor College campus, randomly killing innocent men, women, and children.

The stranger he saves is college freshman Jason Tripp. Jase loses everything in the shooting: his girlfriend, who dies on the floor beside him, and his grip on emotional security. He struggles to regain a sense of safety in the world, finally leaving college to seek refuge in his hometown.

An inexplicable bond forms between the two men in the chaos and horror of the theater, and Liam fights to bring Jase back to the world he ran away from. When Jase returns to school, they’re drawn together as soulmates, and soon Liam and Jase fall into a turbulent romantic relationship. However, the rocky path to love cannot be smoothed until Jase rescues his hero in return by delving into his shady past and solving the mystery of Liam’s compulsion to be everybody’s savior. 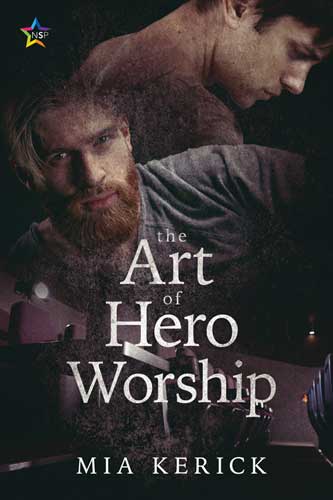 Title: The Art of Hero Worship

The Art of Hero Worship
Mia Kerick © 2018
All Rights Reserved

When Liam and I get back to campus and he walks with me to RetroHouse, we don’t hold hands. It doesn’t seem like the natural thing to do, and I vowed, just this morning, in fact, that I’m not going to do what’s expected of me, but rather what feels right.

BJ’s overnight guest is just leaving as we arrive at my room. She smiles shyly but manages not to blush at all, and makes her exit, shoes dangling from her fingertips. BJ is glowing in a way that’s new.

“Dacia’s a cool girl…such a super cool girl.” He stares after her as she walks to her room down the hall. “I might be in love.”

I can relate. I don’t say so, but I glance at Liam, and he’s studying me. “This is Liam Norcross. The guy I told you about.”

BJ snaps out of his love trance and throws himself into Liam’s arms. “You. Are. The. Man.”

Liam is at a loss for words.

“You saved my bro’s ass, and I wanna thank you somehow. Like, wanna meet a whole slew of freshman girls who’ll be thrilled to show you some major hero worship?”

Liam gently pushes BJ back and says, “Thanks, but no thanks.”

“Get used to having Liam around. You’re going to be seeing a lot of him.” I’m not going to spell it out for BJ, but I’ll give him lots of clues and plenty of fair warning.

“You guys are having like a total bromance!” BJ laughs so loudly it causes a return of my brain-splitting headache. “I gotta go get some food…used up a lot of energy last night.” He makes an “I had sex” gesture. “You guys wanna come along?”

Liam shakes his head, and I say, “I think we’re just going to hang out here for a while.”

“Yeah, right…go ahead and chill. Sorry—not sorry—if our room smells like sex.” And with that classy warning, he’s off to the dining hall.

“I can’t explain BJ. But I can apologize for him.” I lead Liam into my room. “Welcome to my humble abode.”

“It’s not even slightly cool.” I perch on the edge of the bed and gesture for Liam to sit beside me. “Is the reason you decided not to live in RetroHouse because you didn’t want to run into me?” I ask this bluntly, embracing the new, honest me.

“I’m gonna level with you, man. When you didn’t call me back last summer, I got messed up in the head. And I figured that running into you every other day wouldn’t help me get over you.”

I touch his thigh. It’s rock hard beneath his black jeans. “I’m sorry I screwed up your housing.”

Liam shakes his head. “You know, I’m actually glad I have my own place off campus. I think I’ve had enough of dorm life.” He again checks out the standard college guy mess that is our room. “Maybe you did me a favor.”

I’m also happy we’ll have a place away from school to hang around, so we won’t feel like we’re under a microscope. Students and faculty know we’re two of the survivors of the shooting in the theater, and me sleeping in his dormitory room in RetroHouse would have created gossip we don’t need to be subjected to. “I appreciate your place off campus, too. It feels more relaxing than here. A little more like a home.”

Liam smiles— It’s honest and open and terrifying and brilliant, and it warms me in places that have always been, at most, tepid.

BJ was right: Liam is the man.

Mia Kerick is the mother of four exceptional children—one in law school, another at a dance conservatory, a third studying at Mia’s alma mater, Boston College, and her lone son still in high school. She has published more than twenty books of LGBTQ romance when not editing National Honor Society essays, offering opinions on college and law school applications, helping to create dance bios, and reviewing English papers. Her husband of twenty-five years has been told by many that he has the patience of Job, but don’t ask Mia about this, as it is a sensitive subject.

Mia focuses her stories on the emotional growth of troubled young people and their relationships. She has a great affinity for the tortured hero in literature, and as a teen, Mia filled spiral-bound notebooks with tales of tortured heroes and stuffed them under her mattress for safekeeping. She is thankful to NineStar Press for providing her with an alternate place to stash her stories.

Her books have been featured in Kirkus Reviews magazine, and have won Rainbow Awards for Best Transgender Contemporary Romance and Best YA Lesbian Fiction, a Reader Views’ Book by Book Publicity Literary Award, the Jack Eadon Award for Best Book in Contemporary Drama, an Indie Fab Award, and a Royal Dragonfly Award for Cultural Diversity, among other awards.

Mia Kerick is a social liberal and cheers for each and every victory made in the name of human rights. Her only major regret: never having taken typing or computer class in school, destining her to a life consumed with two-fingered pecking and constant prayer to the Gods of Technology. Contact Mia at miakerick@gmail.com or visit at www.miakerickya.com to see what is going on in Mia’s world.