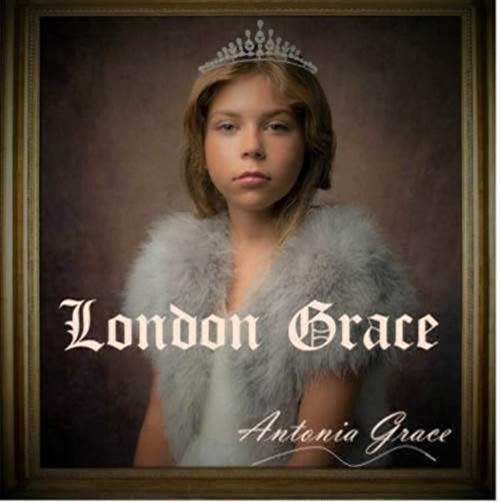 With celebrity fans like Depeche Mode’s Dave Gahan and radio play across the world, Antonia Grace has now released her first EP, entitled “London Grace”, five tracks of perfect pop which not only show her versatility as a performer but also her remarkable vocals – all the more incredible as she is only ten-years old! Antonia is an actress and singer who has drawn in an audience of all ages from around the world, enraptured by both her personality and her singing. Her singles My Little Ten and Tick Tock and Bonbons have seen Antonia’s music receiving radio play, magazine features and online coverage around the world but the Anglo-French star is now releasing the most comprehensive look at her musical world yet which, as you’ll see from the cover, she is hoping for royal approval of!

French-born and London-based, Antonia Grace could certainly never be accused of taking her time, acting in musical theatre since she was only five-years old and performing as a singer in front of 1000 people when she was still only seven! She has quickly adapted to writing her own lyrics, keen to give young people of her age a voice in a society which often silences anyone below voting age. Antonia has already performed live in not only her native France (at the l’Isle Adam music festival) but also at a vocal showcase in Los Angeles, where she won the Best Music Video Award at the Vocalstar Awards, beating hundreds of other competitors, whilst also rubbing shoulders with famous producers.

Perhaps even more remarkably, Antonia Grace’s inspiration to take vocal coaching lessons and release her music is none other than Depeche Mode singer, Dave Gahan! Taken by her parents to see the band when she was seven, she became obsessed with appearing on stage in front of such an adoring audience herself and has never looked back. Antonia has previously released videos to Dave Gahan’s Tomorrow and Goldfrapp’s Ocean (which was supported by Major World Associations in Forest and Ocean Protection) and released her first single, N.E.Thing, recorded at London’s legendary Abbey Road, in 2019. Released as the first single from her debut EP to be entitled London Grace, Antonia’s mature outlook and expressive voice which sounds like it comes from an established singer many years her senior. “London Grace” features five tracks which perfectly showcase Antonia’s talent as well as giving an insight into 2020 from the perspective of a young person. Featuring not only My Little Ten and Tick Tock and Bonbons but also Hideaway, Something He Said and Bad Story, which tells of Antonia falling in love with a vampire! “London Grace” is perfect for blowing away the gloomy clouds and escaping into a perfect pop landscape.