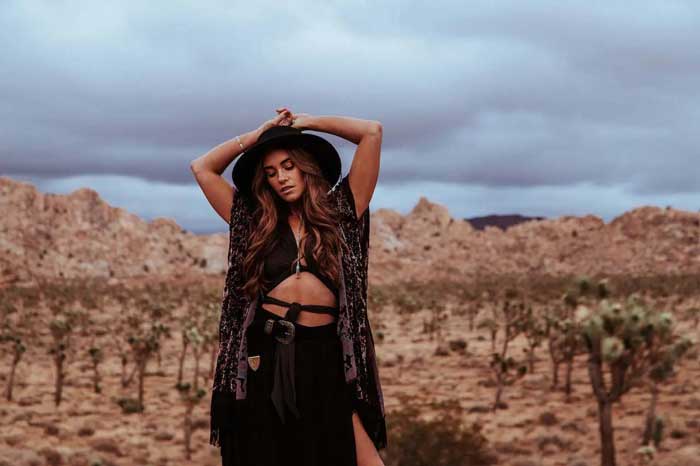 Emerging pop-Americana artist, Tara Kelly, has released a new music video for her single “The River.” This dynamic folk/pop-country crossover is a stomp and holler break-up anthem with a melodic structure bound to catch any pop listener’s ear. Her empowered female voice illuminates her lover’s infidelity, while the lyrics portray a dark and stormy dive into a cascade of deception. “The River” is available now to download and stream, and watch on YouTube.

Co-starring Hunter Garner, the moody and vulnerable video follows Tara Kelly as she discovers and contemplates her partner’s infidelity. Shots of the happy couple together are juxtaposed by somber yet stunning frames of Kelly as she comes to terms with the reality of her rocky relationship. Putting a new spin on cosmic country, Tara Kelly’s songwriting style evokes a dark and mysterious edge as her lyrics reflect a gamut of lived experiences from heartache to mental health awareness, all of which are perfectly displayed in the striking video. “I’ve been writing and experimenting with sounds and deeply learning lessons about myself as an artist,” she says. “It has allowed me to collaborate more effectively, speak my truth with kindness, and build my dream team of writers and creatives.” Co-written with Stefan Pajaro-van de Stadt and produced by Alex Wilke, the driving acoustic guitar line in “The River” is laced with pedal steel licks, a cinematic violin, and full harmonies. The production is underpinned by the soft sounds of a storm rolling through, parallel to her southern gothic storytelling.

Hailing from a rural town in southern New Jersey, Kelly moved to Los Angeles to write and perform, securing a show at the iconic venue, Troubadour. Kelly was also asked personally by Rhett Miller of Old 97’s to sing his hit duet “Fireflies” with him on a stop in Los Angeles after posting a cover of the song on her Instagram. Kelly’s sound is deeply influenced by cosmic American music, fathered by Gram Parsons in the late 1960s and popularized by the likes of Linda Ronstadt and Brandi Carlile. She also draws inspiration from bands like Fleet Foxes, The Civil Wars, and Mandolin Orange; while her songwriting is shaped by the word-play of Kacey Musgraves, the raw vulnerability of James Bay, and the unabashed and fierce-feminine power of Maren Morris.

Highlighting themes of infidelity, heartbreak, shame, and love – Tara Kelly’s epochal video “The River,” is bound to make an impact. With her desert-chic appearance stemming from  Stevie Nicks and Janis Joplin’s fashion influences, this folk-Americana singer puts a new spin on romance and modern folklore.

Download or stream “The River” on Spotify and watch the new music video on YouTube. Keep up with Tara Kelly’s musical journey on social media @tarakellymusic and subscribe to her YouTube channel, Tara Kelly.