Seth Arnold learned at an early age that two things in life could make his soul soar—his violin and Kelly Cruz. In Seth’s uncertain childhood, the kindness of the Cruz family, especially Kelly and his brother, Matty, gave Seth the stability to make his violin sing with the purest sound and opened a world of possibility beyond his home in Sacramento.

Kelly Cruz has loved Seth forever, but he knows Seth’s talents shouldn’t be hidden, not when the world is waiting. Encouraging Seth to follow his music might break Kelly’s heart, but he is determined to see the violin set Seth’s soul free. When their world is devastated by a violent sexual assault and Matty’s prejudices turn him from a brother to an enemy, Seth and Kelly’s future becomes uncertain.

Seth can’t come home and Kelly can’t leave, but they are held together by a love that they clutch with both hands.

Seth and Kelly are young and the world is wide—the only thing they know for certain is they’ll follow their heartstrings to each other’s arms whenever time and fate allow. And pray that one day they can follow that string to forever… before it slices their hearts in two. 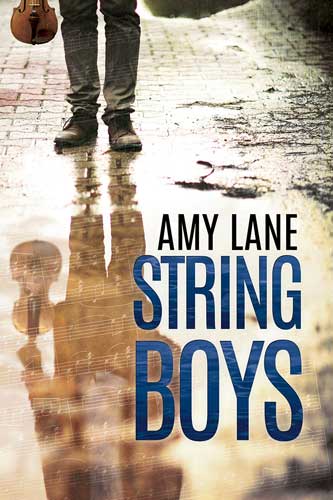 Amy Lane takes the reader on a journey that is harrowing yet ultimately uplifting. I was utterly riveted from the first page and I have a feeling this story will stay with me for a very long time.

Amy Lane is one of those rare authors who consistently writes extraordinary stories that manage to completely engross the reader with intricately layered characters and plot lines. She is a master storyteller and String Boys is a perfect example of her gift.

After the death of  Seth Arnold’s mother in a car crash his father decides a new city far from painful memories is best for both of them. Moving to a fourplex in Sacramento is not the immediate answer they’d hoped for, however, and with Seth’s father continuing to rely on alcohol to dull his heartache more pain ensues. If the family living in the apartment above them have any say in the matter, however, they will not face this alone. Xavier (Javi) Cruz has recently reunited with his wife Linda and their four children; Matty, Seth’s best friend in fourth grade, Kelly a year below them, and younger twins Lily and Lulu. When Javi hears violence in Matty’s friend’s apartment he intervenes and a bond is formed between these two households that looks set to last a lifetime.

When retired music teacher, Mrs Sheridan returns to the boy’s school with a donation of nine second hand violins and her expertise, a group of boys is selected to learn some songs for the school Christmas concert. Seth, Matty and Kelly are among those recruited and Seth’s life, and the future he envisaged, are forever changed. Seth has a natural ability that quickly turns into a passion, a passion that could help him escape to a better life, if only he’s willing to take that leap.

Growing up in a less than savoury area of the city means that the boys need to stick together to survive. They have always had each other’s backs and not even the school bullies can divide them; or so it seems. As they grow older Seth’s extraordinary talent blossoms and a long simmering attraction explodes between him and Kelly. Unwanted attention from an evil local boy, and a new girlfriend in Matty’s life lead all the boys down a path that will result in events beyond anything they could have imagined in their worst nightmares. As Seth and Kelly fall in love their world explodes around them and nothing will be the same again.

String Boys follows the journey of two beautiful young men from friendship to love and from childhood to adulthood. There are separations and tragic losses, events that will come close to breaking them and within it all a love story that will touch your soul. This book broke my heart and very slowly put it back together again, only to repeat the cycle. It was flawlessly told and as gritty as life in these suburbs can get. Amy Lane takes the reader on a journey that is harrowing yet ultimately uplifting. I was utterly riveted from the first page and I have a feeling this story will stay with me for a very long time. I will certainly reread it and I doubt it’s impact will be any less with each revisit.

Amy Lane dodges an EDJ, mothers four children, and writes the occasional book. She, her brood, and her beloved mate, Mack, live in a crumbling mortgage in Citrus Heights, California, which is riddled with spiders, cats, and more than its share of fancy and weirdness. Feel free to visit her at www.greenshill.com or www.writerslane.blogspot.com, where she will ride the buzz of receiving your e-mail until her head swells and she can no longer leave the house.

Why Are More People Deciding To Move to Alaska?