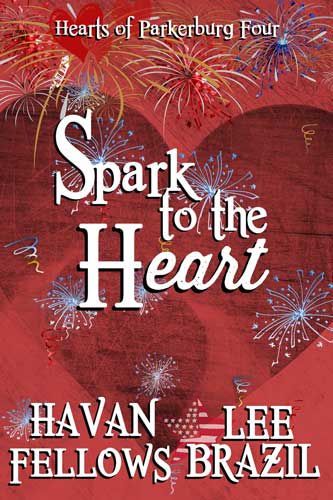 Spark to the Heart by Lee Brazil & Havan Fellows

As a misguided youth, Rosy loved being that kid in Parkerburg—you know the one that everybody swears will end up in jail or comatose—until one summer day on the back roads of town when two lives came to a screeching halt. 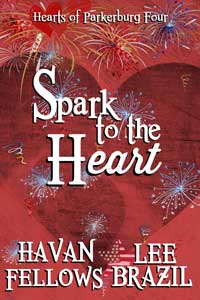 Thirteen years later, Rosy owns the local pub on Maple Street and makes a good show of how he’s recovered from tragedy. He even convinces himself…until he meets the new man in town and realizes just how okay he isn’t. With the demons of his fatal past still stalking him, Rosy has no idea how to switch from simply existing to actually living.

Angus “Jet” Manheim—famous for his smooth, sexy voice and notorious for his hard partying ways—sped through most of his adult life on stage and in the recording studio. Sober and retired to the quaint New England town of Parkerburg, Jet’s ready to slow his soundtrack…until his compelling neighbor—a grumbling, muscular mountain of a man with an odd name—ups the tempo.

Frequently absentminded, Jet finds Rosy an easy object of focus, a solid center around which Jet hopes to build a future. But retirement isn’t easy. The entertainment industry doesn’t stop knocking just because you hang a do not disturb sign.

When Rosy’s and Jet’s pasts try to harmonize with their present, they might have to decide whether the chorus is worth repeating.

The Hearts of Parkerburg stories can be read as standalones, each with a HEA…but trust me, you’ll want to read about all the sweet happenings in this quaint little town.

Series: Hearts of Parkerburg, book 4 – can be read as a standalone

Living in Parkerburg is just fine. Friendly people who don’t ask much, they know everything about each other and are very forgiving and unprejudiced.

Years ago Jet had visited Parkenburg shortly and was charmed by this little town, the people, the kindness. He had in his mind whenever he would retired he would go to this town to settle.

And here he is starting a kind of a music shop with everything what involved music.

A sparkling read, witty and steamy with two hot guys.

Fast forwarding Rosy, owner of Rosy’s bar, sees newcomer Jet and thinks….. “jummy…just how I like them…”

They are hot and easygoing until Rosy understands that Jet is/was the lead singer of a famous rock band.

A band Rosy has very bad memories of….a band who had a big role, thirteen years ago, in changing Rosy’s life irreversible and in a very ugly way

After the knowledge Rosy behaves strange and rude which leads to confusion by both man.

Jet wants more but Rosy is not himself anymore.

Fast forwarding story. The side stories completes the main course. The personalities are strong witty and tough. Powerful written and very captivating.

A rough read that felt honest and authentic with the reality of life in it.

I enjoyed the ride of Rosy and Jet 🙂

Somewhere in a small town in up-state New York are a librarian and a second grade teacher to whom I owe my life. That might be a touch dramatic, but it’s nevertheless one hundred percent true.

Because they taught me the joy of reading, of escaping into worlds crafted of words.

Have you ever been nine years old and sure of nothing so much as that you don’t belong? Looked at the world from behind glasses, and wondered why you don’t fit?

Someone hands you a book, and then you turn the page and see… There you are, running from Injun Joe in a dark graveyard; there you are fencing with Athos; there you are…beneath the deep blue sea- marveling at exotic creatures with Captain Nemo.

I found myself between the pages of books, and that is why I write now. It’s why I taught English and literature for so many years, and it’s why my house contains more pounds of books than furniture.

If I’d had my way, I’d have been a fencer…or a starship captain, or a lawyer, or a detective solving crimes. But instead, I am a writer, and I’ve come to realize that’s the best thing in the world to be, because as a writer, I can be all those things and more.

If I hadn’t learned to value the stories between the pages, who knows what would have happened? Certainly not college…teaching…or writing.

I annoy, love, respect, scare, seduce, hurt, anger, infatuate, frustrate, flatter, envy, amuse and tolerate everyone. I just do it better in writing thanks to a little thing called…edits.

Just like every other red-blooded human—I get a little bouncy when I get mail (any kind too…email, comments, private messages…you wanna do it, do it with me *winks*). So feel free to drop me a line—whether it’s on my blog, twitter, PInterest, or you track me down on FaceBook or Google +…it’s easy to catch someone who wants to be caught.