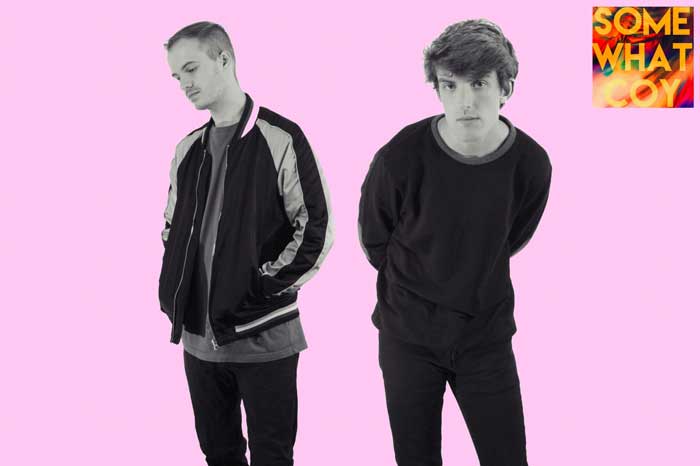 On-the-rise alt-pop duo Somewhat Coy, comprised of Connor McCoy  (vocals) and Matt Browning (production),  have released their debut single, “Honest,” an instant classic that dives headfirst into the insecurities of love. The duo gracefully exposes the unspoken reality of when a relationship has run its course, and the difficulty behind telling both yourself and your partner the truth. “Honest” is now available to stream and download on digital platforms.

As smooth melodies intertwine with feathery vocals throughout the track, the duo paints a picture of raw emotion trapped beneath words.  From the outset,  the single beautifully crescendos, while McCoy effortlessly harmonizes implicit truths. The pair explained that they wanted to describe the feeling when you are stuck in denial, and your body won’t allow you to speak on the way you feel honestly. The plucks from the electric guitar, along with the atmospheric percussion, set the tone in a balletic fashion, creating a track that is both euphoric and upbeat.

The dyad met as undergrads in Boston before moving to Los Angeles to continue their careers as writers, producers, and composers. “We’d like to say this song ‘basically wrote itself’ or whatever, but that couldn’t be farther from the truth. It was a grueling process that ultimately would take us three years to finally release,” McCoy explains. He left a demo idea on Browning’s computer one day while he was out, and the framework of Somewhat Coy began to manifest from there. The demo prompted the two to embark on the journey of fine-tuning the single while simultaneously making the move from the East Coast to the West Coast. “‘Honest’ was the first song that we wrote when we were both back in college in Boston. We were then just learning how to combine our talents, and what sort of music we wanted to create.” The duo aims to emulate the honesty and rawness of 90s alt-rock bands with the cleanliness and impact of modern pop music, and does just that with their debut.

“Honest” is Somewhat Coy’s debut single, knocking over the first domino of many on their road to success.

Download and stream the EP across all digital media platforms worldwide, now.