Hi, everybody! I’m Lou Hoffmann, very happy to be here on Divine Magazine celebrating my new YA fantasy book release, Ciarrah’s Light. This is book three in The Sun Child Chronicles, which will be six books long, and I’m writing book five now. By this time in our acquaintance, I’ve become pretty close friends with the characters in the series. I know that might sound a little strange, but hey, we spend a lot of time together! They surprise me with things they say and do, just like people IRL. Here’s some of my favorite words from a few of them, starting with Lucky, the gay teen protagonist also known as Luccan, who’s destined to be Suth Chiell—Sun Child—of the Ethran Sunlands.

This first is shortly after Lucky has been rescued from a bout of disturbing illness laid on him by foul magic. He’s had a nice dinner and birthday cake at the wizard Thurlock’s house. He’s talking to Han, his uncle.

No, Uncle Han. I’m not (happy). And here’s why. Thurlock sent me to bed like I’m a child who doesn’t matter and doesn’t know anything. I know that what you’re talking about in that meeting concerns me, and guess what? I might not get everything, but I’m smart enough to figure out the important points. And I know some of it is bound to be hella scary, but I can deal with that. And you know what else? I hate not knowing things! For as long as I can remember—even if that’s not all that long—I’ve felt like if I at least know what’s going on, I stand a chance of surviving it. So no, I’m not happy. In fact I guess you could say I’m kinda pissed.”

I love this little monologue because Lucky stood up for himself, but more than that, I love that Lucky has grown up enough to demand to participate in important talks, no longer running away from what he is supposed to be growing into. I’m proud of him!

From Han Shieth, Lucky’s uncle. They were in the Night House—a place where the dead are laid out for final visitors and prepared for a funeral pyre—and Han had commented about one of the dead, saying she was a beautiful person. Lucky unthinkingly tries to correct him, as the body appears to be male.

“Don’t you know that the shape of the body doesn’t always dictate the shape of the soul occupying it? Jehrine may have had a body like a man’s, but she knew herself to be a woman. […] “You should have seen her dance, Luccan. Heard her sing and laugh and comfort her little brothers and sisters. Watched the way she navigated the world every day. You would have known what a strong example she was of the best a woman can be.”

I don’t think I have to explain why I love that, do I? He surprised me when I heard his words, but I knew they were the simple truth

And now from Thurlock, the wizard who’s more than a thousand years old, from whom we expect wisdom, and he does come through with it sometimes. I like this little speech because it explains so well the benefit of having “destiny” involved in a world’s business. I mean, I’m not convinced such a thing exists here in the Earth we know, but for Ethra, it seems like a good thing.

“You all know that in the Sunlands we do not have an autocracy. We do not have royalty. But when the stars are right for it, we do have a Suth Chiell—Behlishan’s own blessed child. The Suth Chiell doesn’t rule—we have councils like this one and the even less effective larger one in Nedhra for that purpose. Yes, I am sorry to say it, but we have what Earthborns call a ‘bureaucracy,’ government by rule-making. Nevertheless, at such times as we have a Suth Chiell among us, we accord to him or her certain powers because of the special abilities such a one is born with—because we know those powers exist so that we all can be safer, can live better lives.”

But then, sometimes, Thurlock is a cranky old man, and I love that because he makes me laugh. Here he’s trying to help a California condor shifter named Henry by arranging some magic that will help him not be distracted by dead things—food—when he flies. He told Henry to shift, and Henry had the effrontery to ask why.

“We-ell… because you really want to be helpful, perhaps. Or, if not, because I am a wizard of wide renown and you don’t want to spend the rest of your life as a crawfish.”

I leave you with that giggle, except I’ll take a minute to let you know I’ve got a blog tour, some in-person bookstore appearances, a podcast interview, and several giveaways going on with this release. Today, step over to Rainbow Gold Reviews Facebook Event group—four authors have joined me for a launch party! There will be fun goings on, chances to ask questions, excerpts, and special giveaways. Here’s the link: https://www.facebook.com/events/482925622209965/. I hope you’ll stop by!

And here’s a link to a post where you can find all the blog stops and events over the next couple of weeks: http://queerlyya.rainbow-gate.com/ciarrahs-light-event-schedule-get-blog-tour-links-here/

Finally, here’s the rafflecopter giveaway. Enter multiple times, several ways to enter, including taking the “I love fantasy because…” poll. (My answer to the poll, definitely “all of the above.”)

Thanks again, Divine Magazine, for hosting me, and thank you every reader. I hope to see you around. 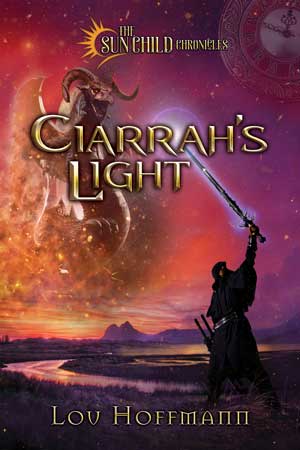 (All series books are available for review)

Cursed and exiled to Earth by a witch, Lucky has only his name, a pocketful of strange items, and the destiny to become the Sun Child and lead his world through its darkest time. In an epic adventure full of dragons, shifters, talismans, magic, alien enemies, shifting time, and wars waged for survival, humanity’s only hope is one young man’s unquenchable strength, spirit, and heart.

Luccan, future Suth Chiell of the Ethran Sunlands, also known as Lucky, has just completed a harrowing quest, but his adventures and hardships are only beginning. There’s little time to rest before his ghostly mother’s specter attacks, drowning Lucky in horrible nightmares that drain his life and nearly kill him. Only through the power of his enchanted obsidian blade, Ciarrah, can Lucky claw his way out of the shadowy visions and back to daylight. But further horrors await him when he wakes up, and his country needs him—their Sun Child—more than ever.

Unstoppable wraiths—products of an advanced but dying alien world called Terrathia—are attacking, and swords and arrows cannot stop them. Fortunately Ciarrah’s magical light can, and with his dragon-kin uncle Han, his winged horse, a horde of shifters from Earth, and the wizard Thurlock at his back, Lucky faces the enemy, determined to put an end to his mother’s destructive evil once and for all. But will stopping her end the horrors facing his world?

Reviews/Reader comments on the series

“This is an amazing series.  I'm really looking forward to reading more of it and I'd love to see this visualized.  For what it's worth, this is impressive—this is easily up there with McCaffery, Flanagan, and Jordan (easier to read than Wheel of Time though)….” — from an email to the author from Joe Bone.

“This story is magical, fantastical and sure to be a winner for young readers that enjoyed Cornelia Funke’s Inkheart series, Angie Sage’s Septimus Heap series, or even a touch of Madeline l’Engle’s A Wrinkle In Time books. The cover is striking and colorful, and sure to appeal to those skimming bookshelves for a fantasy series to remember.” —Mt Snow of Rainbow Gold Reviews (on book 2)

“The author perfectly blended old and new characters in this fantasy series. I think the best parts of the book were when Lucky was being heroic. I can't wait to read book three! […] I would recommend this book for ages 12 and up. If you like fantasy and fiction, you would love this book!” —Nictaf, reviewer at LitPick Student Book Reviews (on book 2)

Lou Hoffmann thinks of every individual as a uniquely faceted jewel, and she writes for readers of all ages and genders. She believes in love, believes in you, and believes in the magic of a good book.

Visit her on her blog: http://www.queerlyya.rainbow-gate.com