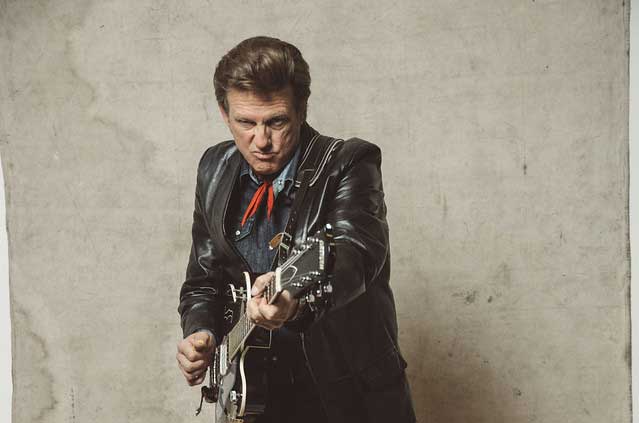 NASHVILLE, Tenn. —Friends and neighbors, let us gaze at 2019’s rear-view, as it pertains to the always entertaining founding father of Americana, Chuck Mead. He strolled a mess of stages in 2019, clad in classic country couture and committing heinous acts of Saturday-night rockabilly dance-hall honky-tonk glory. While doing so he found success and critical acclaim heaped upon his 2019 release Close to Home.

The reviews speak for themselves:

“The disc is like the best jukebox you ever heard in a sleazy, punky country bar, perhaps like the broken down Seeburg pictured on the back sleeve. Plunk down your quarter and wherever the needle falls, you’ll end up on the dance floor.” —American Songwriter
“Mead delivers these songs with understated soul and that’s what gives Close to Home its comforting spirit: it feels as cozy and nourishing as home itself.” —All Music
“Close to Home is pure joy, and Mead’s boisterous and high-spirited romp through the musical fields plowed by Lewis, Berry, and Cash, among others, carries us exuberantly along with him.” —No Depression
“Chuck Mead, a veteran of hopped-up country music since his early ’90s days with the youthful, knowledgeable revivalists BR5-49, has never felt the need to disconnect his sharp, roots-minded craft from its red-blooded rhythmic engine. In other words, he’s not looking to mellow out. After celebrating a historic Nashville studio space earlier this decade, he’s now made his Memphis album, Close to Home.” —NPR World Café
“I feel pretty damn good about the way Close to Home came out,” Chuck reflects. “I did it in Memphis at the Phillips recording studio. Not the Sun, [but] the one that Sam opened in 1962, and there’s all sorts of juju in that place.  Matt Ross-Spang produced the record. He was the engineer at the old Sun studio in Memphis. They have Pro Tools and all the modern digital technology if you want that sort of thing, but they also have tons of great analog equipment, and they can actually cut records there. They have their own vinyl cutting machine.”
In 1994, the Lawrence, Kansas native co-founded BR5-49, who famously got their career started by playing five sets a night, five nights a week at Robert’s Western World on the famous Lower Broadway strip in Nashville. The unorthodox approach helped launch a career that would last into the new century, rack up three Grammy Award nominations and be a part of the alt-country renaissance that would evolve into Americana music movement. He launched his solo career with his band the Grassy Knoll Boys in 2009 and the album Journeyman’s Wager. He is co-producer and has served as musical director for the hit Broadway show The Million Dollar Quartet. In June 2019, Close to Home (Plowboy Records) dropped and, as has been noted, garnered major praise.
“When I started playing music, I didn’t totally fit in with the hipsters, but I didn’t fit in with the mainstream, Chuck reflects, “but BR5-49 was afforded a huge record deal but still we didn’t fit in anywhere. And I think that’s kind of where I am, but there’s a lot of people who are like that. Nick Lowe doesn’t fit in with anybody else either, and I kind of love that.”
Close to Home outperformed past Mead albums, reaching No. 15 on the Americana Albums Airplay radio chart, with “Big Bear in the Sky” single reaching No.15 as well on the Americana Singles Airplay chart. Airplay of multiple cuts from the album continues internationally. “Close to Home brought Memphis and Nashville sounds together, giving Chuck’s vocals room to move and tell a story,” says Ben Ewing of Plowboy Records.
There will be bountiful opportunity to see Chuck Mead & His Grassy Knoll Boys pick and sing in their natural stage habitat between now and, oh, let’s say the middle of February. Don’t you dare miss him.
Tour dates
DEC. 7 SAT
Cosmic Honky Tonk Revue at The Caverns with Jim Lauderdale & Jason Ringenberg
Pelham, TN
DEC. 13 FRI
The Crimson Moon – Dahlonega, GA
DEC. 14 SAT
The Listening Room of Mobile, Mobile, AL
JAN. 18 SAT
Hernando’s Hideaway, Memphis, TN
JAN. 25 – 31
The Country Music Cruise– with Larry the Cable Guy, Randy Owen, Tracy Lawrence, The Oak Ridge Boys, Pam Tillis, Larry, Steve, Rudy / the Gatlin Brothers, Moe Bandy, Johnny Lee, T. Graham Brown, David Frizzell & John Berry
Fort Lauderdale, FL
FEB. 8 SAT
The Rockin Race Jamboree –with Doug Kershaw, Barrence Whitfield, James Intveld, Charlie Rich, Rosie Flores & The Blue Cats  Madrid, Spain