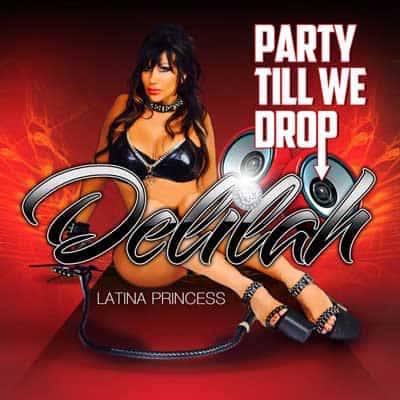 It’s the new MUSIC VIDEO that will take you back to the days that MTV actually showed music videos.

PARTY TILL WE DROP….The Latin Drive beats will take control of your body getting your hips and arse shaking!

Director/Producer: Pablo Pabanor Ortiz for Revelation Films Studios has captured the organic talents of DELILAH for the world to see.

Take a look at the MUSIC VIDEO PARTY TILL WE DROP below….

A bit about DELILAH~LATINA PRINCESS:

Born in Miami Beach to Peruvian and Finish Parents and now living in Chicago IL, she captivates her audiences with the fusion of different cultures and genres in a avate garde experience. DELILAH~LATINA PRINCESS Music is a mash up of EDM, LATIN, DANCE and TECHNO. Best put in her own words: “My father was a musician and song writer, but passed away when I was 9. My mother remarried to a Puerto Rican man I would say that is where I got my influences from. Every weekend, we would be dancing at some club to ole School Mexican, or salsa, or Meringue, shoving delicious Puerto Rican food in our mouths that his mom used to make for us in Humboldt Park. Almost every day, I would listen to Chilean woman sing,” Ay carino mio” it’s the only song I remember, but I know I would love the whole album. My cousin through marriage was Bobby Rosa. Who later became one of the singers in the band “Menudo”. Later my step father would become their manager. I love writing songs. That talent I appreciate from my father”

Away With The Fairies Day 6