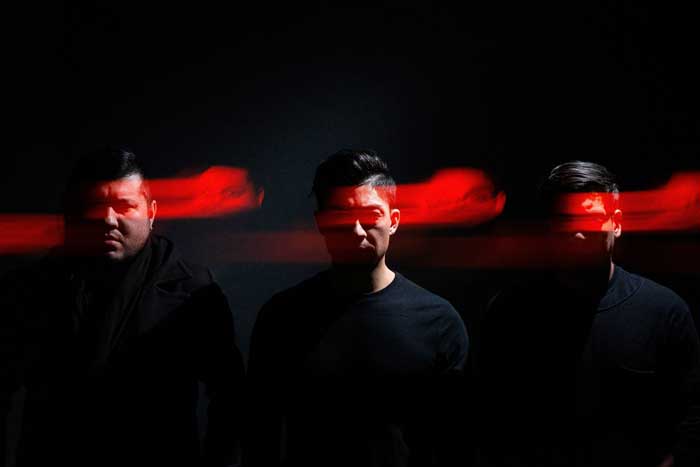 The new single from electronic group Matte Black entitled Pure is out now. The track was written during the global-wide shutdown due to Covid-19 and has spawned an introverted yet relatable sound. Featuring confident, fast-paced beats, dark melodies and haunting vocals, “Pure” emits a cinematic and industrial feel.

After years of performing in bands such as Julien K, The New Division, Moving Units and collaborating with heavy hitters such as DJ Ten, MATTE BLACK emerges from a dark unexplored corner of the San Diego underground to deliver their debut album I’M WAVING, NOT DROWNING. Inspired by the elements of the bands they have worked with and moving beyond them, Matte Black delivers a soundtrack of sinister pleasures for an uncertain world as if it was everyone’s last night on Earth.

Despite playing together for years, Alex, Bidi and Daniel had never collaborated on their own music. Thus, they made the decision in 2019 to combine years of production and performance experience with their diverse range influences to produce a fresh brand of mechanical tinged dance music. I’M WAVING, NOT DROWNING captures the band’s affinity for dark synthwave while complimenting it with epic, gritty industrial anthems and unabashedly embracing their love of underground techno. Respecting their influences, the band have recorded a cover of the Depeche Mode Classic, STRIPPED, which immediately summarizes everything Matte Black stands for musically and personally.

The record was mostly written and produced during the global shutdown due to Covid-19, and has spawned an introverted yet relatable sound that captures the feeling not just of the band, but by life in general. The band understood that if they created an album in isolation that touched on topics such as pain, panic and suffering they should also ultimately make it hopeful. To them, the title I’m Waving, Not Drowning isn’t the end, but is in fact, the light at the end of the tunnel.

Simultaneously tense and euphoric, their debut single, “PURE”, is a declaration of the Matte Black aesthetic as well as reflection of the world we live in today. According to Alex, “Pure” was “..written at my home studio in San Diego during this pandemic. There definitely is a lot of influence behind being quarantined, feeling despair and uncertainty. We made it a priority to make sure we finish this album as we have nothing holding us back.”