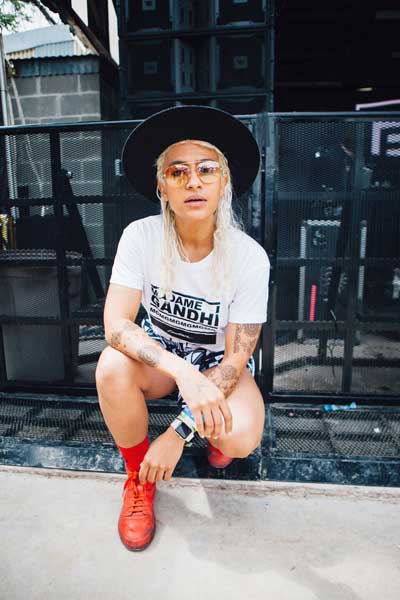 PALM SPRINGS, CA– Kiran Gandhi, known by her stage name as Madame Gandhi, is joining the stellar entertainment line-up of the 2018 installment of Club Skirts Dinah Shore Weekend, aka The Dinah.

Commemorating its 28th Anniversary March 28 through April 1, 2018, the Dinah is continuing this year its longstanding focus on Women Empowerment.

Mariah Hanson, founder and producer of the iconic event is assembling one of the most diverse rosters in Dinah history, celebrating female talent – from singers, comics, filmmakers, to DJs and beyond – who have broken the glass ceiling on their own terms.

The voice of a new generation, this female daredevil is making a lot of noise and already blazing an inspiring trail for us all to follow.

A champion of sisterhood and female empowerment, Madame Gandhi practices what she preaches. The electronic music artist and activist based in Los Angeles who has gained recognition as the iconic free-bleeding runner at the 2015 London Marathon, writes music that elevates and celebrates the female voice.

She uses her voice, music and written work to empower her audiences to be their best and most authentic selves.

Gandhi grew up between New York City and Bombay, India, playing drums and attending The Chapin School. She graduated from Georgetown University in 2011 with a double major in mathematics and political science and a minor in women’s studies.  While in D.C she also immersed herself in the vibrant music scene, once playing Bonnaroo as the drummer for the famed Thievery Corporation.

Between 2011-2013, she worked at Interscope Records for two years as their first ever digital analyst, studying patterns in Spotify and YouTube consumption behavior.

In 2013, Gandhi linked up with Grammy-nominated artist M.I.A. and began touring internationally with her as her drummer all across North America, Europe, Asia and Latin America. That same year, she was also accepted to Harvard Business School’s M.B.A. program, and so when she began school in the fall in Boston, was still touring simultaneously with M.I.A.

Eventually the tour ended, and Gandhi graduated from Harvard.

In 2015, she caused a media frenzy when she ran the London Marathon free-bleeding to combat period stigma around the world, sparking a global viral conversation about how we treat menstruation in various cultures.

She has since emerged as an activist and TED Talk speaker, who has fused her passion for music, technology and feminism into a solo music project, which she calls Madame Gandhi.

Taking the world by storm, Madame Gandhi is on a meteoric rise.

She recently opened for Ani DiFranco on her Rise Up tour; her South by Southwest performance was named one of SPIN magazine’s favorite of the entire event; and she just performed on an episode of Amazon’s new series “I Love Dick.”

She now continues to travel to perform and speak about modern gender equality, and is also working on her full-length album.

“The Dinah has always been infused with a subtle but powerful social message.  Finally, in the last few years, our very own internal messaging is resonating with the social and cultural landscape in the most exciting of ways, opening the door for The Dinah to stand out even more in its representation and celebration of all voices from all walks of life, “ says Mariah Hanson. “During this gigantic world-famous festival, we meld our differences into a collective consciousness that for five days defines our world as a diverse and inclusive place where we all can be who we are, as we are. We know our attendees feel that magic and bring that experience home with them. Our goal is for them to also realize they can live that ideology every day of their lives.  Madame Gandhi embodies this messaging and we are so proud to present her as one of our headliners, “

This is one “badasss” female artist you really don’t want to miss!

There’s no better place and time than The Dinah to support this new wave of women breaking down barriers with their voices and their sound. 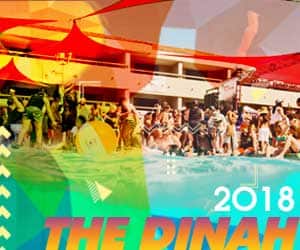 Get your tickets now: www.TheDinah.com