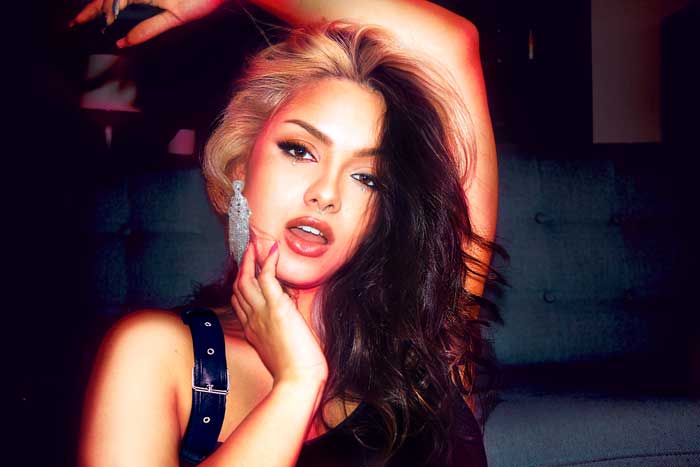 Bellsavvy is a rising pop star meets fierce Latin diva. Based in London the artist knows how to combine her latin roots and European influences to create a unique sound unlike any other.

Starting her career with MTV Brazil singing on the show “Studio Acesso Girls MTV”, Bellsavvy won over the hearts of over 1.8 million live viewers who all voted for her performance. Following her time on MTV, she was catapulted into the limelight, landing roles in movies, musicals and numerous musical projects around Europe.

Her debut single “Queen of My Mind” released earlier this year, received notable airplay from the likes of BBC Introducing and RTL. With her solid artistic identity being all about self-empowerment, she was labelled “the new fierce diva of 2021” by media around the globe, garnering support from the likes of Hollywood Life, GAYTIMES, PopDust and many more. “Queen of My Mind” saw Bellsavvy speaking about her experiences in the modelling industry and how she was shamed for her body weight. These dark and negative thoughts resulted in a loss of self-confidence and self-love leading to a mental breakdown. The track shined a light on the artist overcoming these inner-battles, resulting in a self-empowering anthem.

Now, she is giving us the second chapter. With her latest single “In My Zone”, Bellsavvy is shining brighter than ever before inviting listeners to find their own light and join her “in her zone”, where united we can all feel the power of owning who we are. “In My Zone” is an upbeat, energizing and self-assured song about being comfortable in your own skin and knowing your self-worth. Bellsavvy explains, “In my zone is about the moment I knew I was the Queen of my mind and I wanted to celebrate the feeling of breaking away from that chapter in my life.”

“In My Zone” oozes Latin fire and energy. With sassy, fun vocals the song is infused with uplifting, catchy spanish influence and fire, dance-worthy production by the multi-platinum producer Sky Adams (Doja Cat, HRVY, Kylie Minogue, Sigala). The track is lively, light-hearted and carries a cheeky essence, but the vibes of the track speak of body confidence and finding your inner badass; her honesty shows people every little sentiment of who she is.

Bellsavvy hopes to use her inspiring story to help people in need. Something which is more important now, than ever before, the artist is using her positive, high energy and uplifting vibes, in her honest and authentic lyrics to tell her story and connect with listeners on a deeper level. Her music has been hugely supported by LGBTQ+ communities around the world – a community who can empathize with the discriminations that she has endured. With the goal to encourage others to feel strong, beautiful, and uplifted, no matter what anyone else tells you, Bellsavvy is on a mission and no one can get in her way.