Kenny Long is living a new life. Blinded in an accident, he has taken control of his unexpected reality the best way he can, and it’s working out better than he hoped.

Of course Larry Boots doesn’t know any of that. All he sees is a beautiful man sitting on a park bench.

Larry has a few problems of his own: his mother. His job. The lack of romance in his life.

His job. In the course of that job, Larry strikes up a friendship with Kenny. The next thing he knows, he’s so head-over-heels in love, even his mother doesn’t seem so bad. Of course his career is still a problem, but he’s working on that. Hopefully he’ll have the problem resolved before the man he’s being paid to murder succeeds in murdering him first.

And before the man he loves finds out he’s a cold-blooded killer. 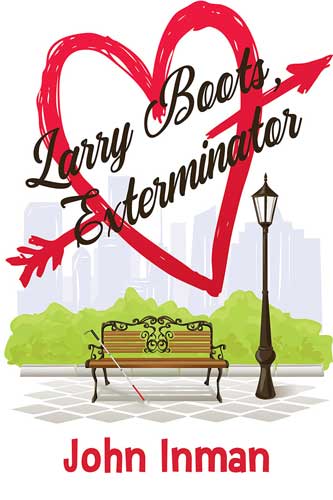 A sweet humorous love story to die for

Larry Boots, Exterminator is a stand-alone novel with all the humour, plot twists and unique MC’s I’ve come to love in John Inman’s writing. Combining the life of a hit-man with that of a sweet young man who does volunteer work with the newly blind, makes for an unexpectedly delightful read. Throw in a pot smoking, slightly crazy, mother and you have a story that will keep you entertained from the first page.

Larry Boots has been a hired hit-man since an unexpected tragedy turned his life upside down. He is relatively happy with the direction his life has taken, given that he provides closure for victims of heinous crimes. His career is not something he chose but Larry finds it impossible to say no to righting wrongs when the objects of his attention are clearly guilty and utterly lacking in remorse. With weekend visits to his delightfully wacky mother, and a nice nest egg building, the only thing lacking in his life is love. But who on earth would fall in love with a hit-man?

Kenny Long is adapting to his new life after being blinded in a car accident. He lives near the Blind Community Centre where he works helping the newly blind adapt, and his life is on track and satisfying, if somewhat lonely. Eating lunch on a park bench across from the centre Kenny certainly isn’t expecting to find love with the well built stranger who drops out of a tree nearby, smelling of Sea Breeze and onions. Taking a chance will take all Kenny’s courage, and some persistence from the instantly enamoured Larry. How can he resist a gorgeous man in a sweater vest and bow tie with intelligence and a great sense of humour to boot? Hiding his vocation seems Kerry’s only choice, but when love unexpectedly blossoms the truth may be the only way forward.

Despite his occupation Larry was an easy character to like. His career motivation was understandable and I certainly felt no sympathy for his ‘victims’. His relationship with Kenny developed at just the right pace and it was easy to accept that these two men belonged together. Honesty, understanding and trust were vital to them achieving a HEA but it was hard to imagine such a sweet soul as Kenny accepting a hit-man for a long term partner. Kenny also needed to accept that Larry didn’t see his disability as a hindrance to living a full and happy life. The journey they took was both funny and frightening. When the hunter became the hunted anything could happen and in order to work towards a HEA they first needed to survive.

Larry Boots, Exterminator was a thoroughly enjoyable read that I’d have no hesitation in recommending.

John Inman is a Lambda Literary Award finalist and the author of over thirty novels, everything from outrageous comedies to tales of ghosts and monsters and heart stopping romances. John Inman has been writing fiction since he was old enough to hold a pencil. He and his partner live in beautiful San Diego, California. Together, they share a passion for theater, books, hiking and biking along the trails and canyons of San Diego or, if the mood strikes, simply kicking back with a beer and a movie.

John’s advice for anyone who wishes to be a writer? “Set time aside to write every day and do it. Don’t be afraid to share what you’ve written. Feedback is important. When a rejection slip comes in, just tear it up and try again. Keep mailing stuff out. Keep writing and rewriting and then rewrite one more time. Every minute of the struggle is worth it in the end, so don’t give up. Ever. Remember that publishers are a lot like lovers. Sometimes you have to look a long time to find the one that’s right for you.”