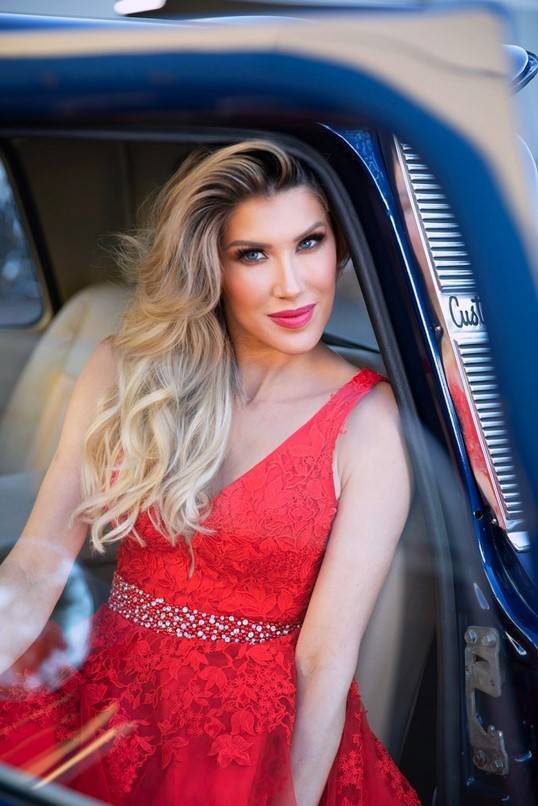 “What can I give, what actions can I take to be Life Changing. Make this world a better place. Life Changing, show somebody else some grace.” The song and lyric video is a heartfelt reflection of going the distance for someone in need, and realizing that all it takes is a little bit of giving and sharing to create a Life Changing experience this Christmas.

The sincere lyrics, penned by Kimberly Dawn, Brian Payne, and co-written with Grammy-nominated producer Kent Wells, who has worked with Dolly Parton, Reba McEntire, and Kenny Rogers, are a holiday anthem that brings to light the different types of giving we can do.

Christmas music is surely an all-time favorite once-a-year tradition, but “Life Changing” can be a song you listen to all year long. Not only is it a Christmas song, but it speaks volumes about how someone’s heart will be rewarded in return. That really is the true spirit of giving.

Kimberly says, “I knew that when I was writing this song that I wanted it to be powerful and thought-provoking. I love the way that Kent works as a producer because he really hears sounds and really knows how to pull a song together to give it that special sound.”

Tugging at your heartstrings, this song will leave the listener reflecting on what they can do this holiday season to help make a difference. There are plenty of ways we can help make the world a brighter place, whether it’s ‘giving, sharing, hoping, helping, and saving.’ The songs allow us to capture and express the joy, deviation, and inspirational spirit of the holiday season this December.

Kimberly Dawn is a country music singer-songwriter. Using her natural talent, Kimberly expresses an authentic message of perseverance, humility, courage, and resilience. Integrity, Honesty, and Strength are core themes in Kimberly’s songwriting. Songs such as The Bottle (101.4K views) and ’93 (375.2K views) are a great representation of her empowering songwriting. With 476.6K combined streams on Spotify, Kimberly’s song “Slow Dancing’ in the Dark” was nominated for Best Country Song at the 2019 Hollywood Music in Media Awards. Most recently, Kimberly Dawn released her new single and music video, “Deere John,” (106K views), which was featured on CMT Australia.

As a mother, Kimberly boldly took control of her musical passions after having her four children, when she began learning the guitar and piano. She feels particularly empowered to share her experiences balancing life as a mother and wife with her music career. As a National Alliance on Mental Illness (NAMI) ambassador, Kimberly strives to openly share the story of her own personal mental health journey to inspire and uplift others. Her song “The Bottle” highlights the real pain of those struggling with mental health and addiction issues.

LA Fashion, Nashville Country Music Magazine, Nashville Music Guide, The Tennessee Star, and New Music Weekly have featured Kimberly’s authentic and unique approach to country music. She has also been featured on popular podcasts such as “Everything with Ali Levine”. In May 2022, she partnered with MAGIC Tradeshow to perform on the opening day of their first ever Nashville MAGIC show. Kimberly currently has an ongoing brand partnership with Nashville, TN based vintage woman owned boot company Planet Cowboy. This past summer, Kimberly released a duet, “Do I Love You,” with Grammy Award-winning songwriter and artist Paul Anka. Paul has worked with notable acts such as Michael Jackson and Frank Sinatra.

Dead Horse Branding is an award-winning PR and Marketing firm in Nashville, Tennessee. At Dead Horse Branding, we create, design, and refine the many elements of brands, bringing together each moving piece to ensure the brand will strike the right chord every time. Branding is an identity developed via our DH7 formula; strategic planning, logo / image design, photography / visual assets, website, marketing / social media, publicity and licensing. We build an image and promote the brand all under one roof. Our branding abilities help us to work across a multi-range of industries including fashion, music, entertainment, culinary, interior design, business, franchises, construction and many more. Baha Men (Who Let The Dogs Out), LOVING MARY (Steven Tyler’s solo Band), Mushroom Records, Universal Music Group, Sony Music, HENDRIX Music Academy, TEDx, NAMM, Songwriting University, Bo Diddley Estate, Country Music Producer Tony Brown, Music Expo, The Today Show, HGTV, Interior Designer Kathy Anderson, Gigi Butler of Gigi’s Cupcakes, Lionesgate, and The Hallmark Channel are some of the brands we have had the pleasure of working with. We work with clients internationally, with headquarters in both Nashville, TN and Australia.

Interview with Maddie Leigh
Next Article