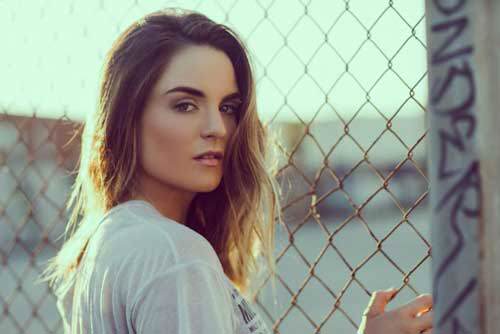 The three distinct singles titled “III.” are: “Say Love,” “Save My Soul,” and “When Love Hurts”; all of which will appear on her highly anticipated third album.

The not yet titled new album has already made a major impact, months before its official announcement. Both Buzzfeed and Fuse ranked it among their “Most Anticipated Albums of 2015” lists, with Buzzfeed noting the release could make JoJo “this year’s comeback kid.” The singles include an impressive roster of producers: the gorgeous power-ballad “Say Love” was produced by Harmony “H-Money” Samuels; The Family helmed the heartfelt track “Save My Soul”, and Jason Evigan and Benny Blanco took the lead on the infectious club-banger “When Love Hurts”.

Released when JoJo was just 13, 2004’s debut single, “Leave (Get Out),” reached the pinnacle on Billboard’s “Pop Songs” chart, making her the youngest-ever solo artist to have a #1 single in the United States. A true international smash, “Leave (Get Out)” earned RIAA gold certification as well as gold and platinum certification around the world. What’s more, the single’s companion video dominated MTV, VH1, Disney Channel, Nickelodeon, and The N, spending 50 days on MTV’s Total Request Live (including two atop the TRL countdown) while also leading to JoJo receiving a “Best New Artist” nomination from the MTV Video Music Awards – again making history as the youngest solo artist to be so honored.

2004’s RIAA platinum certified “JOJO” was a global phenomenon, with total worldwide sales now in excess of 3 million. “THE HIGH ROAD” followed in 2006 and proved an equivalent sensation, scoring worldwide sales of 3 million on the power of singles like the record-breaking top 3 hit, “Too Little Too Late.” After several years of legal dispute and a lawsuit filed against her former label, JoJo was finally released from her original recording contract.

JoJo’s immediately identifiable vocals were featured on records by such diverse artists as Timbaland and Pharrell. Her featured track, “Freq” on Pharrell’s chart-topping album “G I R L”, was celebrated by critics as one of the best songs on the album. Her own brilliant solo output continued with 2010’s “CAN’T TAKE THAT AWAY FROM ME,” an independently released mixtape which drew over 750,000 downloads in its first week online. “Disaster,” her next single/video, arrived in 2011 to great acclaim and chart success, celebrated by a series of international concert tours, radio festival appearances, and national TV performances.

As if all that weren’t enough, JoJo embarked on an acting career that included box office smashes like 2006’s Aquamarine and RV, the latter of which opened at #1 in its first week in theatres, as well as hugely rated TV movies (including Lifetime Television’s True Confessions of A Hollywood Starlet) and guest spots on series like CBS’ Hawaii Five-0.

JoJo celebrated her 22nd birthday in December 2012 with the digital release of her next mixtape, “AGÁP?,” followed the next year with a North American headline tour. In 2014, the singer released the critically acclaimed “#LOVEJO” EP which features stellar cover versions of songs by such Atlantic Records veterans as Anita Baker and Phil Collins. What’s more, JoJo stole the show at 2014’s South By Southwest (SXSW), her performance at the Fader Fort earning rave reviews from Rolling Stone, which declared the set to be among the “48 Best Things We Saw At SXSW”.