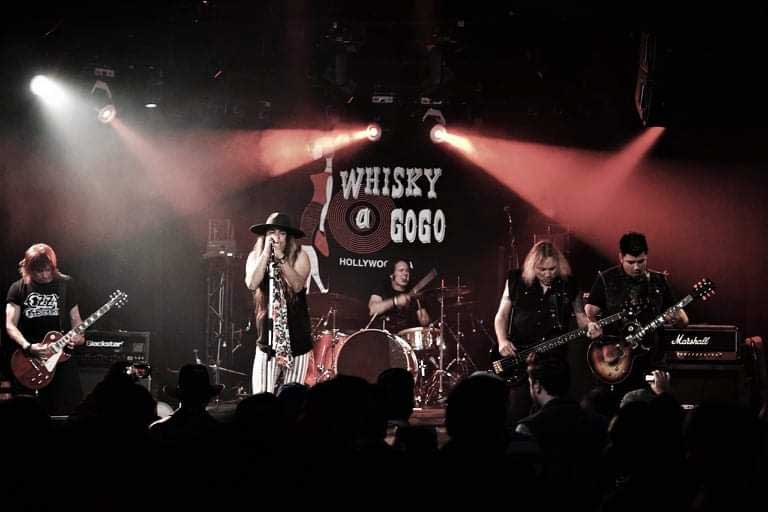 Rising Elijah is a high energy Hard Rock band from Los Angeles, CA. They’re riffy, fun, heavy and have a vintage attack with a modern feel.

After forming in 2019, they released their first single in January of 2020. They were featured on Heidi and Franks morning show on KLOS,  Stay or Go, and won.

Their Self Titled album was released on Rock Solid Talent Entertainment on 8/26/22.

Typically Raz, our guitar player, writes the riff and a ruff draft arrangement & sends it out –  we then all work on our parts and jam when we get together.

So we’re really open to working and create with whoever. A lot of our current collaboration is putting together good gig lineups; It’s fun to vibe out w/other folks, learn different methods n shit. So that being said we actually have a pretty exciting feature for our next project w/a killer shredder, a legendary shredder actually heh, we’re still keeping that under wraps, but I will say, we got some ‘bullets to spare,” in our clip now.

We’ve played all over LA and surrounding areas. The clubs on the Strip are always great – they treat us great. No least favorites here haha. Recently we played at a festival out in Camarillo which was cool. We stay pretty busy, we’re out in Tarzana at the Maui Sugar Mill Saloon on 11/14 and at the Viper Room on 12/17 to finish out the year.

Well so in one sense nothing right? We play rock n roll haha – butttt hard rock and rock n roll isn’t exactly in the popular realm of music these days, save for the major acts. There’s a decent amount of really good current rock/metal acts out here – but not like that,  like that. Ya know? So we’re bringing a classic vibe with a modern feel.

Everything is an evolution. Like, you set out with deliberate plans, but ya know, “life comes at ya fast,” right?  So ya gotta be able to roll with the punches. And if you want any kinda longevity, you gotta be malleable to culture, tech, and trends. All that. Like; Zeppelin came into an industry, different, much different than the one Jay-Z came into and again, very different from one, a band like Ghost found success in. I will say, if you’re good you’re good, but you gotta be able to adapt and progress with what’s going on out here.

So like Anything, there’s a double edged sword. We as a band appreciate that tech & social media etc have created a DIY space for acts and eliminated gatekeepers and such. Also, kinda, more importantly, opened up a space where fans can discover artists and bands in a way like never before. Now;  the debate about payout to artists is nothing new. We, as a band, have different ideas about it & we range in opinions, but ultimately, ya gotta use the tools available.

Oh, well we’ve put out a handful of videos for our singles already – check out our YouTube or www.risingelijah.com

What can we expect from you within the next 6 months? Are any releases planned? Future gigs?

Abso-f’n-lutely – we’re workin on our follow up project to our recently released Self Titled album, “Rising Elijah,” – and like we mentioned earlier, we already have a few surprises that we’re really excited about. Stay tuned!

Chase: the dude who played Selena’s dude in the JLo version.

Raz: Ralph Maccio – he already knows how to fake shred on camera and the cobra kai cross over would be amazingggg. Haha

What movie ending really frustrated you?

A: Well,  series, easy pickin’s, GoT; Chris and Chase bitched about it a whole couple rehearsals. Hehhh.

‌Foreclosure and Selling Your House: Do You Need a Lawyer?
Next Article