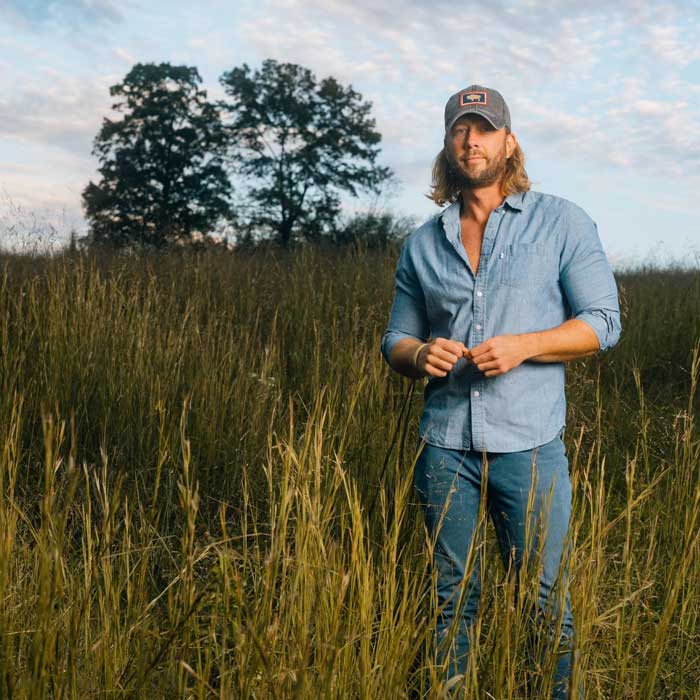 Thomas was born and raised in the mountains of North Georgia. The music that inspired him as a young songwriter is well-rooted in the past.

Thomas Fountain’s journey through life has proven to be a fountain of inspiration for raw and honest songs. The Peach State native has quickly developed a reputation for writing and singing timeless truths, building believers one performance at a time. With his rugged, raspy, passionate delivery, Fountain brings a live show that will undoubtedly move fans to their feet every time.

Getting to know Thomas

Not sure if it’s actually a trait but I tend to put too much faith and trust in people and it’s been extremely hard to reverse that over the years.  You absolutely have to be weary of pretty much everyone in the music business.  I guess I just grew up with the mindset that if people said they were going to do something or be somewhere, they always did. You earned trust that way.  I was raised to always do that and still do.  My circle gets smaller and smaller as I get older.

If you were to write an autobiography, what would it be?

Knocked down, just never stayed there.

I don’t really have expensive clothing.  I am a jeans and t-shirt guy so I’d definitely have to say my exotic gator boots.  A tax refund purchase from a few years back haha

Are you a valuable asset on a Pub Quiz Team?

Oh absolutely.  I know way too much useless information and love Jeopardy.  I also beat the employees at Bubba Gump Shrimp in trivia.  The amount of information I know about that movie is almost embarrassing.

Playing music full time as an artist came as a result of a very hard time in my life.  I felt like music was the only thing that understood me at the time.  It was an outlet and I used it to pour my heart into my lyrics.  Before going out as a solo artist, I played in various cover bands.  However, once I actually NEEDED music I found who I was as an artist.

My advice to aspiring artists would be to trust who you are as an artist.  Sometimes only you know the creativeness you have inside you and it’s there for a reason.  Trust it and use it and eventually it will impact someone.  Music and artistry is a gift, so trust yours and use it.

It seems that the higher ups within the industry want a ready made artist these days.  Simply because artists are able to do a lot of work themselves.  I wish the industry was still focused on the development process and raw talent rather than ready made numbers.  I want to be judged based on the 7 or 8 years I’ve spent perfecting my craft rather than if I went viral on a TikTok video.

Who are your top two favorite artists of all time?  Why those artists?

I would have to say, Alan Jackson and Merle Haggard.  To me, both are the best writers/artists that country music has seen.  I’ve always been infatuated with Haggards life and all his hardships.  He wrote such truth because it was almost like he didn’t know he wasn’t supposed to.  It’s just so real.  AJ to me is the most underrated writer in the country.  A writer gets a number one and that’s a really big deal.  He’s had like 20 something.  His life in general was relatable to me as well.  Just the way he grew up.

I am including being a writer in this question because there is also so much artistry in that.  There’s nothing like taken an idea out of thin air, putting it on paper, recording it, releasing it and impacting people.  I’ve seen my songs help people.  I had a fan who used my song “Mountain Climber” as her fight anthem to battle cancer in her last days of life.  Her family had shirts made saying “Mountain Climber”, “Keep Climbing”, etc.  That is an extremely powerful feeling.

What can we expect from you in the next 6 months?  Any releases planned?  Videos?

Well, on April 23rd I released my first real honky tonk drinking song called “It Don’t Matter”.  We shot a music video 2 days after that and it’s in the editing process as we speak.  It’s a super fun sing along song and the video was a blast.  My next single after that is called “Window Pane”.  Of all the songs I’ve recorded that I’ve written, it is probably my favorite.  It’s an extremely dark daunting song with a twist.  The production is phenomenal as well.  I’m very proud of that song.

It Don’t Matter is now available on all digital download and streaming platforms https://soulspazm.ffm.to/itdontmatter

Outfit Ideas To Look Cute Without You Trying On a Casual...

‘Ahz Moses is an RNB singer/songwriter, hailing from Houston,...

Whenever that special day comes around, it’s important that you and your spouse know a few different ways to celebrate your wedding anniversary.