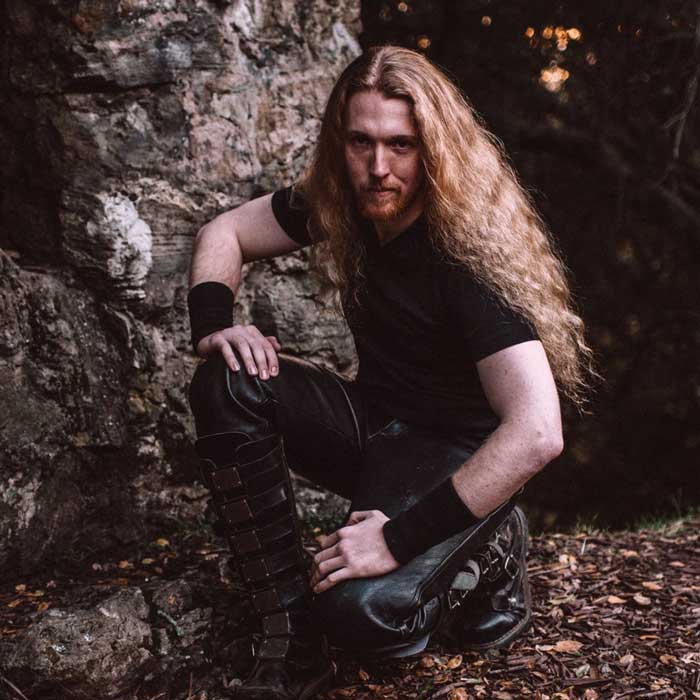 Jim Steinman, the main songwriter for Meatloaf’s hit album “Bat out of Hell”, and the classic 80’s hits “Holding Out for a Hero”, “Total eclipse of the Heart”, and many others will always be my major musical influence. Especially because of his very theatrical approach to songwriting that was very piano based and Wagnerian at the same time. In contrast, my other musical influence is the classical composer Bela Bartok.  Who I love is a beautiful, yet the chaotic approach to arranging pieces of music, most of which was derived from Hungarian folk tunes.  Other musical influences include Randy Rhoads, Tuomas Holopaninen, Andy LaRouque, Morton Veland, and Pasi Hitula.

Are you finding the isolation of the pandemic conductive to your writing or is it hindering the experiences you can write about?

The pandemic has definitely been a productive time for me, musically.  If anything, spending more time at home has encouraged me to spend more time with my instrument than I would when I was out and about working, and could only dedicate a smaller amount of time.  Having that larger time to my instrument meant more time to focus on technique, and overall, cleaner playing. Over that time the creative juices come into play, and that is what leads to the songwriting. We are fortunate to have the technology of nowadays where we can easily record ourselves and share files amongst band members.  That is how the bulk of our new album was written. Ultimately it got to the point where we had to vote on which songs would make it into the final product.

Our next big show is actually a festival. We are taking part in LA Burning Fest 3 in Los Angeles, playing with some heavy metal legends such as Riot V, Ross the Boss, and Tim Ripper Owens. This gig will take place at Bricks Rock Bar, which I have never played before, but am excited to check out! Last year we did a tour with Soulfly along the East Coast which brought us to a lot of cool new places as well. Probably my favorite on that run was Sunshine Studios in Colorado Springs.  Really good size stage with an awesome light setup, plus the food trucks outside the venue were an added bonus. Hard to say of any “least favorite venues” as experiences can always change from show to show.

Adrestia! That was actually the first song I had ever recorded for Niviane, prior to me joining the band, so because of that, I have a personal attachment to the song.  When we play it live, I thought it would be cool to spice up one of the guitar solos by doubling one of the harmony parts at the end. Plays out well, and the audience loves it!

As mentioned earlier, we did a lot of songwriting over the course of the pandemic. So earlier this year we started recording what we felt were the strongest out of those songs, and made it our third album.  We actually just finished recording all of the instrumental parts and vocals are going to be tracked starting in November. At this rate, I can see the record coming out some time towards the end of next year.

I have always been fascinated by ghost-like powers. Particularly because they are usually a combination of phasing through solid objects, turning invisible, and possessing other bodies. Not exactly sure what my superhero name would be though.

Does wearing an Elsa dress from Frozen count? Cause I wore that during 5k once.

Does Cards Against Humanity count? Cause that game is always a blast

BRE is Exactly Right on New Single IDNTBR
Next Article