LonelyTwin (Madelene Eliasson) is a Stockholm-based singer, songwriter, and producer. She releasing today her highly anticipated debut album This End Had No Beginning.

While the name LonelyTwin evokes longing (Madelene herself being a Gemini), This End Had No Beginning arrives fully formed: a genre-blurring combination of inventive trip-hop, smart indie pop, and evocative electronic folk that subtly slides between blue mood and hard-earned joy. Eliasson’s songs are spectral yet heavy with emotion, and her lyrics aim for an honesty that’s elusive in real life—like confessions whispered in the dark to the twin sister you never had—and demonstrated on previously released singles “I Will Be Better Than You At Letting Go,” “Pretty,” “Hurts Like It Hit Me,” and “If I Know Myself.”

“Eliasson proves herself as an artist with depth and dimension,
mixing acoustic warmth, heartfelt storytelling, and entrancing instrumentals together
into sensual confessionals.” – Under the Radar

“A Stockholm-based singer-songwriter with a knack for storytelling.” – Sweety High

“Blends a wide range of genres,
flowing together to an emotional and frisky acoustic journey.” – C-Heads 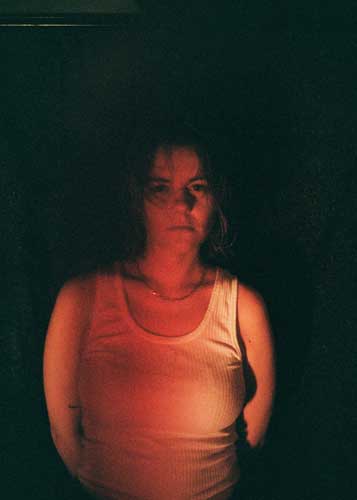 I’ve always played a ton of guitar, so that was how it started for me. Then I got really into artists like Joni Mitchell, Tallest Man On Earth, and Jose Gonzalez and that inspired me to start writing and singing. I just loved how they made their guitar playing into such a big part of their artistry! After that, my sound has moved away from being super guitar-focused, but it’s always gonna be a big part of my writing and sound.

I write and produce a lot for other artists as well, and I love doing that so much, but because of that, I don’t always have the time that I want to work on my music. So when I get the chance, it usually feels very free and exciting. I’ve been gathering song ideas for myself but haven’t had the time. I also work a lot by myself which I love because I really have the space to get into the music and what I wanna say.

I’m releasing an album on July 7 called This End Had No Beginning and I’m SO excited about that!! I’ve been working on it for a long time and it’s really special to me. I’m excited for it to not just be mine anymore.

I think I’ve always been very sure of what I like and what feeling I want my music to have. But, it’s still evolving and growing within those lines. I think when you listen to my music you can tell that I’m influenced by a lot of different stuff. But, it’s always a fine line to stay consistent and also explore different sounds.

What are your top two favorite albums of all time? Why those albums?

I’m a hopeless romantic who obsesses about love! And that I’m very gay.

Pasta all the way! Any kind

I would tell her to not be nervous about being herself. It’s a classic one but it’s so true!