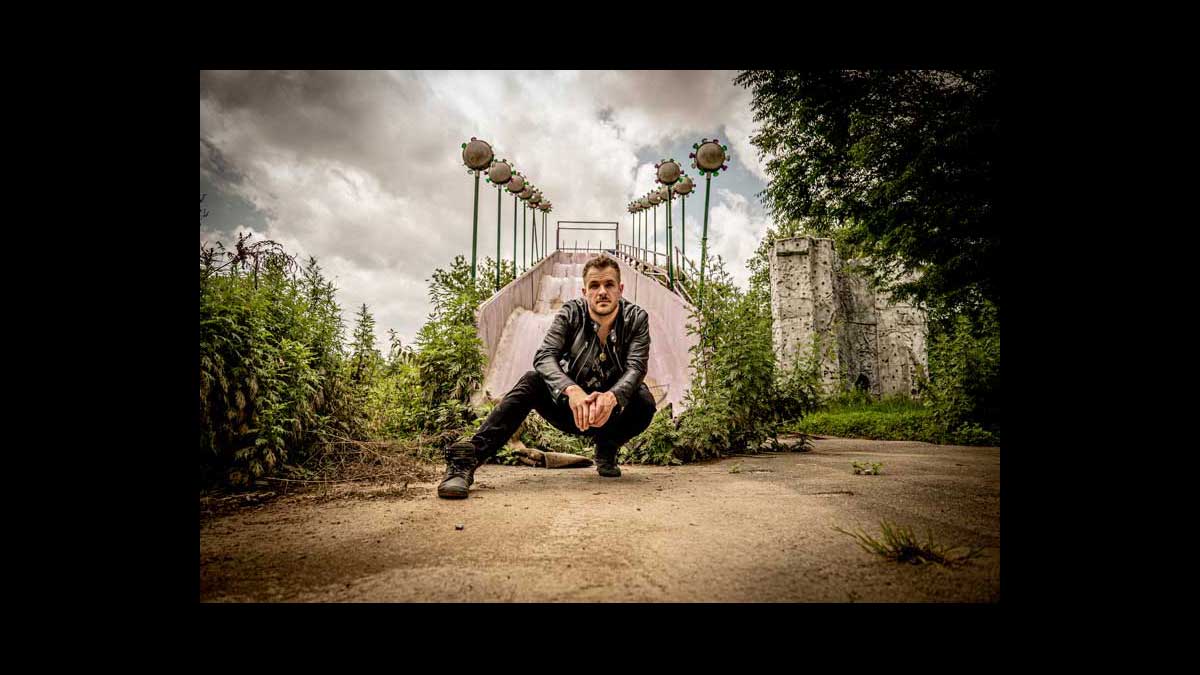 Hailing from Maryland, LJR is a tenacious and passionate pop-rock artist who strives to empower and inspire his audience to live their lives to the fullest. Seamlessly blending ‘80s-style pop beats with alternative rock guitar solos, his music is tremendously anthemic and infectious while conveying remarkable vulnerability, speaking to those parts of the soul that yearn to heal and grow.

My upcoming album “When the Sky Began to Fall” is my best work from the past decade and summarizes my journey through self-discovery, unearthing and healing from trauma, and changing unhealthy relating patterns in family, friendships, and relationships.

I Can’t Say is the first of 12 songs from his upcoming album, When the Sky Began to Fall.

I tend to find that I write songs when I have sort of a “surge of feeling”. I don’t always know exactly what it’s about until I start making chords on the piano and singing random lyrics, picking out the ones that feel the most right. I used to judge my initial lyrics pretty harshly and would feel a strong compulsion to over edit them, but over the past years, I’ve realized that when I write I am often connecting with something inside myself that’s in such an initial formative stage that I am not fully conscious of it yet. Because of this, I’ve learned to give myself a little more creative freedom and space free of judgement during that process.

I think my music is different because of three main factors. The first is my voice, which I think has a rougher and harsher texture to it than many voices. It took me a long time to like my voice, and I still struggle with it at times. The second is how much I love to use aggressive rimshot percussion on timbales and snares tuned really high up, turned up loud in the mix. Lastly, I like to collaborate with people who are really different from me, like my friend Gurpreet Sarin, an incredible Sikh trained in north Indian classical singing and tabla. Peter Gabriel did a lot of this type of collaboration (like on “In Your Eyes”) and I really fell in love with blending cultures like that.

I’d say track #3, called “Need a Little Lovin’”, is my favorite. Probably because of the bridge breakdown where the energy stays high while Gurpreet’s voice cuts through, I do a syncopated off beat drum fill, Daniel (my brother) rips an insane guitar solo, and Gurpreet follows it up with an additional vocal solo. It makes me so happy every time I listen to it!

The biggest thing is to focus on building an actual business and building real relationships with fans. Artists often have the perception that there’s limited room for successful artists because, so few make it. I don’t believe that at all. It’s not a zero-sum game. Most artists are not willing to learn how to run their music as a business, optimize it, and scale it. This means automating a way to build your fanbase and have meaningful interactions with them while also being able to scale and grow. It’s not easy, but it really works.

It was definitely from Marky Ramone from the Ramones. When my brother Daniel and I asked him for advice for aspiring artists on the way back from the Grammys in 2011, he said “If anyone tells you you can’t do something, tell them to go fuck themselves.”

Yes! There is a 12 video narrative series I’m making that accompanies the album. Like 12 chapters in a book. I’m really excited about this as it’s my first time doing more involved story telling with video; legit trying to act, direct, produce, do VFX in editing; a whole lot of new things I can’t wait to share.

The last one I binged hardcore this past week was Jupiter’s Legacy. Amazing show!! I’m so mad they cancelled it. However, the last episode I watched was one somewhere midway through Manifest season 1.

La La Land. Mainly because I didn’t feel they had to be apart to accomplish what they wanted to. I legit got really mad and sad about it. However, as I’ve spent more time really pursuing my career, I understand it just a little better. Though I’m still not totally sold they didn’t have another option.

I would encourage myself to really think about and go after what I wanted. I spent too much time living in a weird world where I thought if I gave others what they wanted, they would support me in what I did and help me find it. That didn’t happen, and really fucked up my relationships. Since I’ve changed that pattern, doing the self-reflection to know what I want and learning to communicate those desires, my relationships and career have improved dramatically.

Absolutely, but mainly as a math/tech person. I’m not great with history but give me numbers and I can be a solid team player.’