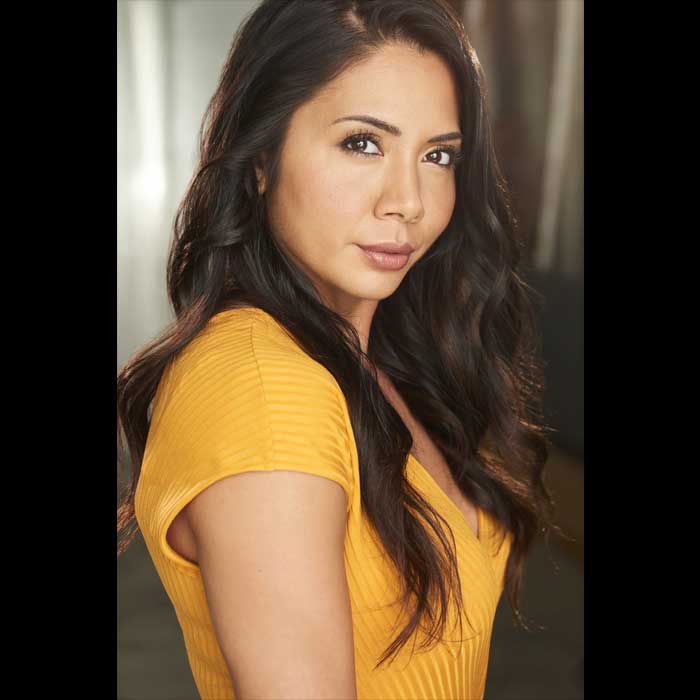 She has performed in many types of mediums such as theater, film, voice acting, and more.

Krystle is most known most for her notable and award-winning work on her short film “A Broken Tear 2012” (starring Zeina Makki) and on her feature film “Maskoun 2015” (in which she stars, directed, and wrote)

Getting to know Krystle

Tell us a bit about yourself and give some details about a typical day in your life.

A typical day for me is one that’s filled to the brim with activity. My roommate calls me the Energizer Bunny because she says I never sit still! I’m an early riser, and the first thing I like to do is call my friends and family in Lebanon and catch up with them, hear about their lives, and share a little of mine. I used to be a professor in Beirut before coming to Los Angeles, and I made such incredible lasting friendships with my students. I still love to speak with them and hear about where the last few years have taken them. Housework and chores take up the next few hours of my morning, followed by a trip to the gym for my regular workout. I’m a huge fitness fanatic and can’t even begin to describe the benefits of exercise in my life. My afternoons are dedicated to cooking lunch and then working on any auditions I may have, researching the roles, learning the lines, and shooting the self-tape. The pandemic has been overwhelmingly difficult for humanity as a whole and for the film industry. Still, one of the few benefits it has afforded us is the ability to audition virtually out of the comfort of our own homes. Just make sure to find a reader!

As a public figure, how do you think being hailed as a role model impacts on others, and what pressure does it put on you?

I have to be more calculated and more careful about the choices I make and the roles I take on. There are more eyes on me now, and it doesn’t pass me by that as a Middle Eastern and Filipino woman, the pressure is greater. I want to change how people view Middle Eastern women, transform the stereotypical archetype you see in films and on tv. The last thing I want is to escalate the bias that exists, and that means having to be a little more selective about what I do.

I would wave that magic wand and make time slow down for us all. Life goes by so quickly. Ferris Bueller had it right when he said we need to slow down and take a look around once in a while. In these fast-paced times, I really sense the need for us to live more in the present, not always looking forward or looking back. I think it would improve our lives as a collective enormously.

I’m a dreamer at heart, hopeful, optimistic, and perhaps compared to the typical LA crowd, considered naive. I left an entire life behind when I moved to LA, despite my fears and the protestations of the people closest to me. I suppose if there is anything I’d like to be remembered for, it’s that I did it, that it can be done. That we can tackle our fears and follow a dream, no matter how old we are, no matter what we’ve been through or what our pre-determined plans are. It has been a struggle, but I’ve also grown and changed in so many ways. You will never regret following a dream, whether it works out or not. You’ll gain everything just by having taken that journey.

Can you tell us about a time when you almost gave up, how you felt about that, and what you did instead of giving up?

Honestly, the onset of the pandemic last year brought me close to giving up, closing up shop, and heading home. The film industry was completely shut down, and auditions and jobs were impossible to come by. I was days away from packing my bags. I felt hopeless. This is a testament to the power of having good friends in your life because they sat me down and helped remind me of why I had moved to LA in the first place, of who I was when I made that choice. They reminded me that this would end and that there was light at the end of the tunnel. I realized I had to do everything that was in my power to stay and to survive, to explore every single option at my fingertips before resorting to returning to Lebanon. In the end, I buckled down, sold everything I possibly could, including my beloved RED camera, and that got me through those dark months. Any time you think you have no choice, explore a little further, and perhaps you’ll find a different answer.

I would absolutely want to fly! I know that must be one of the most common and unoriginal answers, but moving around this traffic-ridden city would be so easy and freeing! I’m a sucker for a beautiful sunset… can you imagine seeing them from above the city buildings? Just call me Shooting Star! I’d be the little flash of light in the sky shooting past at twilight.

I’m currently obsessing over Sofia Boutella! She’s Algerian, which would honor my Middle Eastern and Arab heritage, and she’s just so talented. I recently watched Gaspar Noe’s most recent film, Climax, and it was so brilliant, and she in it, that I had to watch it again the very next day.

The Serpent !! What a masterpiece. The acting, cinematography, aesthetics, and storytelling are all absolutely amazing. I was mind blown that this was shot during the pandemic, and they were able to pull it off. I highly recommend it; it is a must-see!

Lebanese food! There is this incredible Lebanese restaurant in LA called Sunnin, and any time I go there and dig into a plate of kebbeh makliyeh or fatayer or shish tawook, I’m immediately transported back to my family’s kitchen. Back to my childhood home. My father passed away several years ago, and he loved to cook and share food with loved ones. It’s something that connects me to him and makes me relive my memories with him. And, of course, there is no better dessert in the world than Lebanese baklava! I will fight you on this!

If you were talking to a younger version of yourself, what advice would you give yourself?

I’d want to tell myself to trust my gut and to trust life. Life will take you where you need to go, I have found. There is no need to settle for less than what you want out of fear. If you trust yourself and understand that in the larger sense, everything will work out, and you will eventually find your purpose and your place in the world, there is nothing to fear. Plans may fall apart, and failures may be had, but if you keep that dream in your heart as your guiding star, you will be alright.

What’s next for you in your career?

I am going to be the face of NRJI company which promotes safe testing kits at home, which will be publicised on TV all over LA and MIAMI, promoting safe sex and maintaining a healthy lifestyle. I am also set to be the be the voice-over artist who story tells the life of 4 Lebanese Artist struggling in LA to independent film that is set to shoot in Sept 2020 “Albna Beirut” translates to “Our Hearts are Beirut”. I am also working closely with the writer of Bonafide, where I will be voicing the story of two young boys who live in two very separate worlds. I am excited and looking forward for all these productions to take off.