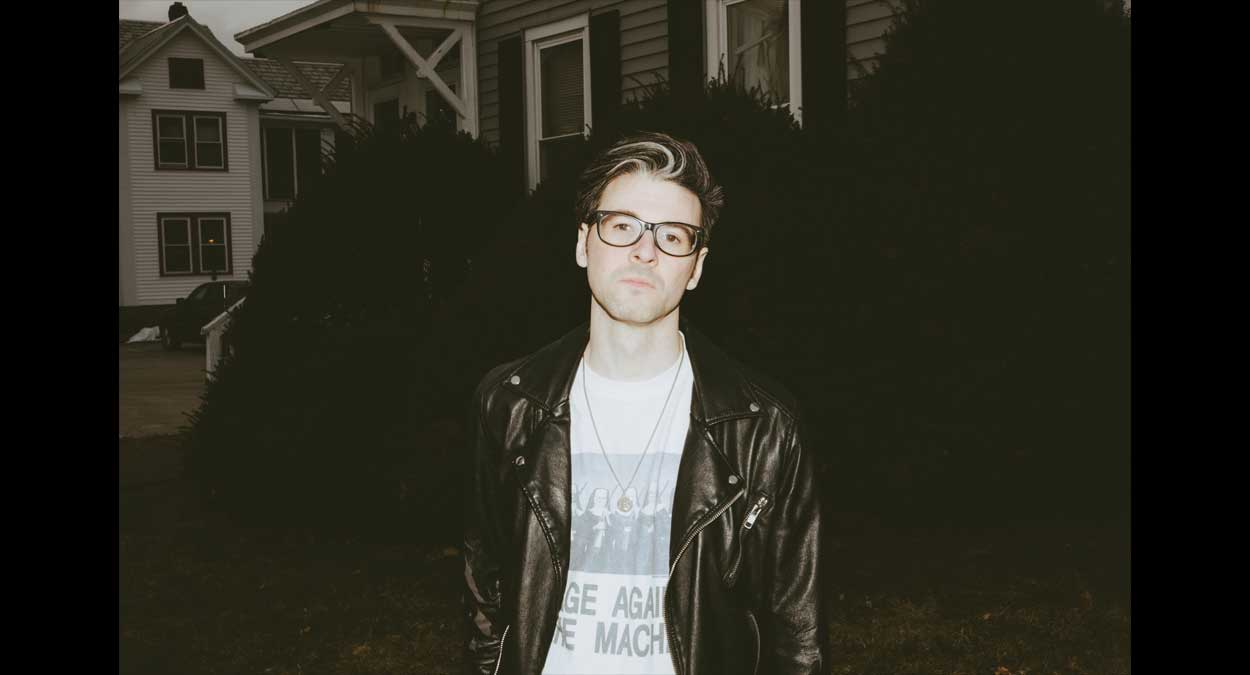 Jaws Of You is a new alt/emo outfit from front-man Anthony Rainville. Taking inspiration from artists like Phoebe Bridgers, The 1975, and Jimmy Eat World, Jaws makes loud, catchy sad songs that speak to his years of songwriting and being in touring bands, with all the requisite highs and lows.

Prior to Jaws, Anthony has spent time performing with the likes of All Time Low and PVRIS, and touring with You Me And Everyone We Know, The Spill Canvas, and We Are The In Crowd.

Both of my parents are musicians, so I found myself being exposed to music and performing at an early age. And although I loved pop and rock music growing up, I wasn’t interested in actually being in a band and writing music until I was in my teens. I loved Green Day and Weezer and all those bands on the radio, but I remember being 15 and hearing the record Losing Streak by Less Than Jake for the first time, specifically the song “Automatic”, and that was THE moment where I was like, “HOLY SHIT, I need to do this”. It was like, the first time you hear punk rock in a way that just captures you like nothing else has. And I was hooked. I felt a similar feeling upon hearing Blink 182’s Enema of the State, as well. And “Sex” by The 1975.

So for me, every song comes about differently, but it usually starts with a melody I hear. Sometimes it’s a line that pops into my head, or that I see somewhere, usually on the internet. And with the melody, I can usually hear a chord progression under it. Then I’ll kind of hum/sing dummy words over it, usually picking out a word or two that have some meaning, and write around that. Full lyrics usually come last, and it’s the part I hate the most. I’m dreadful at it and it takes me days to write like, a line. Sometimes they come with the melody, but usually not.

The process for me is also about listening to a lot of music I like, and it’s even better when you come across a new artist that you fall in love. That usually leads to me listening to their songs on repeat for days, and it ultimately informs and inspires what I do. A lot of the process is just sitting down and trying to write something, or fucking around on a guitar until something cool clicks. It can be tedious, but I find it necessary. I think I’ll have to write dozens of ideas before I get something that I really like.

I’d say simply evolved. It ebbs and flows with your life and your wants and desires. I think I’m always in a process of re-evaluating my life and what makes me happy, and how I define success. And more recently, I’ve felt overwhelming that I don’t want to make music in a way that burns me out, makes me unhappy, overly stressed, or takes away from experiencing other things in life. I’m really happy that lately there’s been this rejection of hustle and grind culture. It’s all that capitalist trauma shit, too – where you always feel like you’re lazy if you’re not working or producing something. Let’s be better and happier. Take a break, rest, relax, you don’t need to earn it.

The top 2 songs of all time are “1979” by the Smashing Pumpkins, and “Everybody Wants to Rule the World” by Tears for Fears. These are my all time favs because I can listen to them over and over again without ever losing the absolute joy and wonder that they bring to me. I think they each capture something perfect and timeless about their eras, and they’re just perfect songs to me. 1979 has that iconic guitar riff, perfect verses, chorus, and bridge, and these beautiful ambient layers that I still haven’t completely decoded. (Never mind one of the best music videos of all time). EWTRTW has another iconic riff, and these lush synth and bass layers, awesome solo, timeless lyrics – everyone know the song, you know it, we all know it. Amazing.

I am! In addition to music, I’ve also been acting for about six years. With music, I’m like, the captain of the ship, which is great, but it’s a lot sometimes. With acting, someone else is directing the ship, and I just have to focus one being great at this one thing. It’s still extremely challenging, but nice to not have to do it all.

Work hard and be nice to everyone. If you want to pursue it professionally, then make the best shit you can. Write a LOT. Keep doing it, and keep doing it even when you think you’re bad at it. And don’t give up. Half of it’s a perseverance game. Make a lot of friends, network without any expectation of getting anything.

ALSO, you can work hard, but don’t stress yourself out either! And try not to compare yourself to other artists. It’s hard, but you gotta resist the temptation to do so. Comparison is the thief of all joy. Your journey is your own, pay attention to you.

So I’ll be like, “I don’t believe in those”, and then refuse to ever walk under a ladder haha. Cause like, why chance it?